Common Pheasant and Relatives Content from the guide to life, the universe and everything 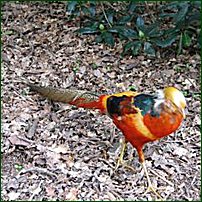 The common pheasant Phasianus colchicus, also known as ring-necked pheasant, is a large, attractive bird with a distinctive gold-brown striped tail. It is often seen on agricultural land or, more commonly, as roadkill. Many know the bird from its distinctive tail feathers which were a regular adornment of men's headgear, and small tufts of breast feathers were also used in trilby hats. It is primarily a captive-bred and popular game bird, often found as a brace1 in quality butchers and game-merchants around the Christmas period.

Like all living organisms, the common pheasant is classified according to its physical characteristics. This is known as its taxonomy. All birds share the same basic features:

The common pheasant is further classified as:

This is a popular and common game bird, measuring 53 - 89cm, with a long tail of 20 - 47cm and a wing span of 70 - 90cm. It has very short stubby wings which make flight short and erratic but strong. The male is bulkier and has a longer tail than the female; its head and neck are a distinctive, iridescent bottle-green with a bare red wattle behind the yellow bill, extending to the ear coverts. There is a slight crest at the back of the head, and often a white neck ring2. The upper parts of the common pheasant are brown and spotted black, tapering to grey towards the tail. The female, in contrast, is a dull mottled brown, lightly speckled with black.

The nest consists of a shallow unlined depression. The eggs are laid from mid-March to early June and consists of a clutch of 7 - 15 oval olive-brown eggs. The chicks hatch at 23 - 28 days, and are fledged. The young can fly at 12 days with full independence within 80 days.

The common pheasant is omnivorous, and although the main food source is grain, berries, seed and other fruits it will also eat arthropods, molluscs and small invertebrates. The call is a 'grogEURK...gogEURK...grogEURK', emphasising the 'EURK.' This call is usually heard as an alarm call; otherwise the bird is largely silent. It prefers wooded and agricultural land. Both genders are gregarious and monogamous, although females may flock in winter.

The common pheasant is a native of Asia, where its range stretches from the Caucasus to China. It is believed that the Greeks introduced it into Europe, but the date of its introduction into Britain is uncertain. It is commonly believed that the Normans imported the bird during the Norman Conquest as a popular food source, though there may also have been an unsuccessful introduction by the Romans. Proof of the latter is scant. It was a wealthy person's bird until the 17th Century, when gamekeeping and shooting became very popular, and many perceive that to still be the case. The offshoot of this was volume breeding to the extent that, today, in excess of two million birds are artificially reared each year, making wild population estimates impossible, and this may indicate that a wild population does not now exist. For this reason, it creates divisions within the birding fraternity as to whether the bird should be included on the official British Bird List of the British Trust for Ornithology or not.

The shooting season starts starts on the 'Glorious Twelfth', which is 12 August, and the season continues until 1 February the following year. After that is what is called the closed season, to allow for the breeding and rearing of birds for the new season. This includes pheasant, partridge, quail, grouse and all other game birds.

At the start of the 20th Century, gamebird shooting went from a totally elitist sport to a billion-pound industry. For example, a party led by King George V killed 3,937 birds in one day in 1913. This, in turn, created a large amount of investment in the birds' environment, breeding, care and stewardship. It also has a cross-over into the agricultural world, and in some areas the two cannot easily be separated.

Bird husbandry has created excessively high populations ranging from 10 to 20 birds per hectare, as opposed to a natural density of 0.1 birds per hectare. 20million birds were released in the UK, based on a 1990s estimate, although accurate figures are not maintained. Release figures are also assumed to double every five years. Of the birds released as many as 90% may fall to a hunter's gun. Another downside for captive-bred birds is that when released into the wild their life expectancy is half that of truly wild birds - although defining a truly wild pheasant today is almost impossible - and it can be reasonably assumed that all pheasants are now directly, or indirectly, descended from captive releases. The main causes for their poor survival rate are lack of experience fending for themselves, due to being fed and housed, and not having an inherent natural response to predators. This predation has subsequently led to the employment of gamekeepers to reduce the level of predators as well as other stock management. It is estimated that five million birds and animals are legally killed annually in stock management, while in the period of 1990 - 1997, 2,300 birds of prey were reported killed to the RSPB. In one year the RSPB had 118 incidents of poison misuse and 174 shooting and assorted killings reported. In 1997 alone, eight red kites, nine peregrine falcons and a golden eagle were reported killed. The situation has reached a level where the hen harrier is almost extinct in the UK, despite the efforts of the Royal Society for the Protection of Birds and other organisations working to protect endangered birds.

Around 12 million pheasants are estimated to be crippled by shooting, with the expenditure of 75,000 tonnes of lead shot expended each year, itself causing problems by animal and bird ingestion. In the mid-1990s it was estimated that there were 57,000 people actively shooting in the UK, at 52,000 listed shoots, employing 5,000 gamekeepers. A shoot typically cost £1,000 per day. When it is sold as meat, often in good butchers and game shops, it is sold as a brace (a male and female bird together) and they are often hung to enhance their 'gamey' flavour.

This is a really vibrant bird, and is, in every sense of the word, truly gorgeous. It is a native of the central Chinese Mountains. The distinguishing feature is its golden/yellow crown, nape and throat, forming a distinctive helmet not dissimilar to a Samurai's3. It has a red breast, belly and rump with, to varying degrees, iridescent green and blue wings. The tail is long, in brown and black. Although introduced into Europe, it only appears to have had breeding success in Britain, from introductions during the 19th and 20th Century. The birds are solitary, and confined to the east and south-east of England, with an estimated population of 2,000. The bird is becoming rare in its native home.

Lady Amherst's is duller than the golden pheasant, but very similar otherwise. It has a much longer tail, compared to body length and, like the bird's plumage, this is silver and black. The head is black with a red rear crown, and a black and silver nape. The breast is green and the belly white. The rump is yellow and red, the wings blue and green. It is a native of south-west China. The bird appears to be restricted to Bedford, and is in decline, with an estimated feral population of around 100 pairs. It is very elusive, and may need protecting due to a crash in numbers of its native population.

1One each of male and female birds.2This may be absent due to cross breeding with the green pheasant, Phasianus versicolor.3The link between the two appears to be apocryphal.