Egyptian Goose Content from the guide to life, the universe and everything 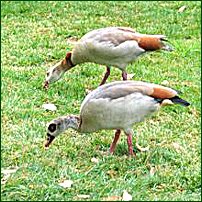 The Egyptian goose Alopochen aegypticus is a member of a family that is composed of a large number of goose-like waterfowl, classified as semi-terrestrial long-necked birds.

It is not actually a goose but a shelduck of which there are 14 species in the family. The shelduck is best described as fitting midway between geese, the Anserinae, and ducks, Anatidae. The Egyptian goose is native to sub-Saharan Africa and is the most widely distributed tropical African waterbird. It lives in wetland up to 4,000m in altitude, usually by lakes and rivers. It is found in parklands and pasture in the UK. It can be easily identified by its buff plumage and distinctive eyes, with the male appearing to be wearing spectacles, and having a brown 'brood' patch. It is unlikely to be confused with any native waterbird found in the UK.

Like all living organisms, the Egyptian goose is classified according to its physical characteristics. This is known as its taxonomy. All birds share the same basic features:

The Egyptian goose is further classified as:

The Egyptian goose is a large bird, measuring 66 - 72cm when fully grown, with a wingspan of 134 - 154cm. It has a pinkish buff head with a chestnut eye patch, neck, collar and breast patch. The upper parts are a rust brown; the under parts are paler. The tail is black-brown. Like the ruddy shelduck, it has a white inner wing, and the two can be easily confused when in flight. The legs and beak are pink, while the beak has a black tip.

The nest varies depending on location, but is generally in vegetation. It has also been known to make use of rocks and tree hollows. Ground-based nests are grass-lined scrapes, while burrows have a twig and leaf-lined nest.

The Egyptian goose is primarily vegetarian, feeding on grass, leaves, seeds and arable crops. It may include invertebrates in its diet.

The adults appear to bond for life. They are gregarious, becoming very territorial when nesting, often in family groups, which can be large and discreet. Big flocks can occur where large populations exist, or during courtship and mating. This is noisy and demonstrative, with a great deal of same-sex aggression. The bird is generally silent, with different calls between the sexes. The male has a wheezy husky laboured call, while the female has a more quacking, honking call, loud and strident.

The 'Gambo-Goose', or spur-winged goose, as it was previously known, was first recorded as being introduced by King James, for his Royal collection in St James's Park, in 1678. The majority of the birds that were introduced appeared in the 1800s from the Cape of Good Hope. Once introduced they became very popular in large estates with birds being recorded at Bicton and Crediton in Devon, Gosford in East Lothian and Woburn Abbey, Bedfordshire. Around 90% of the British population is found in Norfolk, notably Blickling, Guntra and Holkham. It has been suggested that they thrive in this area as it most closely resembles the African Savannah. It has taken 300 years to be accepted by the British Trust for Ornithology's British List. The Norfolk population is believed to number 280 - 400 breeding pairs, and are slowly spreading south and west, with noted breeding reports in Essex (1979), Somerset (1982) and Cambridgeshire (1988).

1A category lying between subfamily and genus.2Three other birds in this genus, all originating in the Madagascar region, are extinct.