Jimi Hendrix - the Musician Content from the guide to life, the universe and everything 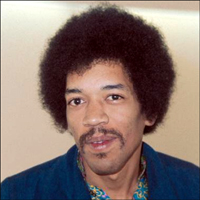 Jimi Hendrix (or James Marshall Hendrix to give him his full name) was a massively influential left-handed guitarist who burst on to the international music scene in the year 1967.

Jimi was born Johnny Allen Hendrix at 10.15am on 27 November, 1942, at Seattle's King County Hospital. He was later renamed James Marshall by his father, James 'Al' Hendrix.

He loved science fiction and often based his songs on interplanetary landscapes and alien wanderers. He had an incredible sense of humour, was extremely earthy and could play the blues like nobody else could. He was 'discovered' by Chas Chandler, ex-bass player from The Animals, at the Café Wha, a small venue in New York.

Unable to read or write music, Hendrix used the recording studio like no artist before him. Overflowing with new ideas, Jimi's desire to preserve them on magnetic tape became an obsession. Be it hotel room demos, nightclub jam sessions recorded on his hulking Sony or Teac open reel machines, or formal sessions staged at Olympic, The Record Plant (the famous recording studio in Los Angeles) or at his own Electric Lady Studios, Jimi relished the security of having saved every single note.

The Experience's first single 'Hey Joe' spent ten weeks in the UK charts, topping out at the No. 6 spot early in 1967. The debut single was quickly followed by the release of the full-length album Are You Experienced?, a psychedelic musical compilation featuring anthems of the generation. Are You Experienced? has remained one of the most popular rock albums of all time, featuring tracks like 'Purple Haze', 'The Wind Cries Mary', 'Foxy Lady', 'Fire', and of course 'Are You Experienced?'.

Although Hendrix experienced overwhelming success in Britain, it wasn't until he returned to America in June 1967 that he ignited the crowd at the Monterey International Pop Festival with his incendiary performance of 'Wild Thing'. Literally overnight, The Jimi Hendrix Experience became one of the most popular and highest grossing touring acts in the world. Hendrix followed up Are You Experienced? with Axis: Bold As Love. By 1968, Hendrix had taken greater control over the direction of his music; he spent considerable time working the consoles in the studio, with each turn of a knob or flick of the switch bringing extra clarity to his vision.

Albums recorded with The Experience

Releases after his death

Imagination is the key to my lyrics. The rest is painted with a little science fiction.

My goal is to be one with the music. I just dedicate my whole life to this art.

If I'm free it's because I am always running.

Music makes me high on stage, and that's the truth. It's like being almost addicted to music.

He played his own shit, he didn't play nobody else's stuff like they do now. Jimi was original.
- Albert Collins

I didn't have an affair with him - it's my only lasting regret in life.
- Marianne Faithfull

He was very self-effacing about his music but then when he picked up that guitar he was just a monster.
- Paul McCartney

For more information, check out The Official Jimi Hendrix website