The Evolution of Hot Dogs Content from the guide to life, the universe and everything 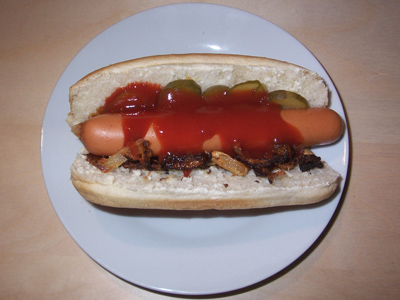 Long before there were hamburgers and milkshakes, there were hot dogs1. Yes, that's right - the world's first fast food was the humble 'ballpark hot dog'.

The Origin of the Hot Dog Sausage

The sausage, it seems, has always been a popular food for mankind. It was a favourite fare back in the time of the Romans, and it certainly was a treat to King George VI of England (1895 - 1952) who ate his first hot dog in 1939 at a picnic organised by the Roosevelts in Hyde Park2.

The history of the baseball stadium or pavement stall hot dog can be traced to the year 850 BC where it was mentioned in Homer's Odyssey:

As when a man besides a great fire has filled a sausage with fat and blood and turns it this way and that and is very eager to get it quickly roasted...

It is said that Emperor Nero Claudius Caesar's cook discovered the first wiener some time around 64 AD. Back then it was the custom to starve pigs for a week before slaughtering, to ensure that they would be clean and fit for eating. One roast pig that passed through Gaius's kitchen had apparently by-passed the cleaning process. Gaius slit the pig's belly to check if the pig was fit to eat, and was duly surprised when the pig's intestines fell out - puffed out and hollow. He exclaimed, 'I have discovered something of great importance', stuffed the intestines with ground venison, and ground beef mixed with cooked ground wheat and spices then tied them into sections. The first wiener was born.

At the time, sausages were associated with a Roman festival called Lupercalian. The Lupercalian Festival was celebrated on 14 and 15 February and was the predecessor of the modern-day Valentine's Day. It included a sexual initiation rite, so it is hardly surprising that, when Catholicism arose and Constantine the Great embraced Christianity in 325 AD, he completely banned sausage consumption.

The sausage was not seen again publicly until the 15th Century, when the Germans in Frankfurt developed the frankfurter - thick, soft, fatty sausages that Constantine would have hated. However the modern type of sausage only came into existence in the 1690s. It was created by a German butcher named Johann Georghehner, who subsequently went to Frankfurt to promote this new food.

German immigrants brought frankfurters with them to the US in the 1860s, where they were sold with milk rolls and sauerkraut from a push cart in New York City's Bowery. It was there that the frankfurter would evolve into the hot dog that we all know today.

How the Frankfurter Acquired a Bun

In 1880, a German named Antonoine Feuchtwanger was peddling hot sausages in the streets of St Louis, Missouri. His sausage business was not going well, and because the sausages were piping hot, he felt obliged to provide a white glove with each purchase so that customers' hands and fingers would not get burned. This, of course, did nothing to raise his profits. His more practical wife suggested that he cut costs by putting the sausages in a split bun, which his baker brother-in-law dutifully supplied in the form of long soft rolls that fitted the shape of the meat.

Despite HL Mencken's derogatory description of them as 'same rubber, indigestible pseudo-sausages that millions of Americans now eat, and they leaked the same flabby mustard', these hot dogs (called 'red hots') did extremely well in the American society. Visitors who went to the 1893 Columbian Exposition in Chicago consumed massive quantities of them and, in the same year, these red hots became the standard fare at baseball parks3, and would continue to do so until today.

Nobody is entirely certain where the term hot dog originated. It is said that in 1902 a sport's cartoonist by the name of Tad Dorgan was at a Giants baseball game, desperate for ideas as his deadline approached, when he heard concessionaire Harry M Stevens cry out, 'They're red hot! Get your hot dachshund sausages while they're red hot!' Inspiration struck, and he hastily drew a cartoon of barking dachshund sausages nestled warmly in rolls. However, his spelling was fairly poor, a problem he solved by simply writing 'hot dogs'! Alas, this cartoon has never been found.

Other sources credit Adolf Gehring as the inventor of the term hot dog. According to this legend, Gehring, a food and drink vendor at a St Louis ball game, had run out of ware and was forced to visit a baker to buy bread, as well as the butcher for sausages and wieners. The baker had only long dinner rolls, which the desperate Gehring bought. Having cooked the meat on a portable wood stove, he started making his rounds in the park. One man apparently hollered, 'Give me one of those damn hot dogs', and soon practically everybody else in the crowd were calling out for hot dogs.

Of course, these stories are apocryphal, and we may never know the truth. But does it matter? Somewhere, somehow, someone thought of the name, and thanks to them the hot dog today refers not to a canine in heat4, or one that has been stuck on a spit, but a fat, juicy sausage nestled in a bun with mustard, ketchup and sauerkraut, that even the King of England was not too proud to enjoy.

Thanks to Quality Management and Quality Assurance, the contents of today's frankfurters are regulated by law. Traditional meat hot dogs are made of beef, pork, veal, chicken or turkey and are permitted to contain up to 30% fat and 10% added water. They come in both the skin and skinless variety. There is also the vegetarian tofu hot dog for those who abstain from eating meat but would nevertheless like to enjoy a 'dog'. The size varies from frank to frank - the smallest being two inch cocktail wieners and as big as one foot long Viking Hotdogs, although you would normally find six inch long franks in your local cold storage, in packs of ten.

There are basically four hot dog terms regulated by law:

Hot dog buns and garnishing will differ from place to place. However, the law has regulated these hot dog style terms:

Where Can One Get a Hot Dog Today?

The answer is anywhere! There are plenty of fast food restaurants that sell hot dogs these days - A&W, 1901 Hotdogs, etc and of course the Original Coney Island, as well as the many pavement hot dog stands that can be found right around the world. Ballparks are a good place to go to if you want traditional ball game hot dogs. But unlike before when you had to go out to a stand to buy a hot dog from a vendor, these days you can simply pick up a pack of franks (plain, stuffed with cheese, etc - you name it!) from the cold storage, or canned cocktail wieners from the shelves, and make your own at home. Most supermarkets also carry hot dog buns in the bread section, not to mention mustard, ketchup, sauerkraut and practically everything else you need. And, unlike olden times, recipes for sausages and franks are now available everywhere from traditional recipe books to Internet websites. Your craving no longer has to be fulfilled by walking out of the house.

And yet... sometimes a hot dog tastes so much better at a ball game than at home.

1Also known as the frankfurter, frank, weenie, wienie, wiener, dog and red hot.2He was apparently so taken by 'this delightful hot dog sandwich' that he asked Eleanor for another.3The tradition of baseball game hot dogs was started by St Louis bar owner Chris Von de Ahe, who also happened to own the St Louis Browns major league baseball team.4Although, the literal German translation - heisser Hund, would mean 'dog in heat'.5You can find it in other fast food restaurants though, such as A&W.