The Sunflower Content from the guide to life, the universe and everything 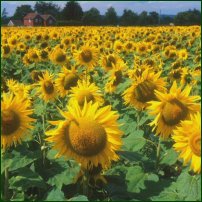 Keep your face to the sunshine and you cannot see the shadow. It's what sunflowers do.
- Helen Keller

The scientific name for the sunflower is helianthus1, which comes from two Greek words, helios meaning sun, and anthos meaning flower. They belong to the Aster family. Interestingly, some sunflowers have 89 petals, which is a Fibonacci sequence number (a figure formed by adding consecutive numbers from zero2).

The glorious bloom follows the Sun's apparent path over the Earth (phototropic), as if worshipping a god. Sunflowers are one of the plants3 associated with the zodiac sign Leo the lion (23 July to 22 August) because of their mutual relationship with the Sun.

The Linnaean classification of the plant is as follows:

The sunflower is a perennial plant: seeds can be sown straight into well-drained soil in the spring, positioned for full sun. Easy to grow, they brighten up the most forgotten, neglected places. They need a lot of water. Sunflowers are fast-growing4, undemanding plants, so are ideal experiments for children. For a small amount of work, you will be rewarded with a majestic plant which will attract butterflies, bees and birds to your summer garden.

The tallest sunflower ever recorded grew to over 25 feet (8m), although there are contests every year to try and beat this. The world record for growing the largest sunflower head, at 32½ ins (0.83m) diameter, belongs to Canada. Miniature sunflowers can be grown using the Bonsai technique.

Use crop rotation in your garden to avoid diseases like Sclerotina (white mould) which makes their stalk and head rot. Other diseases to watch out for are downy mildew and rust. Pesky insects like moths are attracted to the sunflower head at flowering time; their larvae feed by tunnelling through the seed. You can protect your sunflowers by covering the heads with plastic netting which should also deter birds. Sunflowers are ready to harvest when the back portion of the head turns brown.

Originally sunflowers were bright yellow-petalled with dark brown centres, but varieties have been cultivated which have dark yellow, tan, orange, maroon or striped petals, and dark green-yellow centres. Low-pollen sunflower varieties were introduced to enable hay fever sufferers to enjoy them, with the added bonus of providing a longer-living flower.

'The Joker' is pollen-free and has a large, double bloom. If you can imagine a star at the end of its life exploding and creating a supernova in red and yellow, that's what this magnificent flowerhead looks like.

The flower meaning for dwarf sunflower is 'adoration' (or 'adulation') and the tall sunflower stands for 'false riches' or 'haughtiness'.

The sunflower is the national flower of Russia and Peru, the flower representative of the city of Kitakyushu, Japan, and the state flower of Kansas5. The French name for the sunflower is tournesol (turn with the sun); in Spanish and Italian it is girasol; the Polish call it slonecznik; the Welsh know it as blodyn haul; Dutch is zonnebloem; Bosnia and Croatia call it suncokret and the German name is sonnenblume. The Arabic duwwar al shams - shams is sun and duwwar means something or someone who moves in a circular manner, so the translation literally means 'circler of the sun', like a planet.

Although the plant originated in South America, there were many cultures which found it useful before it was introduced to other areas. The sunflower became an important plant for Native Americans: the nutritious seeds were eaten, and the hulls of one particular variety gave a fabulous yellow dye. The Navajo made a tea with the leaves as a treatment for feverish pregnant women. A paste would be applied to warts to aid in their removal. Sunflower oil was utilised as a skin wash, thought to have anti-ageing and anti-oxidant properties, many moons before it became the best-selling marketable commodity that it is today.

Some countries use sunflower leaves for smoking. Sunflower buds can be added to salads. Sunflower petals can be crushed to make dyes, and the sunflower itself makes a beautiful cut flower, brightening up any room.

A high-quality animal feed can be manufactured from the 'press cake' which is a byproduct of the seeds, after the oil has been extracted. One farmer, Wolfgang Löser, uses 10% of his sunflower cultivation to make sunflower oil fuel which runs his diesel tractor.

Sunflower oil contains calcium and 11 other important minerals. As sunflower oil is low in saturated fats and high in unsaturated fats, it is beneficial for use in spreads, cooking, baking and frying. It has a cholesterol-lowering effect if used in place of more saturated fats like olive oil, providing cardiovascular benefits.

Sunflower seeds are edible, although you have to spit out the husk. A famous seed-nibbler was the character 'Fox Mulder' (David Duchovny) from the TV series The X-Files. The seeds are an ideal food for small rodent pets like hamsters and mice. A good crop of seeds are collectable in the autumn, which you can collect for planting next year. Sacrifice one flower by lopping off the whole head and hang it upside down from your bird table. Save some seeds to feed wild garden birds during the winter when their natural food is scarce, although do remember that if you start feeding your feathered visitors, you must continue to do so or they may starve.

If you put out sunflower seeds in Woronora, New South Wales, Australia, Sulphur-crested Cockatoos, Crimson Rosellas, Rainbow Lorikeets and King Parrots might be attracted, providing a colourful show for you in return for being fed.

An unfortunate by-product of the 20th Century is radioactive waste. Sunflowers are being used to mop up radionuclides after the world's worst environmental disaster6 at Chernobyl in 1986. The roots of the sunflower plants, on floating rafts, preferentially absorb caesium and strontium, removing some 95% of the radioactivity from poisoned water. Sunflowers also seem to be effective for absorbing mercury and lead - although chemicals, called chelating agents, must be added to dissolve the ions.

Ah, Sunflower, weary of time,
Who countest the steps of the Sun,
Seeking after that sweet golden clime
Where the traveller's journey is done.
Where the Youth pined away with desire,
And the pale Virgin shrouded in snow,
Arise from the their graves, and aspire
Where my Sunflower wishes to go.
- Ah, Sunflower by William Blake

The sunflower is mine in a way.
- Vincent van Gogh in a letter to his brother Theo

The famous Dutch artist Vincent van Gogh painted many pictures on the subject of sunflowers. One, painted in 1888 in Arles, southern France, has 14 blooms in a vase, and now hangs in the National Gallery in London. Due to the availability of pigments, van Gogh was able to apply the entire range of the yellow spectrum. Two other pictures with 15 blooms in various stages of their lives (from bud to withering) hang in the Van Gogh Museum, Amsterdam, Netherlands, and the Sompo Japan Museum of Art, Tokio, Japan. The Japanese-owned painting had been purchased at auction in March 1987 for a record-breaking $40m.

Many charities like WellBeing and local hospices choose the sunflower to represent them on collectable pin badges, raising much-needed funds.

No doubt there are many hostelries and establishments named after the sunflower. One such is the Sunflower Hotel which can be found just a few minutes walk from the picturesque Qawra Bugibba promenade in north Malta. Its Geranium Restaurant seats 150 persons, and there's an outdoor pool shaped like a club (♣) on a pack of cards.

[The Sunflower Galaxy is] reminiscent of showers of sparks thrown out by a rotating fiery pinwheel.
- Robert Burnham Jr (1931 - 93), author of Burnham's Celestial Handbook

The Sunflower Galaxy (M63) is an 8.1 magnitude spiral galaxy in the constellation of Canes Venaciti7, about 35 million light years away. When weather conditions are favourable, you should be able to detect it with a small telescope, five degrees north-northeast of Cor Caroli (Heart of Charles), the principal star of Canes Venaciti.

Bagels can be coated in sunflower seeds to make them even more delicious. Pan-fry the onions in sunflower oil while making Prune and Apple Stuffing Balls.

Like New Yorkers, sunflowers are tenacious, surviving and thriving in adverse conditions. Our wish is to see sunflowers, in the hands of people, become a new symbol of remembrance, honour and hope - through the creation of sunflower memorials that remember the lost, honour the living and hope for a real peace for all... this year and every year.
- Spokesperson for the Sunflower Project NYC speaking in 2006.

1Helianthus is another name for Apollo, the Greek and Roman god of medicine, healing, light, and truth; and as the leader of the Muses, a god of music, poetry and art.20, 1, 1, 2, 3, 5, 8, 13, 21, 34, 55, 89 etc.3The others are the yellow lily, red poppy, marigold, lavender, celandine, passion flower and heliotrope.4Seedlings appear within five days of germination.5Mount Sunflower is the highest point in Kansas, topping 4,039 feet.6The meltdown released ten times the amount of radiation into the atmosphere than the atomic bomb explosion at Hiroshima, Japan, 41 years earlier.7Introduced by Johannes Hevelius in 1690, it represents the two dogs Asterion and Chara, both held on a leash by Boötes. They apparently chase Ursa Major (the Great Bear) across the sky.