The Language of Flowers Content from the guide to life, the universe and everything 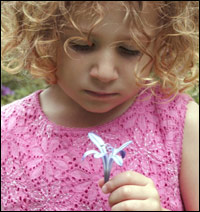 A flower is sensually stunning; the colours strike the optic nerve and the smell can penetrate the brain as if it is almost a taste. It is for this reason (among others) that plants, from herbs to flowers, have always been used as a signal for beauty or love, as stunning decoration or occasionally as a remedy for ailments. In Biblical times, flowers were used symbolically, with Jesus asking us all to consider the lily1. In Mediæval times they were seen as a source of magic. Under the reign of Queen Victoria, flowers - or more specifically plants of all kinds - took on a new meaning when their scent, even on a handkerchief, conveyed a message. In a time when standards restricted conversation, flowers dared to say what people couldn't and were seen everywhere, not just cut in bouquets but from men's lapels to stationery; and surprisingly the meanings were not always positive.

Due to the insanely long list of definitions for every flower, and often each subtle nuance of the flower, floriography dictionaries were published throughout this period; Le Langage des Fleurs2 by Charlotte de la Tour was the first to be published in 1818. During the reign of Queen Victoria many more were published, including the truly comprehensive meaning of 100 flowers in John Ingram's Flora Symbolica3 signifying the utter importance of floral etiquette - after all, how embarrassing would it be if you gave the object of your desires a yellow carnation, signifying rejection, and expected some loving in return. Thus it was very important that a couple shared the same dictionary as some editions contradicted each other, like the daffodil which could either mean 'unrequited love' or 'the sun shines with you' (or more realistically, the difference between your cheek receiving a slap or a kiss). So, if you're having trouble expressing your true feelings in an age of clichéd superlatives and exaggerated adoration why not go back to basics and say it with flowers?

Clearly flowers signify romance more than anything else and the epitome of this is a red rose. However, although this traditionally means I love you, if it's too dark a shade of red it can imply shame; if it is too light and is almost pink the message can actually mean a wish to keep the love secret, which might not produce the desired effect. A much simpler way of suggesting romance is with the festive mistletoe which always means a kiss, though that is by no means its limit if the recipient is game. The japonica flower is also a concise way of sending the message of a sincere love symbol, whereas a red or pink hyacinth carries the less certain meaning of playful joy. Victorians who were explicitly after some no-strings fun, as we may now put it, would opt for dill, which means nothing more than pure lust.

The tongue-twisting chrysanthemum offers love if red and truth if white, and the two colours can be mixed together for a hybrid message of true love. If a person is sure of true love of course, they could opt for something a lot more risqué and urgent with a spider flower, which is actually a request to elope. Someone less dynamic might chicken out and go for the warm sentiment of spearmint. A nice middle-ground for someone suffering the dilemma of how strong a message to send out would be a pansy which translates to 'you occupy my thoughts' despite its modern association with homosexual men. And sadly, floriography was all the rage when homosexuality was seen as wrong and evil, and though this is no longer generally the case, nobody seems to have thought of upgrading the plant which symbolizes homosexual love - currently the rather bland grass.

Despite being a symbol of beauty and emotion, flowers were also used by the Victorians to denote anger at each other and imply insults that were too racy to be articulated in respectable society. No doubt the aforementioned grass would have been used by some in that day and age to insinuate certain things about an enemy's masculinity. A more reserved way of angering someone may be to show them indifference with candytufts, but a more direct approach might be the use of garlic which would not only make the recipient stink, but would also infer that they were an evil force or an illness that needs warding off. As mentioned before, some dictionaries contradicted each other and so the hydrangea would normally mean heartlessness or frigidity but might be confused as gratitude for understanding an apology - certainly not the kind of message that would insult somebody in a feud.

Nothing could be clearer, though, than an orange lily which is pure and simple hatred. This could be spiced up with a yellow lily which has some positive meanings, such as gratitude and jubilation, but mixed with orange the message of falseness would be the obvious overtone. In certain cases, perhaps where somebody would want to deride an opponent's lack of luck with the opposite sex, the amaranthus flower (representing desertion) would be a very damming riposte, but only in certain cases; a more general approach might be using nuts which mean stupidity. Of course, any insult via flowers could be done ironically: mock-sympathy for heartache via yarrow, which is normally said to be a cure for matters of the heart. This method could be used to turn most positive plants around to a negative insult.

Everyone likes flowers. Well, mostly everyone. So why limit their use to communicating with either a loved one or a hateful enemy? A friend would be just as glad to receive some pretty and potent flowers. Whether it is a good luck message with the bells of Ireland or a bluebell/Canterbury bell of gratitude, any friend would be glad to receive some flowers, even merely a cattail to wish peace and prosperity. An edelweiss can also be sent to thank a friend for their courage, or merely show them that you respect their nobility, whereas someone who is struggling to be courageous might be helped along the way with a mixture of eremus and euphorbia, endurance and persistence respectively. A more simple gesture of platonic love would be the fraternal woodbine but something more emotional could be sage, to suggest a great respect and wisdom. A more aesthetically pleasing flower, though, that suggests fond memories shared in the past is periwinkle, which can be mixed with myrtle to heighten the effect.

Apart from their conventional meanings in the Victorian language of flowers, some plants are used as specific symbols. In Chinese culture, an azalea is the symbol of womanhood, while an orchid translates to many children. Many nationalities have a plant to represent their country; a famous one being the Tudor rose adopted by Henry VII in a bid to end the War of the Roses between the House of Lancaster and the House of York; he took the red rose of Lancaster and the white rose of York and mixed them together to create the English red and white rose which has always been connected with that country ever since. A lesser-known flower, on the other hand, is Hawaii's national plant, the simple hibiscus. Fortuitously, the sign of strength and courage, the borage plant, has been adopted by Cancer Research UK as the emblem of their struggle to fight the illness because it has been found to contain healing qualities; its meaning must have been just a lucky accident. The most odd definition given to a flower has to be that of the green rose; not that it could be used in many situations but it is still there if anybody should happen to send the message that they are from Mars.

1'Consider the lilies of the field, how they grow; they neither toil nor spin, yet I tell you, even Solomon in all his glory was not clothed like one of these.'
- Matthew 6:28-332The Language of Flowers.3Flower Symbols.