Mistletoe Content from the guide to life, the universe and everything 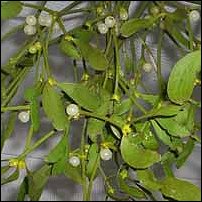 Mistletoe is best known for hanging from the ceiling at Christmas in the hope of catching a kiss underneath it, but there is a lot more to this plant.

Neither a shrub nor a tree, European Mistletoe (Latin name Viscum album1 which roughly translates as 'white goo') is an aerial parasite, or more correctly, a hemiparasite. It makes its own food by photosynthesis, and has been found growing on other mistletoe plants, but its usual home is on soft-barked, deciduous trees. Sending its roots down inside the tree, it takes its nutrients from the host. This can cause damage and deformities to the tree, but only rarely kills it. Without the host, the parasite cannot live. It forms bushes as it grows, up to five feet in diameter, and is most commonly found on apple trees. Contrary to popular belief, it is very seldom found on oak trees.

It has evergreen leathery leaves, and waxy, white berries that appear in December. The plant is spread by birds, most commonly mistle thrushes and black cap warblers, eating the berries, and then by either leaving 'deposits' on another tree branch, or wiping their beaks clean. The seeds are sticky, and so don't fall off the tree, and they sprout where they land. They germinate in six weeks, sending out a thread-like root which pierces the bark and roots itself in the growing wood. They flower after five years, with the male flowers on one plant, and the females on another. It cannot be cultivated in the earth, but a good trick is to rub squashed berries against the underside of a branch, into a nick in the bark if possible. It usually lives for eight to ten years, the tree declining in health all the time.

It is also an endangered species in the UK, so it shouldn't be harvested from the wild. A berry or two for propagation purposes will not harm it, but cutting sprigs off for the home is not wise. Where it is cultivated, mistletoe needs to be managed to prevent it damaging its host, so its a good idea to harvest it frugally during the Christmas period.

The name 'Mistletoe' comes from the 2nd-Century Anglo-Saxon word Mistletan - Mistel meaning dung, and tan meaning twig. It was believed at the time that the seed grew spontaneously from the birds, rather than from being simply passed through the bird. The Celts knew it as 'All-heal', due to their belief that it had miraculous healing properties.

Long associated with Christmas, one French tradition explains why mistletoe is poisonous. It was the tree that was used to make Christ's Cross, and so was cursed. Denied a place to live and grow on Earth, it became a parasite. In Brittany, it is known as Herbe de la Croix for this reason.

It was placed in or above cradles to prevent children being stolen by faeries and replaced with changelings. Not such a good idea, due to its poisonous nature.

In the 1st Century, it was believed that mistletoe could perform miracles. These miracles ranged from providing fertility for humans and animals to healing diseases and giving protection against witches. Branches were hung from ceilings to ward off evil spirits, and placed over house and stable doors to prevent witches entering.

Mistletoe was considered sacred by the Druids2 because it could occasionally be found growing on oak trees, a tree sacred to the Druids, and a symbol of strength and immortality. It was cut with a gold sickle, and caught on a white cloth to avoid touching the ground. This was normally carried out five days after the new moon following the Winter Solstice, and marked the beginning of the winter celebrations.

It was also used as part of their ritual sacrifices, as mistletoe pollen was found in the stomach of Lindow Man3, possibly in the form of a ritual drink.

The Norse explanation for the custom is a tale of Gods and Goddesses, betrayal and death.

The Norse god Balder was the best loved of all the gods. His mother was Frigga, goddess of love and beauty. She loved her son so much that she wanted to make sure no harm would come to him. When he dreamt of his own death she went through the world, securing promises from everything that sprang from the four elements - fire, water, air, and earth - that they would not harm her beloved Balder.

Leave it to Loki, a sly, evil spirit, god of mischief, to find the loophole. The loophole was mistletoe. He made an arrow from its wood. To make the prank even nastier, he took the arrow to Hoder, Balder's brother, who was blind. Guiding Holder's hand, Loki directed the arrow at Balder's heart, and he fell dead.

Frigga's tears became the mistletoe's white berries. Balder is restored to life, and Frigga is so grateful that she reverses the reputation of the offending plant - making it a symbol of love and promising to bestow a kiss upon anyone who passes under it.

1Phoradendron flavescens is the type native to North America.2Most information about the Druids comes from Roman records, because they kept none of their own.3The 'body in the bog', a man murdered in Roman Britain, found preserved in the peat bog of Lindow Moss.4Traditionally this was done by a man, but this Researcher is not willing to assume that all couples will be male/female.