The Passion Flower Content from the guide to life, the universe and everything 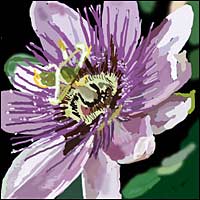 Several thousand miles is a long way from home. In fact, when you are in a very strange country without healthcare, regular food supplies or even somebody who shares your spiritual beliefs, it is a very long way from home indeed. If you are a very religious person, your faith would serve as a comfort under such privations, and any symbol of it you might come across in the new world around you might go some way to convincing you that it was not such a bad place after all.

So it was for the Jesuit missionaries of the 17th Century. They intended to spread the Catholic religion as far as the boundaries of the world would allow, and followed in the wake of the (then) all-conquering Spanish empire. As is well known, they fetched up in South America. This indeed was an alien world, full of totally unexpected animals and plants. Yet it was all, as they saw it, part of God's bountiful creation.

No more so was God's handiwork manifest than in one plant in particular. The passion flower is so called because it symbolised Christ's suffering on the cross. Passion flowers are climbing vines, probably distant relatives of the cucumber. They use tendrils to scramble up other plants, through the rainforest canopy and towards the light. Pretty unremarkable stuff, so far; there are countless examples of climbing plants. The flower, however, is a thing of unique and undisputed beauty, regardless of the provenance of its design.

The typical passion flower has five sepals1 and five petals, which are almost identical to the sepals. Immediately inside these is a structure with a shape found in no other flower. This corona is formed of two stacked rings of very fine filaments, often brightly coloured like the sepals and petals. Protruding from the centre of the corona is a small post, upon which rests the ovaries, five stamens2 and anthers3, and three stigmas4.

This is where the symbolism gets a little florid (if you'll pardon the expression). Unusually for such a story it has a well-documented and undisputed origin. Jacomo Bosio, a scholar, lived in Rome in 1609. He was working on a treatise upon the crucifixion when an Augustinian friar of Mexican birth showed him drawings of a remarkable flower. After much prevarication (and a rather liberal interpretation of the facts) he agreed to include the drawings of the flower in his book. The symbols of the Passion of Christ were many and varied. The unique corona represented the crown of thorns. The ten sepals and petals represented the Apostles (except Judas and Peter, who both distanced themselves from Christ prior to the crucifixion). The five anthers were the five wounds on Christ's body, and the three stigmas the nails. The leaves were the spear that pierced His side, and the tendrils the scourges that flayed His flesh. No doubt there were other symbols to be found, if one could be bothered to look for them.

But the fact remains that the passion flower is indeed an exquisitely beautiful plant. Moreover, counting the numbers of the components in the flower gives a striking example of how the Fibonacci numbers govern so much of plant growth and symmetry. Threes and fives are self-evident, but closer inspection reveals more subtle resonances. This Researcher counted 555 filaments to a corona ring on average, not the 72 thorns that the Jesuits held to be present in the crown. If God's handiwork is present in the passion flower, then it is indirectly expressed using the language of numbers.

Passion flowers are quite easy to grow, even in temperate climates6. You can grow your own passion vines cheaply and easily by getting your seed from the supermarket rather than a specialist supplier.

The easiest to grow is Passiflora caerulea; it is also the hardiest and the one most likely to survive outdoors. The name caerulea means 'sky blue', but this isn't exactly true; only the tips of the corona are blue, the rest of it being banded white and maroon, except for the greenish-white sepals and petals. It also has an exquisitely beautiful pure-white variety called 'Constance Elliot': an attractive name for an attractive plant. Being a climber, it will scramble through any large shrub or tree, and even make Cupressa x leylandii look attractive7. Passiflora actinia is another frost-hardy species, although much harder to get hold of, whether as a fully grown plant or seeds.

The easiest way to propagate passion flowers is by planting seeds in spring. Pre-soak them for a couple of days then sow them in some compost with bottom heat, and prick them out into three-inch pots. If you are growing a less-than-hardy variety then you can train them around a wire hoop in a larger pot and grow them either in a conservatory or on a sunny windowsill. They like plenty of direct sunshine and will thrive against a south-facing wall, even in a container. Take care when transplanting as the roots are very brittle.

One of the more curious features of the plant is the presence of numerous nectaries8 on the edges of the leaves. Grow a passion flower in sufficiently warm and humid conditions, and the nectaries will attract ants. One might be tempted to regard these as a pest, especially in the greenhouse, but they are anything but. In the wilds and rainforests of South America, the ants tend to be a lot larger and more vicious than the common-or-garden variety, and quickly despatch any other predatory insects, such as caterpillars of the butterfly genus Heliconius. These striking insects live almost exclusively on passion flowers and one will often see the plants cultivated for this purpose in butterfly sanctuaries.

Passiflora caerulea, like most passion flowers, is a rampant climber and will probably outstay its welcome unless dealt with brutally, either with secateurs or a good hard frost. Another worth considering is P. incarnata, which has even more beautiful and fragrant lavender flowers. It is a native of the US and can be seen scrambling through bushes by the roadside in many of the Southern States, such as Florida and Texas. It is more tender than the other varieties mentioned and needs a cool greenhouse in order to thrive in temperate countries. However, it will survive a frost and so might be worth a try outside in milder areas of the UK.

One species of passion flower yields the edible passion fruit we see on European supermarket shelves: P. edulis, a mild yellow form with a spongey husk, sometimes as described as a 'granadilla', is occasionally available, although the most common form is a wrinkled, prune-like fruit with a thin, tough husk. A much rarer variety is the 'giant granadilla', P. quadrangularis, which has huge, spectacular blooms and much larger fruit.

Passion fruit are grown throughout the warmer latitudes: Brazil has had a thriving commerical industry for many years, but South Africa, Kenya, Australia, New Zealand, India, Israel, Hawaii and New Guinea all grow them commercially. Interestingly, plantations of this plant are provided with hollow wooden logs so that the pollinating insect, the carpenter bee, can have a cosy home to go to after a hard day's work.

Other notable passion fruit include:

These are beautiful, easy and rewarding plants, allowing for their need for warmth. There are also several hundred species to choose from, so one could spend one's entire horticultural life experimenting with growing new species from seed and not get bored. Whatever species you decide upon, the growing experience tends to be akin to lighting the blue touch paper and standing well back, so vigorous is the plant. Easy cultivation, exquisite and exotic flowers, as much religious symbolism as the Da Vinci Code and dessert into the bargain - of how many other garden plants could that be said?

1These form the outside of the closed bud and spread out behind the petals when the flower opens.2Stalks for anthers.3Pollen producers.4Pollen receptors.5This is a Fibonacci number, along with 3, 5, 8, 13, 21, and 34.6This Researcher has one blooming outside his window, even into autumn.7And might, with any luck, throttle it to death.8The bits that produce the nectar.