Helen Keller Content from the guide to life, the universe and everything 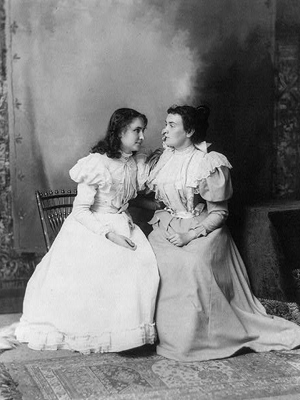 The public must learn that the blind man is neither genius nor a freak nor an idiot. He has a mind that can be educated, a hand which can be trained, ambitions which it is right for him to strive to realise, and it is the duty of the public to help him make the best of himself so that he can win light through work.

Helen Keller was an American woman who became deaf and blind as a child. She overcame these disabilities and taught people that having disabilities doesn't mean it is impossible to communicate with the world. Helen Adams Keller was born in Tuscumbia, Alabama, America, on 27 June, 1880, to Captain Arthur Henley Keller and Kate Adams Keller. Her father had served in the Confederate Army during the American Civil War and at the time of Helen's birth was a cotton plantation owner and the editor of a weekly local newspaper, the North Alabamian. Her mother worked alongside Helen's father on the plantation. Together, the family resided in a small house, Ivy Green, that Helen's grandparents had built in 1820.

In February, 1882, Helen fell ill 'with acute congestion of the stomach and brain'. At the time of diagnosis doctors called the illness 'brain fever', and it is unclear until today whether it was either of what are now known as scarlet fever and meningitis. As a result of this mysterious illness, Helen became deaf and blind. Due to the fact that she could not see or hear the world around her, she found it difficult to relate to her environment and therefore acted unruly and wild.

When Helen was six, her parents took her to see Dr Alexander Graham Bell1, who had invented the telephone and now specialised in educating the deaf and blind. Bell told Helen's father about the Perkins Institution and Massachusetts Asylum for the Blind, and how the institution had helped a young deaf-blind lady by the name of Laura Bridgman to read under the supervision of one of their pupils, Samuel Howe. Helen's father contacted the director of the institute, Michael Anagnos, who helped them in their pursuit for a teacher.

My hand is to me what your hearing and sight together are to you...it is the hand that binds me to the world of men and women.
- Helen Keller

On 3 March, 1887, Helen was united with a young teacher called Anne Sullivan Macy2 who came to live with Helen's family in their home in Tuscumbia. A description of Anne's first glimpse of Helen appears in The New York Times. 'Helen, her brown hair tumbled, her pinafore soiled, her black shoes tied with white string, jerked Miss Sullivan's bag away from her, rummaged in it for candy and, finding none, flew into a rage'. To which Anne added:

She has a fine head, and it is set on her shoulders just right. Her face is hard to describe. It is intelligent, but it lacks mobility, or soul, or something. Her mouth is large and finely shaped. You can see at a glance that she is blind. One eye is larger than the other and protrudes noticeably. She rarely smiles.

Anne taught Helen how to spell out words such as 'doll' and 'cake' by using her fingertips. Helen loved learning and was even able to copy the finger movements.

Despite the fact that Helen was beginning to understand the world around her and integrate with it, she was still prone to acting like a rebel, as her parents had not disciplined her. She grabbed at food on the table and even fought with her teacher, but once Helen and Anne had moved to a small cottage on the Keller's property, away from distractions and the rest of the family, her behaviour started to improve.

Although Helen was able to spell out the words Anne gave to her, it wasn't until the day that she was taught about water that she fully understood the meaning of spelling words.

We walked down the path to the well-house, attracted by the fragrance of the honeysuckle with which it was covered. Someone was drawing water and my teacher placed my hand under the spout. As the cool stream gushed over one hand she spelled into the other the word water, first slowly, then rapidly. I stood still, my whole attention fixed upon the motions of her fingers. Suddenly I felt a misty consciousness as of something forgotten, a thrill of returning thought, and somehow the mystery of language was revealed to me.
- Helen Keller

After that she asked Anne her name. Anne spelled out the word 'teacher', and from that day on Helen knew Anne as 'teacher'. By August, Helen knew 625 words and had also started to learn to write, read Braille, learn the manual alphabet, and use both sets of typewriter.

Meanwhile, news of how a deaf and blind child called Helen Keller had learned to interact with the world around her was being passed throughout the country. Many famous people wanted to meet her, even President Grover Cleveland. Helen wanted to visit Dr Bell3 and Anagnos, who had helped her. In May, 1888 she visited the Perkins Institute where she continued to be taught by Anne. There, she met other girls that communicated with her through finger-spelling.

I joined the little blind children in their work and play, and talked continually. I was delighted to find that nearly all of my new friends could spell with their fingers. Oh, what happiness! To talk freely with other children! To feel at home in the great world!
Helen Keller

For Anagnos's birthday in November, 1891, Helen sent him a story entitled The Frost King. Believing it to be all Helen's work, Anagnos had it published, but when he found out that it had been copied from a story previously read to her, he cut contact with both Helen and Anne.

In October, 1894, Helen and Anne travelled to New York City to attend the Wright-Humason School for the Deaf, where Helen was taught to understand what somebody was saying by touching the lips and the throat. The teacher also tried to get Helen to talk, but because Helen's vocal chords had not been trained she failed to speak.

In October, 1896, Helen became the only student who was deaf and blind at Cambridge School for Young Ladies. There she learnt French, Latin and German, as well as maths. Helen would learn these subjects through Anne, who first read the information and then translated it into finger spelling, so that Helen could understand and respond accordingly. Towards the end of her education at the school she took examinations that led to her being offered a place at Radcliffe College in 1899. Helen accepted the offer and continued her education there. It was also at college that she wrote her first book, a biography, entitled The Story of My Life. It was edited by John Albert Macy, published in March, 1903, and dedicated to Dr Bell. The book gained great reviews and fellow author Mark Twain felt obliged to write a letter of congratulations to her. During her lifetime, Helen wrote fourteen books and many other pieces of literature. She wrote books on animals, on equal opportunities for women, and even wrote about a Swedish scientist and philosopher called Swedenborg (1688 - 1772).

On 3 May, 1905, John Macy married Anne and together they lived with Helen in Wrentham, Massachusetts, until the marriage broke up in 1913. During this time, John inspired Helen to carry on writing and become acquainted with the work of socialist authors Henry David Thoreau, William James, HG Wells and Karl Marx. This led her to become a member of the Socialist Party of Massachusetts, a suffragist in 1909, and to write two books that reflected socialism: The World I Live In and Out of the Dark4. Helen also joined the American Civil Liberties Union and became a pacifist, which resulted in her opposing the First World War.

Helen and Anne also toured the world, giving public speeches to anyone who would listen. They earned a good living out of doing this for a while, and even recruited a secretary called Polly Thomson in 1914. In 1918, the 'Three Musketeers' as they called themselves, travelled to Hollywood. There, they made a film about Helen's life, called Deliverance, which, when released, failed to do well in the US. After this, Helen took to doing Vaudeville stage performances about how she first began to understand the meaning of words. These performances were followed by question-and-answer sessions. One reviewer at the time wrote:

Helen Keller has conquered again, and the Monday afternoon audience at the Palace, one of the most critical and cynical in the World, was hers.

In 1921, Helen's mother died, and Anne became ill with bronchitis, making it impossible to carry on touring with Helen. Polly took over accompanying Helen on tours, including one which was funded by the American Foundation for the Overseas Blind (now called Helen Keller Worldwide). The tour enabled Helen and Polly to visit soldiers maimed in the war, and offer support. Helen became ambassador for the American Foundation of the Blind (AFB), and helped create new programmes for the deaf and blind so they could integrate into society. Anne died on 20 October, 1936, and from then on Helen and Polly lived at Arcan Ridge, in Westport, Connecticut, America. Another tour took place after World War II, and it was during this tour that a fire burnt down their home Arcan Ridge, and with it a piece of work Helen had written, entitled 'Teacher'.

Polly died on 21 March, 1960, leaving Helen in the hands of nurse Winnie Corbally, who had looked after Polly. That same year Helen's health also started to deteriorate. In 1962 a film called 'The Miracle Worker' was released revealing to the world the story of Helen Keller's life with Anne Sullivan, and not long after that Helen was awarded the Presidential Medal of Freedom by Lyndon Johnson.

Helen died at the age of eighty-seven on 1 June, 1968 at her house, Arcan Ridge. Helen was cremated in Bridgeport, Connecticut and her funeral took place at the National Cathedral in Washington DC where her ashes were scattered close to those of Anne and Polly. At Helen's funeral Senator Lister Hill announced:

She will live on, one of the few, immortal names not born to die. Her spirit will endure as long as man can read and stories can be told of the woman who showed the world there are no boundaries to courage and faith.

A bronze plaque shows where she was laid to rest and written in Braille are the words: 'Helen Keller and her beloved companion Anne Sullivan Macy are interred in the columbarium behind this chapel'.

1Dr Bell's wife Mabel was deaf.2Anne Sullivan herself had been nearly blind from the age of five, and had studied and graduated at the same institute.3 Dr Bell set up the Volta Bureau for the Deaf (which is now known as the Alexander Graham Bell Association for the Deaf) in 1888.4Helen's book Out of the Dark was burnt under the Nazi regime in Germany due to its socialist content.