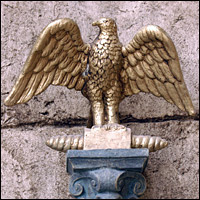 The golden eagle, Aquila Chrysaetos, is a member of the eagle family known as Accipitridae. Golden eagles can be found throughout much of the northern hemisphere, although its numbers are decreasing in some countries.

This magnificent bird lives in mountainous areas and places where the surrounding terrain creates abundant updrafts. This is essential in aiding the eagle to soar for long periods when hunting for food. They tend to avoid forested areas as the tree cover is a barrier to their hunting and catching of prey.

They are phenomenal hunting birds and will eat a wide range of food including foxes, cats and rabbits, and other birds like crows, pheasants and meadowlarks. Although it catches its food alive, the golden eagle will also scavenge from carrion, and this usually occurs if live prey is scarce in winter months or when extra food is required for chick rearing. Golden eagles can and have been reported to prey on animals weighing up to 100lb - they are birds of prey that know no fear.

Golden eagles can normally be seen riding thermals created by the cliffs they frequent, or flapping their wings lazily. While their normal flight speed averages at 30mph (around 50kph), they can achieve speeds of 80mph (approx 130kph). Until the white-tailed sea eagle was reintroduced to the UK in 1975, the golden eagle was the largest avian predator in the UK.

Adult eagles are brown with a golden buff head and neck, which gave them their name. Note, however, that the buff is only visible when fairly close to the bird. The golden eagle is a 'booted' species in that its feathers extend along its legs down to the talons, unlike normal birds whose legs are generally devoid of cover. Chicks and young eagles up to four years old have white banding on the tail and white flecks on the body; these disappear as they mature.

These birds are a truly wonderful sight when seen soaring and feeding. They can grow up to three feet in length, (.92m), can weigh in excess of 15 pounds (7kg) and have a wingspan of over seven feet (2m). The average lifespan of the golden eagle is between 15 and 20 years.

Once paired with a mate, the golden eagle will stay with the same partner for life. Nesting places are usually found on mountain ledges or cliffs at heights in excess of 2,000 feet, but can also include trees. An eagle's nest is known as an eyrie and, once it is established, a pair will use the same nest every year.

The female usually lays one to three eggs, with the incubation period normally lasting between 40 and 45 days. The male does some of the 'sitting' on the eggs but when they hatch the female stays with the chicks, known as eaglets, while the male does the hunting, providing food for the chicks and their mother.

Prevalence in the British Isles

In the UK the golden eagle is a protected species, and any poaching of eggs or interference with their nesting sites is a serious criminal offence. When an eyrie is known to have eggs it is not unusual for volunteers to mount a round-the-clock watch to prevent such attacks.

In Scotland, UK, there are around 500 breeding pairs in the central and northern highlands, in and around the Cairngorms and more isolated northern areas. There is only one known breeding pair in England, at Haweswater in the Lake District.

There are no golden eagles in Wales, although they have been introduced to remote areas of Northern Ireland over the last few years.

Although the species is not endangered, their numbers are statistically low. Consequentially, most countries where the golden eagle is found have local or national laws that protect these birds.

After years of extensive studies, scientists have divided eagles into four specific groups. Based on their physical characteristics and behaviour these groups are officially listed as:

The golden eagle falls into the booted or true eagles category.

In the United States, golden eagles are a protected species where the possession, hunting of, or having any body part of an eagle is a felony which carries heavy penalties.

The name Aquila chrysaetos is from the Latin aquila meaning eagle. The words chrysos and aetos are of Greek origin meaning golden and eagle respectively.

The golden eagle is the national symbol of Mexico and is seen on the flag and state buildings as well as all official government paperwork and books.

The golden eagle was almost adopted as the national symbol of the US but it was the 'cousin', the bald eagle, that was used in the end.

If you want to see grace, power and beauty in motion then there is nothing better than watching a golden eagle soaring across an open valley, or in the mountains feeding on the wing. It is truly one of nature's most beautiful birds.