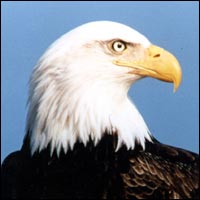 The American bald eagle, or Haliaeetus leucocephalus, is a member of the eagle family from what is known as the Sea and Fish Eagle group. The bald eagle can be found throughout the whole of the United States of America, primarily in the Gulf States from Texas and California across to Florida and South Carolina.

The bald eagle, both male and female, has a distinctive white head, neck and tail with a yellow beak and feet. The body feathers are a dark brown, nearly black. Young eagles, called eaglets, have a mixture of brown and white all over with a black beak. Adult plumage doesn't develop fully until the eagle reaches sexual maturity usually at around five years old. That's when the beak changes to bright yellow and the feathers become the normal dark brown colour. The head, neck and tail also turn fully white at this age.

As the bald eagle's diet is mainly fish they live by the coast and by major lakes and rivers. They will eat carrion, and have been seen to catch small birds and small mammals occasionally, usually in areas where their normal food source in lakes or non-flowing waters is frozen or dried out.

As with the golden eagle, once a bald eagle has paired up then they stay together for life. They use the same nests which are usually in high hardwood trees. The nests can measure up to five feet across and made out of sticks, twigs and mud.

The female normally lays between one and three eggs and the incubation is shared by both the male and female. The incubation period is usually around 35 days.

Scientists have, after years of extensive studies, divided eagles into four specific groups. Based on their physical characteristics and behaviour these groups were officially listed as:

Two of the best-known species of eagles are the golden eagle, from the Booted or True Eagles group and the bald eagle from the Sea or Fish group.

It was on 20 June, 1782, that the bald eagle was chosen as the USA's national emblem. The choice was made in the belief at the time that the bald eagle only existed in the USA. The fact the bird had great strength and character as well as majestic looks also fitted in with the American ideal of freedom and individuality. Added to which, the golden eagle had already been chosen as a national symbol by Mexico.

It was the eagle's white head that gave rise to its name, as bald meant white in the early 1700s and also at a distance, against the backdrop of the sky, the bird did indeed look bald.

On the 28th June 2007 the United States Interior Department took the bald eagle off its endangered species list. Since becoming a protected species, its numbers have grown successfully in the wild as it is no longer persecuted or hunted by man. It is estimated that there are some 9,700 breeding pairs throughout the United States.

Although taken off the endangered list the bald eagle is still a protected species in America and hunting them, stealing their eggs or otherwise interfering with them is a serious federal offence that carries severe penalties of big fines or imprisonment or both.

Bald eagles are found outside the USA only in zoos or conservation centres. In the UK they can be seen and watched in action at the Hawk Conservancy near Weyhill in Hampshire.