Hampshire, England, UK Content from the guide to life, the universe and everything 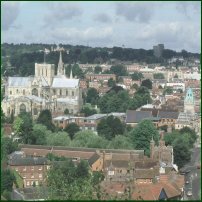 Many will pass through Hampshire without stopping - perhaps driving on the A303 or M27 to the West Country, or on the A3 or M3 en route to the ferry ports. It's not a county you might strongly associate with tourism - it has no sandy beach resort1 for example - yet it is an area of contrasts, with some fascinating places to be discovered by the curious traveller.

The name is modern. The county has only officially been Hampshire since 1959, prior to which it was known as the County of Southampton or Southamptonshire. The name is often abbreviated as Hants.

Being centrally-located on the south coast of England, it doesn't easily fall into the category of West Country, nor does it belong to the South East. Its neighbours, Dorset to the west and West Sussex to the east, are far easier to categorise in this respect.

Its East-West affiliation was far better defined when it formed part of the ancient Saxon kingdom of Wessex. The county town of Winchester was King Alfred's capital, and the Saxon and early Norman kings held court here as well as in London.

Looking further back, we know that Hampshire has been inhabited since Mesolithic times. There are Bronze Age farmsteads at Quarley, near Andover, and an Iron Age hill fort at Danebury, near Stockbridge. The Butser Ancient Farm project, near Chalton, has recreated an Iron Age farmstead, and conducts research into the farming methods of the Iron Age and Roman periods.

After Belgic tribes invaded in around 100 BC, the region was the territory of the Atrebates, whose capital was at Calleva, aka. Silchester. Vespasian's 2nd Legion then took the region for the Romans, building a town alongside Calleva. This town's grid system is clearly visible in the Silchester excavations. The Romans also built a massive shore fort at Portchester, where the original walls still stand today.

The Saxon conquest of the region began in 495 AD when the warrior Cerdic landed on the west side of Southampton Water. Jutes also invaded the Meon Valley, driving the British north west by 552 AD.

When power struggles ensued between the three Anglo Saxon kingdoms of Northumbria, Mercia and Wessex, Mercians briefly held the region until the accession of Egbert, who eventually became Saxon overlord of Britain.

West Saxon kings Ethelred I and Alfred the Great repelled Danish attacks and established the region at the centre of the Saxon kingdom.

The New Forest was a favourite hunting ground for Norman kings; William the Conqueror's son and successor William Rufus was killed there in a suspicious hunting accident. The abundance of oak woodlands led to a shipbuilding industry and the growth of the ports of Southampton and Portsmouth. In the centuries since, the coast has been heavily fortified to protect these strategic harbours.

For the record, Hampshire is bordered, clockwise from the west, by the counties of Dorset, Wiltshire, Berkshire, Surrey and West Sussex - and the Solent, the busy strait which separates Britain's mainland from the Isle of Wight. It is the third-largest English non-metropolitan county by population2.

The landscape is characterised by gently rolling hills with both arable and dairy farming. Weyhill, near Andover is the site of an ancient sheep fair, the largest in the country for many centuries. Hampshire Downs sheep are a popular breed, and locals are often known as 'Hampshire Hogs', supposedly deriving from the term 'hogget' for a young sheep.

Large tracts of land have been requisitioned for military training, particularly around Aldershot, Bordon and Andover.

Hampshire has portions of two National Parks: the New Forest and the western end of the South Downs3.

There are a number of AONBs4, including East Hampshire, the South Hampshire Coast5, and the southern part of the North Wessex Downs, which includes Watership Down, the setting for Richard Adams's eponymous leporine best-seller.

Employment rates are generally high compared with other counties. In the 1960s and 1970s, Winchester boasted the lowest unemployment rate in the UK. Many are employed across the county in MOD8 establishments and with defence contractors like BAE Systems.

Southampton is the UK's leading vehicle-handling and container port, as well as the UK's principal cruise port. Transit vans roll off the production line at the Ford plant in Southampton, and light shipbuilding takes place along the coast.

Incongruously situated on the edge of the New Forest is Esso's Fawley oil refinery, while a BP oil storage and distribution facility blots the landscape at Hamble.

The IT services companies IBM and CSC have their UK headquarters in the county. IBM's striking North Harbour office is one of Portsmouth's landmarks, and has provided a filming location for Doctor Who on more than one occasion.

Finally, the most successful money-making business has to be the De La Rue plant at Overton, which produces the paper for the Royal Mint's banknotes.

Defence of the Realm

You're never far from the British armed forces in Hampshire. The British Army garrison at Aldershot is the headquarters of the 4th Division, as well as hosting a number of other units including the 1st Battalion The Royal Welch Fusiliers, the 1st Batallion Coldstream Guards and 101 Logistics Brigade. Further south at Bordon is the Army's School of Electrical and Mechanical Engineers. Further units, including the Army Air Corps at Andover, are based in the north-west of the county, close to the major training area on Salisbury Plain.

The naval base at Portsmouth is home to almost two-thirds of the Royal Navy's surface ships, including the three aircraft carriers, Type 42 destroyers, Type 23 frigates and two mine countermeasure squadrons, as well as fishery protection and training units. Many facilities are based on the Gosport side of the harbour, including the prominent SETT Tower, the 100ft-deep submarine escape training tank.

The Royal Air Force has a smaller presence, although the heavy lift Chinook helicopters operate out of RAF Odiham, and military satellite communications are controlled from RAF Oakhanger, near Bordon.

The former Royal Aircraft Establishment base at Farnborough is now an aerospace technology park, and the airport operates light commercial flights. It is also the home of the Air Accidents Investigation Branch and the British National Space Centre.

Southampton has historic links to aviation through the Supermarine factory at Woolston. Originally set up to produce seaplanes in the early part of the 20th Century, it went on to design and build the Spitfire fighter, which played a pivotal role in the Battle of Britain. The factory was not surprisingly targeted by the Luftwaffe throughout World War II.

Hampshire has a number of further education colleges, and two popular universities:

It is often possible to discover a little more about a location by looking at the history of some of the local pubs9. Hampshire is no exception, and here are a few tasters for the thirsty traveller:

Two of the UK's best-loved authors have Hampshire connections. Novelist Jane Austen's house at Chawton has been preserved as a museum, as has Charles Dickens's birthplace at Portsmouth.

Comedian10 Benny Hill lived in Southampton and is now buried in Hollybrook Cemetery. Other famous graves in the county include those of Florence Nightingale at East Wellow, actor Alec Guinness at Petersfield, and aviation pioneer Thomas Sopwith at Little Somborne. Jane Austen and King Alfred are buried at Winchester11.

Benefiting from one of the warmest climates in the UK, Hampshire is naturally popular with gardeners. Three back yards worthy of mention are Alan Titchmarsh's TV garden Barleywood12, near Alton; Exbury Gardens in the New Forest; and Mottisfont Abbey Garden, near Romsey, with its national collection of old-fashioned roses.

Something in the climate must have attracted some of the rich and famous to set up their homes in the county. Notable piles include:

As well as the Motor Museum, other family fun days out in the county include:

Equally fascinating, but at a slightly slower pace are:

And finally, you might like to visit one of the regular events hosted by the county. Three well-known ones are:

Southampton Airport at Eastleigh has flights to many UK and European destinations.

1Apart from a little sand on Hayling Island, which in any case fails the 'resort' criterion.2Population 1,253,300 excluding the unitary authorities of Portsmouth and Southampton - Office for National Statistics, 2004.3The South Downs National Park is in the process of being designated.4Designated Areas of Outstanding Natural Beauty.5An interesting choice of name, as Hampshire only has a south coast.6The 274ft Fanum House in Basing View, formerly the headquarters of the Automobile Association (the AA).7Indices of Deprivation survey, 2004.8Ministry of Defence.9Well, that's this researcher's excuse.10And one-time Eastleigh milkman.11At the cathedral and at Hyde Abbey respectively.12Barleywood is not open to the public13Although younger children may not appreciate their diet of quartered rabbits.14The aforementioned eagles are released from Thruxton airfield and can be watched as they gracefully soar back along the valley to the centre. Aircraft movements are temporarily halted, and when the birds reach their destination the airfield is notified with the code message 'The eagles have landed'.15Or at least, a 14th Century representation of it. The original is not known to exist.16Of 'I am just going outside and may be some time' fame.17That's ships, not sailors.