The New Forest, Hampshire, UK Content from the guide to life, the universe and everything 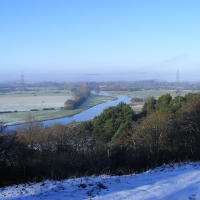 The New Forest is a large national park in Hampshire, in the south of England, UK. Despite its name, the New Forest is neither new nor a forest. It is 900 years old and less than half of it is actually woodland.

The park consists of a mixture of native deciduous woodland, coniferous forestry, heaths, bogs, streams and estuaries. Ponies, cattle and pigs are allowed to roam freely, but are privately owned and grazed under an ancient system or grazing rights, under the control of verderers1.

Popular coastal resorts Bournemouth, Christchurch, Highcliffe, Milford-on-Sea and Lymington can be found to the south of the New Forest. Salisbury is to the north and Southampton to the east.

History of the New Forest

The New Forest was set aside 900 years ago by William the Conqueror as a vast hunting ground for royalty. His son, King William Rufus (William II), was killed in 1100 by a stray arrow fired by Walter Tyrell while hunting in the forest. It has never been determined whether it really was an accident or if he was murdered. In 1745 a stone (the Rufus Stone) was erected near the village of Minstead to mark the spot. The inscription reads:

Here stood the oak tree on which an arrow shot by Sir Walter Tyrrell at a stag glanced and struck King William II surnamed Rufus on the breast of which stroke he instantly died on the second day of August anno 1100. King William thus slain was laid on a cart belonging to one Purkess and drawn from hence to Winchester, and buried in the Cathedral Church of that City

Apart from hunting, another important use of the forest was to provide wood for shipbuilding. Around the time of the 17th Century, the Royal Navy built many galleons from New Forest timber.

The New Forest used to contain a huge and fascinating variety of wildlife. With the progress of man and our deforestation of the area, little remains. Among others, wild boar were hunted to extinction, and red squirrels were driven out by the continental grey squirrels. Wild deer still roam, but the most famous mammal still resident in the New Forest is the New Forest Pony. These are no longer wild; they are very tame and are now quite familiar with the hordes of tourists.

Travelling around in the New Forest

The New Forest is ideal for casual rambling. There are many paths, mostly very easy going and with beautiful scenery.

There are several national trails and recreational paths around the New Forest. The Avon Valley path is just outside the park to the west, following the River Avon down to Christchurch. The Solent Way follows the coastline from Milford-on-Sea to Hythe; from here you can catch a ferry across and continue the Solent Way or follow the Itchen Way north.

Cycling in the New Forest is a pleasant experience but a limited one. There are virtually no official bridleways (which allow both cycles and horses) and so the cyclist has to stick to the roads, which are very busy in the summer, and to gravelled tracks, which are difficult to cycle on. Having said that, it is still a very nice place to cycle in, but after a few days you will have exhausted the possibilities.

If you do not own your own bicycle, you can hire them from Lymington, Lyndhurst, Brockenhurst, Burley, New Milton and Ringwood.

There are plenty of roads in the New Forest, in fact too many roads. Parking places are frequent due to the massive tourist trade. The main roads - the A35 and the A337, and the A31 dual carriageway - cut through the heart of the New Forest. However, the New Forest is a mandatory 40mph zone.

There are stations at Ashurst, Beaulieu Road, Brockenhurst and Sway, which provide excellent access to the east and south parts of the New Forest.

The New Forest is a fantastic place for horse riding. The possibilities are far greater than cycling. As there are so many wild ponies anyway, the authorities don't mind extra horses wandering around the paths. There are excellent facilities for both beginners and experienced riders.

If you are tired of trees remember that the New Forest is very close to the sea. There are good beaches at Calshot, Lepe, Milford-on-Sea, Highcliffe and Barton-on-Sea. Bournemouth is a popular tourist destination and seaside resort.

You can swim on the beaches mentioned above, and also in the open air sea water swimming pool at Lymington. There are indoor pools at Applemore, New Milton, Lymington, Totton and Ringwood.

Although the south coast isn't particularly suited to surfing, it is ideal for wind surfing. Try Calshot, Lepe and Mudeford Quay. In the summer, windsurfing competitions are held near Southampton.

There are plenty of tourist cruises in the summer. A popular choice is to go on the Beaulieu River from Buckler's Hard.

There are ferries between Keyhaven and Hurst Castle, and to Southampton from Hythe. A trip to the Isle of Wight is an excellent idea; go from Lymington or Keyhaven.

The Solent and the Isle of Wight are world-famous sailing areas. Yachting harbours, launching points and moorings can be found at Lymington and Keyhaven. There are also launching slips at Lepe and Calshot.

During the summer there are various racing and other sailing events at Lymington and Keyhaven. And of course the famous Cowes Week is held on the Isle of Wight. Also, the famous Tall Ships Race starts from Southampton.

There is a good range of golf courses around. There is a coastal course at Barton-on-Sea. There is a more public golf centre at Dibden with 9 and 18 hole courses, and a floodlit driving range overlooking Southampton Water; and in the New Forest itself there are courses at Bramshaw, Brockenhurst, Burley and Lyndhurst.

The Activity Centre at Calshot offers, among other facilities, a dry ski slope.

The River Avon is a beautiful spot for fishing, and is famous for salmon and coarse fishing. Fishing permits are mandatory, but can be obtained locally.

There are several forest lakes and ponds which offer permits from the site manager. The lakes at Fordingbridge offer trout fishing.

The Lymington River estuary and the Solent offer good sea fishing from beaches or small boats.

There is only one Youth Hostel in the New Forest, at Burley. It is wise to book in advance. There is another at Salisbury, but that is quite a way north.

Hotels and Bed and Breakfasts

There are plenty of country hotels, and B&Bs in every village, but be prepared to pay a lot - especially during the peak summer months.

Again, as the New Forest is such a tourist destination, there are plenty of campsites. There are many privately-owned sites and Forest Holidays have ten caravan and camping sites. The sites are at Hollands Wood, Ashurst, Holmsley, Ocknell and Longbeech, Aldridge Hill, Roundhill, Matley Wood, Denny Wood and Setthorns. Only the site at Setthorns is open all year.

Ordnance Survey maps can be found in most travel/outdoor pursuit shops or you can contact Customer Information, Ordnance Survey, Romsey Road, Southampton, Hampshire SO16 4GU.

1Verderer is a British term meaning a judicial officer of a royal forest.