The Ordnance Survey Content from the guide to life, the universe and everything 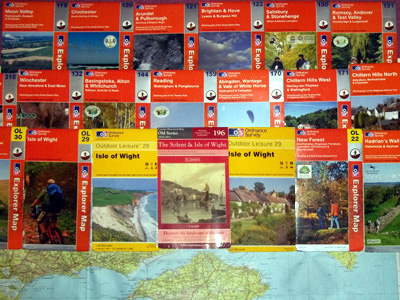 The Ordnance Survey (OS) is the national mapping agency of the United Kingdom and is widely recognised as producing some of the best maps in the world.

Formation of the Ordnance Survey

Maps of Britain had existed for centuries, but in a haphazard way. Cartographers had drawn maps of whatever took their fancy - counties, major roads, cities, or the lands of their patrons. There wasn't a widely applied standard for matters such as scales and symbols.

As the name suggests, the Ordnance Survey was originally a military project, undertaken by the Board of Ordnance, a forerunner of the Ministry of Defence. The Jacobite Uprising in Scotland in 1745 and later the ever-present threat of invasion from France convinced the army of the need for accurate and thorough maps. An engineer named William Roy led the mapping effort. It took eight years, between 1747 and 1755, to produce the map of Scotland. Roy later referred to it as more a 'magnificent military sketch than a very accurate map of the country'. After completing his task, he joined the army himself and spent much of his career working on mapping and experimenting with measuring equipment.

Roy was convinced of the importance of detailed mapping and had approached the government about it as early as 1763, while Deputy Quartermaster-General. Despite Roy pointing out the vulnerability of the South coast to invasion, his proposal was refused on the grounds of being too expensive. A second attempt several years later had the same result.

In 1784, galled by suggestions from the French that British mapping was inaccurate, King George III and the Royal Society commissioned William Roy to use triangulation to plot the respective positions of the observatories in Paris and Greenwich. Though it took a number of years, partly due to delays creating equipment accurate enough for Roy's exacting standards, he used the experience to reiterate his view that a complete national survey was necessary.

The Duke of Richmond, Master General of Ordnance, granted funding in 1790, but tragically, William Roy did not live to see it. Nevertheless, he is today regarded as the father of the Ordnance Survey. Under the instructions of the Board of Ordnance, a forerunner of the Ministry of Defence, surveyors used the technique of triangulation to map the entire country. The first of the new maps, at a scale of one inch to the mile, was published in 1801 and showed Kent.

It took decades to complete the survey, not helped by also deciding to map on a far more detailed scale - six inches to the mile (1:10,560). Rural areas were mapped at 25 inches to the mile (1:2500)! The 25 inch maps were finished in 1895 and the work of the Ordnance Survey was interrupted less than 20 years later by World War One. The expertise of the OS and its surveyors and cartographers was required to map the battlefields, helped by the new technology of aerial photographs.

In 1935, surveyors began the mammoth task of resurveying the United Kingdom. They transported materials to the summits of hills and mountains and constructed the familiar triangulation pillars - concrete pyramids better known as 'trig points'. 1935 also saw the formation of the Davison Committee, which was established to set the direction for the Ordnance Survey. Its report most notably resulted in the introduction of new 1:25,000 maps.

In 1939, war again demanded the services of the Ordnance Survey on a huge scale. 120 million maps were needed just for the D-Day Landings! Even into the late 20th Century, the organisation still retained the vestiges of its military origins. There wasn't a civilian Director General until 1974.

Ordnance Survey in the Digital Age

Despite the popularity of digital maps which can be accessed via computer, Global Positioning Satellite (GPS) unit or smartphone, Ordnance Survey still sells about 2.5 million paper maps each year. However, that represents only about 20% of their income. Advances in digital surveying and mapping techniques led to a fully digitised map of the United Kingdom in 1995, the first large-scale digital map of an entire country. Nowadays, sale of the digital data to government agencies and businesses is a far bigger money-spinner than traditional paper maps, though Ordnance Survey insists they have no intention of ending the sale of paper maps.

From their headquarters in Southampton, Hampshire, Ordnance Survey employs about 1,200 people, of whom 300 or so are surveyors. Updates to the maps are added to the MasterMap, which is the digital map containing all the mapping data.

There are two main ranges of Ordnance Survey maps, both of which cover the entire UK. They are:

Recent innovations include 'Active Maps' for certain popular areas, such as the Lake District and Snowdonia. These are laminated versions of OS Explorer maps. They are slightly more expensive but are designed to increase the life of the maps and avoid the risk of damage from the rain!

The Ordnance Survey has also introduced custom maps on either the Landranger or Explorer scale. These allow the customer to use the OS website to specify a centre point for a map - for example, your house - and the map will be printed around that centre point. Customers can even choose their own title and photograph for the cover. These maps are also useful if the area you want a map of straddles two of the OS maps, because it may allow the entire area required to be shown on one map.

OS Locate, introduced in 2014, is a smartphone app which uses the phone's GPS data to provide a grid reference for the user's current location.

Despite the decline of paper maps, the Ordnance Survey's willingness to adapt to the digital age suggests that the OS will remain at the forefront of mapping for years to come.