The Peak District, Derbyshire, UK Content from the guide to life, the universe and everything 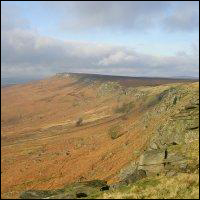 The Peak District is the oldest national park in England, designated in 1950, and, apart from Mount Fuji in Japan, it is the busiest national park in the world. It covers a large area of Derbyshire and serves as the weekend playground for thousands of people from nearby cities such as Manchester, Sheffield and Derby. Most outdoor pursuits are catered for within the bounds of the park, enabling visitors to indulge their passions for hill walking, rock climbing, caving, cycling or flying. If you're planning a visit, the Peak District tourist offices can point you towards the best locations for your chosen activity and help to find somewhere for you to stay.

The National Park comprises two distinctly different geological areas known as the White Peak (composed of limestone) and the Dark Peak (composed of a type of coarse sandstone known as millstone grit). The interaction between man and his environment has played a heavy part in shaping these landscapes. At one time, the natural vegetation would have been forests of oak on the acidic soils of the Dark Peak and ash trees over the lowland limestone soils. Over the centuries, the forests have been cleared for farming and habitation, producing vast tracts of open moorland in the Dark Peak and more gentle grassland over the limestone regions.

The Peak District encompasses a wide range of wildlife habitats and is correspondingly rich in flora and fauna. Although wildlife conservation was not the prime intention for the original designation, there are many conservation groups active within the Park boundaries. Groups work with local organizations to ensure the beauty and biodiversity of the Park is maintained without detriment to the livelihood of farming communities or the enjoyment of the region's many visitors.