'Watership Down' - the Book and Film Content from the guide to life, the universe and everything 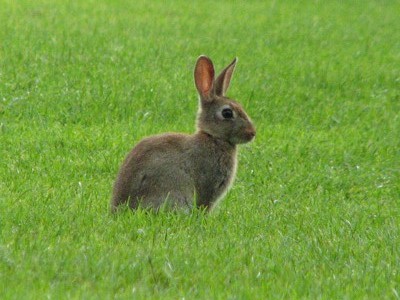 Watership Down is a big hill located in the North Wessex Downs in Hampshire, UK. The downs are easily accessible from Basingstoke and Newbury. The M3 Motorway runs to within a few miles of them, so it can be reached from virtually anywhere.

Watership Down itself is like a green version of Uluru1. It has a big tree on the top and is host to some famous and infamous rabbits.

It was immortalised in 1972 by Richard Adams with the publication of his novel Watership Down. The book was about a group of rabbits that left their warren and ultimately ended up living on the Down. Naturally, it didn't take long for fans of the fictional rabbits to find out that Watership Down and other locations mentioned in the book actually exist.

When a fan does some research on the Down, he invariably ends up learning of the real rabbits that live there. These are not the descendants of those that had trekked from Sandleford in the book. These rabbits have been hunted recently, though not to the extent that they don't live there (or anywhere) anymore. Remember that rabbits are a pain for the farmers that live near the down. They just wreck the farmers' hard work. So measures have to be taken to stop them running amok.

There are tours available to Watership Down.

Richard Adams' 1972 fable Watership Down is an anthropomorphic classic. It is an unpatronising children's book that can be read by adults. For that quality alone, this book is something different.

The plot follows the adventures of a band of rabbits, who leave their warren due to the rantings of one called Fiver, and set out to find a new home.

The rabbits have their own language called Lapine. Bigwig, Pipkin, and Fiver have their real Lapine names: Thlayli, Hlaoroo, and Hrairoo. Hyzenthlay, Vilthuril and Thethuthinnang are always called by their Lapine names. God knows why Adams switches between names in English and Lapine.

The book uses sad moments to great effect. Captain Holly's description of the destruction of the warren in Sandleford is a prime example. The next best is when Bigwig or Thlayli gets caught in the snare:

My heart has joined the Thousand, for my friend stopped running today.

It also has its more macabre moments. There are more rabbits killed in the book than in the film, and you can read about it in morbid detail. Again, Captain Holly's little story is a great way to show this:

There were all sorts of forgotten shafts and drops that led in from above, and down those were coming the most terrible noises - cries for help, kittens squealing for their mothers, Owsla trying to give orders, rabbits cursing and fighting each other. Once a rabbit came tumbling down one of the shafts and his claws scratched me... It was Celandine and he was dead.

Unmoved, are you? Read the rest of the book.

Then read the sequel Tales from Watership Down.

Released in 1978, Watership Down was a milestone. It was simply the greatest animated film at that time. The high standard of animation and the song 'Bright Eyes' made the film a firm favourite.

The movie featured the voices of such acclaimed actors Sir Ralph Richardson, Zero Mostel, Denholm Elliot, and John Hurt. It was written, produced and directed by Martin Rosen.

The film was an adaptation of the book, but it had some major omissions and alterations:

Considering that the movie is about rabbits and the like, you might be forgiven for thinking that it's a bit soft... but you'd be wrong. For an animated animal film it has a surprisingly graphic content2. Rabbits kill and are killed left, right and centre, especially towards the end. The showdown between Bigwig and Woundwort is particularly vicious.

It is also quite tear-jerking. Back in 1978, it brought lumps to throats and made young girls cry. The tragic demise of many of the rabbits, particularly the scene in which Hazel gets shot is a prime example. Some might find scenes like Holly's tragic tale and the wanton slaughter that revolves around Efrafa disturbing.

1The world's largest monolith, formerly known as Ayers Rock.2In film parlance 'graphic content' refers to things a sensitive person would not wish to see; 'adult' means bare bums, and so on... not clever dialogue.