University of Portsmouth, UK Content from the guide to life, the universe and everything 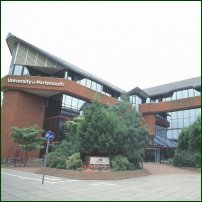 The University of Portsmouth is located, logically enough, within the city of Portsmouth. There are two1 campuses - the main Guildhall Campus, which sprawls among the city centre, and the smaller Langstone Campus near to Langstone Harbour over on the eastern side of the city. The institution was made a University in 1992, having been previously been Portsmouth Polytechnic since the 1960s. The Polytechnic grew from the Portsmouth and Gosport School of Science and Arts, founded in 1869.

At the time of writing, there were 19,155 students, mostly full time undergraduates, studying in five departments:

The University of Portsmouth was ranked 74th overall in the Sunday Times University League Table (2005), and rated a centre of excellence in teaching and learning for foundation degree provision and professional development in health sciences. The Earth Sciences Department is particularly known for its palaeontology, and was involved in the making of BBC's Walking with Dinosaurs and Live from Dinosaur Island. The Chemistry department (sadly no longer in existence, like similar departments at other institutions) was involved with the work on the Mary Rose.

In terms of entry requirements, you should always check the individual course details in the prospectus or on the UCAS website - for example French Studies requires 200 - 280 points, Geology 180 - 240 points and Diagnostic Radiography 260 points2.

As an ex-Polytechnic, Portsmouth's entry requirements are lower than the older universities. However, it should be noted that it is growing in popularity, and there had been a 67% increase in numbers of applications in the four years to 2005; of these only around 20% of applicants were sucessful.

The Frewen Library is located in Ravelin Park on the Guildhall Campus and currently undergoing a major extension. It is home to all the usual books, journals, computers and study areas you'd expect to find in an academic library. Frewen also used to have quite a nice little cafe/snack bar down in the basement. It's also handily or, during exam time, depressingly3 close to the Union building.

St Pauls Gym and the nearby Nuffield Sports Centre offer cardiovascular, free weights and resistance training equipment, exercise classes are held and squash/badminton courts are available. The main sports grounds are over at the Langstone Campus, though sometimes 'ground-share' of some of the naval facilities at HMS Temeraire and HMS Nelson occurs.

The University of Portsmouth Students Union (UPSU) - Voted best Union in the UK in New Musical Express in 2004. Formerly housed in the ex-NAAFI (Navy, Army and Air Force Institutes) building Alexandra House4, a new purpose-built Union was opened in 2002 at the other end of Ravelin Park, to the north of Frewen Library, though the main entertainment area (yup, the bars!) has been significantly altered recently.

Student Newspaper - The student magazine is called Pugwash - published monthly, in its time it has won the Best Student Magazine award from the National Students Union. There is also a weekly sports newspaper called Purple Wednesdays. The name stems from the ubiquitous day for BUSA (British Universities Sports Association) activities and the fact that purple is the corporate colour of the University (though strangely enough, it doesn't feature prominently on the university's armorial bearings). Sporting 'colours' (awarded annually for achievement and effort) are thus purples and half-purples.

The strongest rivalry is with the nearby Southampton University: local derbies are always hotly contested between the Skates (Portsmouth) and the Scummers (Southampton).

As you might expect from its location on the coast, as well as the usual sports and societies, sailing - both off and on shore - is offered. Other, less orthodox activities include Octopush (underwater hockey), Ultimate (team frisbee), the longest-running university paintballing club in the country, and PURE FM. The latter is the radio station, Portsmouth University Radio Experience FM, run by and for the students since 1994.

Living There and Getting Around

Due to the compact nature of the city, travel in Portsmouth is pretty easy. You're within walking distance of most things and cycling is easy given the lack of any significant gradients, and the bus system covers most of the main areas5. Though many students seem to have cars these days, parking in Portsmouth is a nightmare. If you can possibly leave it at home, do! Three mainline railway stations serve the city: Fratton (close to the football ground), Portsmouth and Southsea (the nearest to the Guildhall Campus) and Portsmouth Harbour.

Halls of residence are available; all new full-time students who make Portsmouth their firm choice by a certain date each year are guaranteed an offer of hall accommodation. The halls are divided into Langstone Student Village, Rees and Burrell halls (on Southsea Common) and the Guildhall halls. Potential students should note that acceptance of a place in some halls is conditional on the student not keeping a car in Portsmouth, and apart from a few spaces at Langstone Student Village, none of the halls has a dedicated car park. Since Trafalgar House and the YMCA were demolished, the standard of halls isn't too bad.

Brave freshers - as well as the second/third year and postgraduate students - tend to rent. The most popular area is Southsea, the funky student and locals area based around Albert Road, running from Fratton down to Palmerston Road, Southsea Common and the seafront. It features shops (both big chains and small independent stores), restaurants, cafés, bars, clubs, back streets and an awful lot of Victorian terraces. One of the advantages of Portsmouth is the coast (it does have beaches, but they are of the pebble variety). The Common is great for football, frisbee, sunbathing, kite-flying and generally chilling out, especially in the warm summer months. Beware of some of the winter storms: the proximity to the sea that makes the summer so nice can make the winter and spring rather 'inclement'.

Apart from the Halls, there little accommodation is to be found on the Guildhall campus itself as it is mixed in with the offices and shops and bars of the Commercial Road area. The Hard is where some of the ferries such as the Fast-Cat to the Isle of Wight, and the Gosport ferry depart and is also home to Portsmouth Harbour railway station. You can also find HMS Warrior, HMS Victory and the Mary Rose at the Historic Dockyard. The adjacent Gunwharf Quays is a major retail and residential (in this case definitely not student budget) development, including the (somewhat controversial) Spinnaker Tower.

Legend has it there are five types of pub (of which there are many) in Portsmouth: Locals only, students only, navy only, locals/students and navy/locals. You generally find out which are which, but by and large all three aspects of Portsmouth: city, university and navy get along fine.

After all that hard work and partying, it's time to dress up in funny clothes and shake hands with the great and the good. The University of Portsmouth's graduation ceremonies are held in July each year at the Guildhall in the city centre, allowing excellent photo opportunities on the steps and next to the large statues of lions that grace the front of this rather impressive civic building.
Depending on what you study, you will get to parade around in one of the following rather fetching get-ups:

Mortarboards for degrees also feature a rather fetching purple (what else?) tassel. The Graduation Ball is usually worth a ticket and is often held in a remote country house (free buses are provided) so noise levels aren't a problem into the early hours.

Grayson Perry (2003 Turner Prize winner)
David Chidgey MP (LibDem)
Shirley Conran (writer)
Ron Davies MP (Lab)
Ben Fogle (former 'Castaway', Atlantic rower and TV presenter)
1There used to be a third campus, Milton, former home of the Business School until it moved to the Guildhall Campus in 2004.2The requirements are only the basic points, most require study of a specific subject, and Radiography includes medical checks and Criminal Records Bureau screening.3depending on your view, of course.4 Demolished in 2001 to make way for a car park, alumni will get all misty-eyed at the mention of the Ranch Bar, the Garage and the Dry Dock, later the Lighthouse/Globe Cafe.5 Though the service isn't as regular as the adverts on the side of the buses would have you believe, and the routes can be a 'little' convoluted