Snakes and Ladders - The Board Game Content from the guide to life, the universe and everything 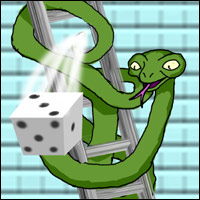 Snakes and Ladders1 is a very simple childhood racing board game. However its origins are reported to date back to the 2nd Century BC. It was played in India, and known by the name Moksha-patamu. In a time of great morality, it was originally a board game used by religious leaders to teach children about the difference between good and evil - climbing up the ladders representing good, and sliding down the snakes representing evil. The western world discovered Moksha-patamu during England's period of colonial expansion, and adopted it.

In around 1890 the religious and moral aspects were removed, and it was repackaged and sold in England as a children's racing board game.

Snakes and ladders is a game of luck played by between two and six players. Although it is marketed for children, it can be played and enjoyed by all ages. It is played on a ten by ten square board, numbered from one to 100; one is the starting square and 100 the end square. There are various amounts of snakes and ladders of differing lengths printed on the board, and a single die; the use of a dice-shaker is optional. Usually, coloured counters are used as playing pieces, but coloured buttons or any other objects small enough to fit on the playing squares can be used.

The varying lengths of the snakes and ladders will move a player's piece backwards or forwards, slowing down or speeding up their race to the end. Some of the snakes and ladders are short and are only a small setback, or a small advantage. However, there is usually at least one long ladder, that takes a player about a quarter of the way up the board, and most boards have the head of a long snake at square number 97, taking the unfortunate player almost a quarter back down the board, just when they were nearly at the winning square.

To decide who starts the game, the players take turns in rolling the die; the player with the highest score starts, and rolls the die again to move. The race to the end of the board begins.

All players start with their playing piece off the board, with square number one as the first square to count on their turn. More than one playing piece can occupy the same square. There is no extra turn for rolling a six. It is a good idea to clarify the rules before the start of the game.

The winner is the first player to reach the end of the board; square 100. There are different rules for how this square can be reached. One is that the exact number needs to be rolled on the die, either by remaining on a square of 94 or above, and waiting until the required number is rolled, or by moving to 100 then reversing back, according to the number rolled on the die. The other is that the exact number need not be rolled; decide at the beginning of the game which rule to follow.

Other Versions of Snakes and Ladders

Disney has produced Princess Snakes and Ladders. It has a very colourful board, featuring Disney fairytale Princess characters.

There is also a giant version of snakes and ladders ideal for floor or garden play. The playing board is a large plastic sheet, with large plastic counters and a large die.

Among the selection of online snakes and ladders is this version of Snakes and Ladders which can be played by one to four players, and asks questions about basic English words and phrases.

1Also known as Chutes and Ladders