Dice Content from the guide to life, the universe and everything 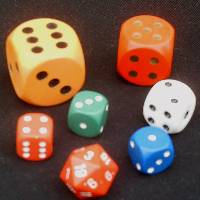 Dice are geometric shapes with numbers inscribed on each side. If you ever need to make a decision best left to chance, dice are the way to go.

The most common type of die (singular of dice) is the six-sided variety that comes with most family board games and is used in Vegas-stakes gambling as well. A six-sided die is a cube with the numbers one through to six, printed either in numbers or dots, on each side. The opposite sides of a dice will always add up to seven. Some dice are 'fixed', meaning they are illegally weighted to only roll one or a six. For craps1 players, the two playing die are often weighted to always roll a total of seven - the ideal craps number. Of course, this is quite illegal.

Lesser-known geometric shapes mean lesser-known dice. These tend to be the staples of several role-playing games. For example, Dungeons and Dragons involves just about any kind of die you can imagine. Pyramids create four-sided dice. Octahedrons make eight-sided dice. Decahedrons and dodecahedrons make 10 and 12-sided dice respectively, while 20 and 100-sided dice are also available at your local gaming store. 100-sided dice look more or less like a golf ball and can cost up to US$5.

In the case of 50-50 decisions, any dice can be rolled and the decision made is based on whether the number rolled is higher or lower than the median number for that type of die. Alternatively, use a coin.

Some dice have fur and, when attached by a short cord, make a good accessory to a car's rearview mirror. Very cool...