The Multilinguality of Astronomy Content from the guide to life, the universe and everything 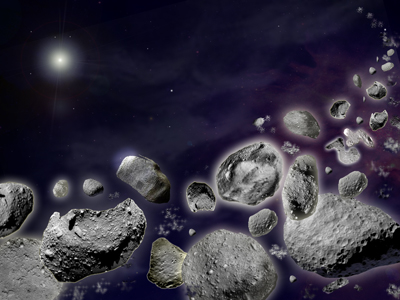 How many languages do you think you know, besides the one(s) you learned from birth? Unless your job is an interpreter, you might remember a smattering of French or German from school days. As your life has progressed you have probably picked up some Latin from watching gardening programmes or by trying to decipher your medical notes. You'll need to know rudimentary Spanish to enjoy the local cuisine while on holiday there. What about ancient Greek, or Arabic? No? Well if you have even a remote interest in astronomy then your knowledge of different tongues may be more diverse than you think.

It's all Greek to me

The names we call the heavenly bodies stem from a veritable hotchpotch of assorted languages both ancient and modern. Even the word 'astronomy' itself has its roots in the ancient Greek (astro means star and nomia means law). Most of the stars that you can see without optical aid have been catalogued by long-gone astronomers, and some systems are still in use today. German cartographer Johann Bayer (1572 - 1625) devised a system of using lower-case Greek letters to list the stars in each constellation in order of their brightness, tagging the shiniest 'alpha', followed by the 'beta' star, then gamma, etc. Combined with the genitive form of the constellation, eg tau Ceti in Cetus, this system of star-identification became known as the Bayer designation after its founder. Some mistakes were made, but the original nomenclature remained in place even when the first classification was way off the mark. Such a major discrepancy occurred with omega Centauri, which is a globular star cluster containing over ten million stars, not an individual star! Still, it's an enigmatic name for a fabulous celestial object.

The Northern Hemisphere's most famous star cluster The Pleiades has a Greek name meaning 'flock of doves'. Individual stars, especially the brightest, have common names as well as catalogue designations. Just a few star names which the ancient Greeks bequeathed us are:

Stars without common names are usually known by their Bayer designation, such as zeta Reticuli. One example of a star being better known by its Bayer designation than its name is Al Radif (delta Cephei). That's because it is a prototype for what are now called Cepheid variable stars. The study of stars such as these helps astronomers determine distance.

We have the Arabian culture to thank for most of the star names we use today. Just a few are:

The asterism Orion's Belt, well-known to most denizens of the planet thanks to its position on the celestial equator, is made up of the Arabian-named stars Alnitak, Alnilam and Mintaka.

Some people believe Latin to be a dead language, but there are Latin phrases inherited from the Roman Catholic religion ingrained in everyday English, eg RIP (Requiescat In Pace) – which means 'Rest In Peace'. It's also highly likely that the names we call the other planets in our Solar System are never going to be changed; Mercury, Venus, Mars, Jupiter, Saturn, Uranus and Neptune were all named after Roman gods. Earth, of course, is Middle English (the language of the 14th-Century astronomer/astrologer and poet Geoffrey Chaucer).

The tallest volcano in our entire Solar System is Olympus Mons (the Latin name for Mount Olympus, the dwelling-place of the gods) on Mars. Olympus Mons, which measures 14 miles high, used to be considered the tallest mountain as well, until the discovery of the Rheasilvia crater on the asteroid Vesta (the Roman goddess of the hearth in the home and the mainstay of family life). The 16-mile-high central mountain of the Rheasilvia crater was caused by an impact around a billion years ago. The crater is named after Rhea Silvia, the Vestal Virgin who, according to the legend, was raped and impregnated by Mars, the Roman god of war. She subsequently gave birth to twin boys Romulus and Remus, who survived an unconventional childhood to found a great city, but then fought to the death over its naming. Today the capital city of Italy is still called Rome, after the victorious brother Romulus.

The first variable star, discovered by German astronomer David Fabricius (1564 – 1617), was omicron Ceti, commonly called Mira, which is Latin for 'the amazing one'. It is well named; Mira fluctuates between magnitude +10 and +2, making it one of the brightest periodic variables. It is the prototype for a class of pulsating variable red giant stars. At the time of its discovery in 1596, most people had a geocentric world-view (in which the Earth is at the centre of the universe and every other heavenly body revolves around it). The study of Mira added to the weight of evidence which eventually led towards the acceptance of heliocentrism (the Sun is at the centre of the Solar System, with the Earth and all the other planets revolving around it).

Selenography2 is the study of lunar mapping. The large, dark patches on the Moon are called maria (Latin for 'seas') because a very long time ago, people studying the Moon thought the dark areas were bodies of water. Each area has the prefix Mare which is the singular of maria. Perhaps the most well-known is Mare Tranquillitatis ('Sea of Tranquility'), which is where humans first set foot on another world.

The ringed planet Saturn has a humongous collection of moons of all shapes and sizes. At the time of writing (April 2014) there are 62 confirmed satellites with the possibility of number 63, nicknamed 'Peggy', being discussed. Of the 62 known moons, some have been named after characters in Norse legend. The Scandinavian names include: Aegir, Bergelmir, Bestla, Farbauti, Fenrir, Fornjot, Greip, Hati, Hyrrokkin, Jarnsaxa, Kari, Loge, Mundilfari, Narvi, Skathi, Skoll, Surtur, Suttungr, Thrymr and Ymir. If they haven't given your spell-checker a heart attack, there's worse to come: Saturn has an 'Inuit group' of moons, which have been given monikers relevant to Inuit mythology – Siarnaq, Paaliaq, Ijiraq, Tarqeq and Kiviuq. The ringed world also has a 'Gallic group' of moons named after characters from Celtic mythology: Tarvos, Erriapus, Bebhionn and Albiorix.

Asteroids are lumps of rock left over from the formation of the Solar System. They are sometimes referred to as 'minor planets' but for the purposes of this Entry we will call them asteroids. As they have no light of their own, they're notoriously hard to detect. The ones which have been logged are given a number and a name – usually chosen by the discoverer then approved by the Minor Planet Center (MPC). For example, asteroid 42 (Isis) was discovered in May 1856 by English astronomer Norman Pogson (1829-91) and named after his three-year-old daughter Isis, who grew up to become an esteemed astronomer herself. Fans of Douglas Adams might like to know that there's a main belt asteroid named after him: 25924 Douglasadams (and for Hitchhiker's Guide to the Galaxy fans, there's also asteroid 18610 Arthurdent).

With astronomers all over the world tracking the skies for new discoveries, there are asteroids which honour deities from varied religions, people, places and even geographical features on Earth. Here is just a sampling from the multitude of known asteroids:

Trans-Neptunian objects (TNOs) are rocks orbiting the Sun beyond the orbit of Neptune. They have a vast mixture of weird and wonderful names taken from different cultures on Earth. Here's a flavour:

Beyond the Milky Way

The first 'citizen science' discovery was made by Galaxy Zoo member, teacher Hanny van Arkel from Heerlen, near Maastricht in The Netherlands. Her native language is Dutch, so she called her find 'the voorwerp' (thing or object). It turned out to be a unique astronomical object never seen before, so it was officially named after its discoverer. Hanny's Voorwerp is a 'cosmic ghost', or 'light echo', about 650 million light years3 away from our galaxy. It has since appeared on the Astronomy Picture of the Day website and been imaged by the Hubble Space Telescope. Lucky Ms van Arkel was interviewed on The Sky At Night by Sir Patrick Moore and he included Hanny's Voorwerp in his book The Cosmic Tourist4.

You like to-may-toes, I like to-mah-toes
– from 'Let's Call the Whole Thing Off' by George and Ira Gershwin

What this Entry won't attempt to do is offer up pronunciations for this polyglot of names; we'll leave that for the individual reader to attempt, and wish you viel glück (German for 'good luck').

1This is the star which featured heavily in Carl Sagan's novel Contact and the film of the same name.2After Selene, the Greek goddess and personification of the Moon.3A light year is the distance light travels in one year, roughly 5.88 trillion miles or 9.46 trillion km.4Co-authored by Dr Brian May and Dr Chris Lintott.