Vestal Virgins Content from the guide to life, the universe and everything 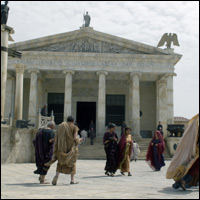 She said 'There is no reason,
And the truth is plain to see.'
But I wandered through my playing cards
And would not let her be
One of sixteen vestal virgins
Who were leaving for the coast
– lyrics from 'A Whiter Shade of Pale' by Procol Harum

In Roman mythology Rhea Silvia, the mother of Romulus and Remus, was a Vestal Virgin until she was ravished and impregnated by Mars, the god of war. Once the twins had been born, her punishment for breaking her vow of chastity was being buried alive. A servant was ordered to slaughter the babies, who abandoned them instead, setting them adrift in a basket upon the river Tiber. The story goes that they were suckled by a she-wolf and raised by a prostitute. Both attained adulthood, but then the brothers fought and one was killed. The surviving twin Romulus went on to found Rome.

The virgin goddess Vesta was extremely important to the Roman people: she ruled the hearth in the home and was the mainstay of family life. Sacerdos Vestalis (Vestal Virgins, as the goddess' handmaidens were called) were the only female priesthood in Rome and their most important duty was to guard the flame of Vesta in her specially-constructed temples.

The Vestals' collective virginity was important in preserving the safety of Rome. If any of them broke their vow of chastity they were deemed to have blighted Rome. Punishment was harsh; there was a special ritual culminating in the disgraced one being buried alive, for it was forbidden to spill their blood. Enough food and water was supplied for three days, so the admonishers were not themselves punished for allowing a consecrated person to starve. The other guilty party was flogged to death.

Roman people thought Vestal Virgins were endowed with powers above those of ordinary mortals, probably as a result of leading a 'pure' life. Pliny the Elder recorded in his Natural History that Vestal Virgins could 'root runaway slaves to the spot by a spell, provided the slaves have not left Rome', so they had their limits.

Keepers of the Flame

Only six Vestal Virgins tended the flame of Vesta at any one time, at each location of a Vesta Temple. Selected at a young age, girls had to be free of bodily imperfections and have still-living parents. Once chosen, a girl spent her first decade in Vesta's service as a student, and the next decade tending the flame. Allowing the sacred fire to become extinguished was punishable by death. The old flame was doused once a year in a special ritual and a new flame was dedicated to Vesta on 1 March (the Roman new year).

Vestal Virgins answered only to whoever held the title of Pontifex Maximus, who was specially appointed by the Roman administration to preside over rites and ceremonies. It was his job to monitor the duties of the Vestals and ensure no hanky panky took place. If there were any violations, the Pontifex Maximus set the punishments; a minor aberration might only merit a whipping rather than entombment.

Vestal Virgins were entrusted to keep important documents like wills and state papers safe. If a condemned prisoner happened to encounter a Vestal Virgin on his way to being executed, he could appeal to her and it was within her power to grant his request. If she did, it was his lucky day, for the prisoner was released.

Once invested, a Vestal Virgin wore a full-length, unbleached white gown called a stola decorated with pearls as a sign of purity. A mamillare, a ribbon banding across the chest and between the breasts, was deemed to accentuate her femininity. If she ventured outside, she wore a palla which was a long cloak, atop her stola. Footwear was always white skin mules made from sacrificial animal hide. Vestals wore a special headcovering called a suffibulum, a symbol of piety. This short white veil with a purple border was held in place by a brooch called a fibula.

The fashion for Roman women was to wear elaborate plaited hairstyles called sex crines (meaning literally, six braids), so they were not fans of caps and hats, and usually only wore a headdress or veil when getting married. Roman women also wore the stola and palla. The palla often had a hood attachment (cucullus) for head (and hairstyle) protection from the elements when going out.

Roman Sumptuary Laws governed what colours could be worn and by whom, as certain colours denoted rank, eg purple was the imperial colour worn by the Emperor and those carrying out royal duties on his behalf, like the Vestal Virgins. Stola colours which Roman women were allowed to wear according to their rank were: artificial white, blue, red, scarlet, orange, yellow, green, brown and black.

Freedom in a Gilded Cage

Far from being treated like slaves, Vestal Virgins were venerated; places of honour were reserved for them at public gatherings like the Apollonia games, parties and other celebrations. They lived in luxury and were allowed to move around freely with no chaperon, although they had the option of a personal bodyguard if they wished. They didn't have to walk anywhere, they could arrange to be transported by litter. In Rome it was a capital offence to pass beneath a Vestal Virgin's litter in the street! They were also afforded many more benefits and allowances than other Roman women, who were never free of a man's influence: first their fathers', then their husbands'.

Vestals didn't just sit around stoking a fire, preparing pomegranates, peeling grapes, filing their nails, brushing each other's long hair and looking pretty! There was work to be done, and many important rituals to observe throughout the year. Take for example the month of May, which is named after Maia Majestas, the Roman goddess of Spring and the chief goddess of the Seven Sisters (the Pleiades):

A secret festival for Bona Dea (the Good Earth goddess) was held on the night of 3 May in the house of the praetor (officiating consul) of the city. The mistress of the house prepared a flower-bedecked room, and wine and honey were provided for refreshment. The Vestals danced to the music of woodwind and stringed instruments until the early hours of 4 May, which was the last day of the annual Floralia Festival3.

The next few days were spent creating new argei to replace the old 'witnesses' which were tossed into the river during the Argei Rites ritual.

At the end of May, the Vestal Virgins began baking mola salsa (holy cakes), made from specially-refined flour, finest salt and pure water, for the Vestalia festival during June.

Once their ten-year term of service to the flame was over, they spent the next decade training new handmaidens for Vesta. A new chief Vestal (Vestalis maxima) was usually elected at this time. The departing women were then free to pursue a life for themselves, including marriage and the possibility of a family, as the 'retirement' age was 36-40 years. Demand for former Vestal Virgins was great, as it was considered an honour in Roman society to be married to one.

Certain Vestals who performed virtuous feats were specially honoured; for instance, in 61 BC a denarius (Roman coin) was issued showing the image of the Vestal Aemilia, who had saved the flame of Vesta from becoming extinguished by throwing her favourite garment upon it.

Vestal Virgins in the Classics

Vestal Virgins have been celebrated in the classics; we have already mentioned that Pliny the Elder recorded their duties in his Natural History. Aulus Gellius wrote about them too, particularly in Noctes Atticae4. Other authors such as Plutarch, Livy and Dionysius (Roman Antiquities) contributed much to our knowledge of the cult of Vestal Virgins, keepers of the flame of Vesta. Plutarch stated that the Vestal Virgin institution was created by Numa Pompilius, the second King of Rome, and there were only four Vestals at one time. On The Laws by Marcus Tullius Cicero (106 - 43 BC) explained their duties in full, and Ovid included them in his stories (Fasti V and VI).

Vestal Virgins in the Arts

Vestal Virgins became a popular subject in the 1700s and 1800s with the discovery of the Temple of Vesta in Pompeii, the city which was buried when the nearby volcano Vesuvius  erupted in 79 AD. In the art world they inspired many creative people including painters and sculptors.

The 'Herm of a Vestal Virgin' (1820) by Antonio Canova (1757 - 1822) is part of the neo-classical collection owned by the J Paul Getty Museum, and the marble bust is on display at the Getty Center in Los Angeles.

'The Veiled Vestal Virgin' is a lifesize, kneeling marble statue by Raffaelle Monti (1818 - 1881). Commissioned by the sixth Duke of Devonshire on 18 October, 1846, the magnificent sculpture was completed in 1847 and still resides at Chatsworth House. Keira Knightley stares at the exquisite figure in a scene from the film Pride and Prejudice, which was partly filmed at Chatsworth.

Just on the outskirts of Maidenhead, England, there are reports of a resident ghost known locally as the White Lady, who haunts Boundary Elm, Green Lane, Cold Harbour and Knowl Hill in the village of Littlewick Green. It is thought that – because the apparition is reported as wearing a long flowing white dress – in life she may have been a Vestal Virgin from the nearby Roman Temple on Weycock Hill, Waltham St Lawrence.

References to Vestal Virgins are still made in modern-day film and television, but they aren't always respectful:

1From the Latin 'to divide', this was a date which divided the month according to the calendar of Romulus. In May, it fell on the 15th of the month.2Some historians, including Ovid, record that the number of argei was 30.3Floralia (28 April to 4 May) was the festival time of Flora, Roman goddess of flowers. During this time the Romans wore fresh garlands of flowers around their necks, and children made small images of Flora decorated with flowers. The first full moon of May is still called the Flower Moon.4This translates to 'Attic Nights' which sounds like a porn film, so we'll just use the original Latin.