The Full Moons - What's in a Name? Content from the guide to life, the universe and everything 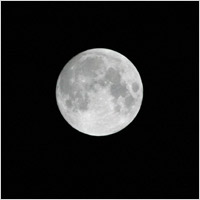 Many people are aware that the full moons have names. But where did these names come from? What do they mean? Just who would bother to name a moon? And not one, but 12 names - all for the same moon? What craziness is this?

Many cultures have named the full moons over the course of history, but it seems the most prominent set of names originates with the Native American Algonquin tribes of the northeast US. The Algonquins had a name, indeed sometimes several, for each recurring full moon. The names reflected the seasonal cycle of the year, and the entire month in which any given moon appeared was known by the name of the moon.

While the Algonquins inhabited what is now the northeast US, hundreds of other tribes and nations were spread across the rest of North America. Many Native Americans used a system of naming moons; some used the same names but applied them to different months. Over time though, it is mostly the Algonquin names that persevere, and these are known across the US and parts of Europe.

In an average year there is one full moon per calendar month. In order, they are:

Right. So, Which One's the Blue Moon?

On average a 'blue moon' occurs once every two-and-a-half to three years. Very rarely a blue moon will occur twice in a calendar year; in these years February will have no full moon at all - this is because the average month has 30.5 days, and the lunar cycle is only about 29.5 days.

A blue moon is the second full moon in any calendar month ... sort of. That's currently the widely accepted definition, but it is derived from a mistake in interpreting an older definition of a blue moon.

The formula for calculating the older blue moon was derived from using a calendar with fixed seasons of equal length as opposed to seasons that began based on the position of the sun: from winter solstice to winter solstice. In any season with four full moons, it was the third that was labelled the blue moon so as not to disrupt the designations of the other full moons.

The lunar blue moon was defined in the Maine Farmer's Almanac2 in 1937 as being the third full moon in a seasonal quarter that contained four full moons. Since it was the third full moon in a quarter that was 'blue', this blue moon never fell as the second blue moon in a month, but always on the 21, 22 or 23 of February, May, August or December. The Maine Farmer's Almanac identified more than a dozen such blue moons between the 1820s and the 1960s.

The modern blue moon is defined based on a misinterpretation of the original rules, publicised in a magazine article in 1940. Ironically the magazine, Sky and Telescope, was referencing its own earlier article as the source in the story.

The term 'blue moon' has been a part of the English language for centuries, but its meaning has changed several times over the years. Earliest references to a 'blue moon' indicate something off-the-wall or absurd: saying the moon was blue was akin to saying it was made of green cheese. From there it evolved to a phrase meaning never, something like 'when the moon turns blue' would translate to something similar, eg 'when pigs fly' or 'when Hell freezes over'.

Since it has been documented that the moon has, on occasion, actually turned blue, at times 'blue moon' means just that. Atmospheric conditions can result in the moon appearing blue, but this is an optical illusion. Most often this would be caused by ash from a volcanic eruption, or a forest or brush fire. Forest fires can be somewhat rare, volcanic eruptions even more so, and this is probably where the modern meaning behind the phrase 'once in a blue moon' came from, to mean something that happens rarely, or very infrequently.

Musically, 'blue moon' denotes sadness or loneliness, and can be found in at least half a dozen instances, eg 'Blue Moon of Kentucky' sung by Elvis Presley, and 'Blue Moon' (... you saw me standing alone ...) which has been covered by many artists and is a popular instrumental.

The most recent meaning of blue moon is that of the second full moon in a month. Although, as noted above, this originated from the error printed in a 1940 magazine article, this meaning didn't become widely acknowledged until sometime in the 1980s when it was published in a children's fact book, then consequently used as a question in the original Trivial Pursuit game. It's also a staple question in pub quizzes.

1The Sassafras is a deciduous tree of the Lauraceae (Laurel) family.2Now defunct, and no relation to the current Farmer's Almanac available annually in the US.