The Moon and the Tides Content from the guide to life, the universe and everything 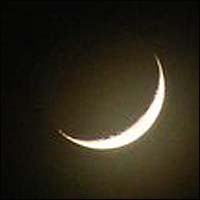 One of the enduring visions of children at the beach is of them building sandcastles and watching in a mixture of shock and horror as the ocean surges forward at high tide, demolishing their structures. It is also critically important to know when high tide will occur when burying oneself in the sand.

So what causes these tides?

Simply put, it is the gravitational dance between the Moon and the Earth.

Why are there Two Tides in a Day?

Of course, things are always more complicated than they seem. In most places , the tide comes in twice a day, not once. We are all taught that the Moon revolves around the Earth, but this is not strictly true. In fact, the Earth and Moon both orbit around a common point, called the barycentre. This point is inside the Earth but not at the centre. Being 4700 km from the centre of the Earth, it is closer to the surface than the centre.

When the maths is done, the two bulges turn out to be the same size, but in fact the second tide is often higher or lower than the first. This is because the Moon is not usually directly above the Earth's equator. It orbits the Earth close to the plane of the Ecliptic2, not the Earth's Equator. If the moon is North of the Equator, the UK (for instance) will pass closer to the bulge nearest the Moon giving a higher tide, while the other bulge will be South of the Equator, and have a smaller effect.

How Often Does it Happen?

In the simplified picture presented above, the tide comes in twice a day, so we would expect this to happen every 12 hours. But because the Moon is going around the Earth once every month, the Moon has moved on a little when the Earth has turned one full revolution. The Earth has to turn an extra bit to catch up. As a result, the Moon is in the same position in the sky every 24 hours 50 minutes. The tide comes in 50 minutes later each day.

Of course, the Sun has an effect on all this too. Even though it's a long way off, it is absolutely enormous, so its gravity is very powerful. In fact, at the Earth's surface, the force of the Sun's gravity is nearly 200 times that of the Moon's gravity. But the Sun's gravity is more even: it is nearly the same at the side of the Earth facing the Sun as it is at the side facing away from the Sun. This means that the Sun does not have as big an effect on the oceans. Its effect is about 45 percent as big as the Moon's.

The Sun causes two tidal bulges in the same way as the Moon but they are not as big and they come every 24 hours exactly, rather than every 24 hours 50 minutes. The effects of these are added to the normal Moon tide. They change the Moon tide in a few ways:

If the Earth consisted of a perfect sphere covered in water to a uniform depth, the tides would be regular and boring. Because the water is contained in the oceans by the continents, the actual tides are far more interesting. The water must flow into bays and seas from the ocean and then drain out later the same day. Since this involves movement of large volumes of water which can only move at a finite speed, the tides are delayed. The further from the ocean, the later the tide will be.

In some places, resonance patterns are set up between incoming and outgoing tides. This can result in places known as amphidromes where there is no variation at all in water levels, even though the sea all around is moving up and down. There is one such amphidrome off the East coast of Wexford, Ireland. Another is found in the Persian Gulf, next to Saudi Arabia.

The Mediterranean Sea, as mentioned before, does not experience any significant tides. The entrance to the Sea at Gibraltar is too narrow to allow large movements of water. Nevertheless, there is a small tide, where water flows from East Mediterranean to West and back again.

The biggest tides in the world are experienced in the Bay of Fundy, Nova Scotia, Canada. Here a particular combination of bay shape and depth exaggerates the action of the tides, causing a difference between high and low tide of as much as 15 metres.

A similar effect takes place in Europe in France's Mont St Michel Bay, between Normandy and Brittany. At the end of this bay stands the island of Mont St Michel. The tide goes out as far as 9 kilometres, leaving the island high and dry. The incoming tide is reputed to travel faster than a galloping horse. This is exaggeration, but it certainly comes in faster than a person can run. At the beach resort of Le Val André on the same bay, the lifeguards patrol the beach in boats, shouting through megaphones that the tide is coming in. It is a wonderful sight to see thousands of people being forced to flee. The sleeping sunbather can find himself half a kilometre from land in 2 metres depth of water in the space of only 15 minutes.

It is obviously of great interest to navigators to be able to predict the tides. In shallow harbours, boats can only enter and leave the harbour at high tide, so it is essential to know when that happens. This problem was studied in great detail in the 19th Century, culminating in Lord Kelvin's machine for calculating tides. This was an impressive collection of pulleys, wires and dials, which when fed the correct data could accurately predict the tide in any port. The machine can be seen in the Science Museum in London, England.

Nowadays, special computer programs perform the calculations. Tide tables are published in the sailors' almanacs. Novelty clocks which predict the tides tend to be accurate only within a couple of hours - they don't take into account the fact that the tides are early or late at neap tide.

The term 'tidal wave' is often incorrectly used for the giant wave known as a tsunami. These waves are in fact nothing to do with the tides, but are created by earthquakes under the sea and can cause devastation in coastal regions. They are most common in the Pacific Ocean.

There is in fact such a thing as a genuine tidal wave. If the incoming tide is channeled by the sides of a bay of a particular shape, a large wave can form which can travel up an estuary for surprising distances. One good example of this is in the Severn river estuary in England/Wales. Here the incoming tide causes a wave called the 'Severn Bore', which can travel up the river for up to 30 km.

In Saltstraumen, Norway, the incoming tide is so vigorous entering a wide inlet with a narrow entrance that a giant whirlpool is formed. On a good day, this can emit groaning noises. Many people think this is the origin of the Maelstrom myth, where a giant whirlpool swallows up passing ships. On many old maps the Maelstrom was marked in the sea off Norway, close to Saltstraumen.

What About the Full Moon and People?

Some biologists point out that since the human body contains 80 percent water lunar tides must have an impact on people as well. One h2g2 Researcher even notes that her father, who suffered from high blood pressure, started bleeding out of his eyes and ears at the time of the spring tide.

However, most scientists discount this. The tidal force on a person standing up is caused by the difference in the Moon's gravity between their head and toes, and it is very tiny. The difference between this force at its greatest (Spring tide) and at its weakest is an even smaller effect. A bird flying overhead would exert more gravitational force. So stories of people bleeding more at the full moon likely have nothing to do with tides.

1Centrifugal force is a convenient fiction. It is possible to explain it all using rotating inertial frames of reference, but the end result is the same.2The Ecliptic is the path of the Sun in the sky.