Sandcastles Content from the guide to life, the universe and everything 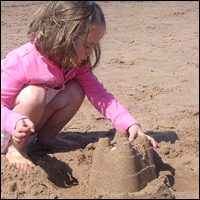 In Ireland and England, the traditional place for a day out is the beach. However, the sea is too cold for swimming, and the sun is usually behind the clouds so sunbathing is out of the question. Nevertheless, there are a still a number of traditional pastimes, for instance burying yourself in the sand, but most popular by far is building sandcastles. This pastime can be enjoyed by all and is limited only by your imagination.

The perfect beach has lots of sand. It should be fine-grained and brown in colour. The sand should be damp, as this helps it stick together, without being actually waterlogged, which makes it totally useless as a building material. It should be possible to dig down more than six inches with out hitting either waterlogged sand or the dreaded black sand.

If you dig downwards, you may encounter a layer of black sand underneath the normal brown sand. You should avoid this at all costs. It is composed of a mixture of normal sand and rotten seaweed, and as a result it stinks to high heaven. The smell can be bad enough in some cases to necessitate total abandonment of the potential castle building site, so use caution.

The end to which all sandcastles aspire is destruction by the incoming tide. If the beach slopes too steeply, the tide may take a long time to come in, necessitating much hanging around and complaining by any companions (or adults) who are not directly involved. Ideally, the tide should come in very quickly, ending the sandcastle building in one fell swoop. A good location for this is Jersey, where the tidal variation is one of the highest in Europe. One of Ireland's most popular beach resorts, Courtown, is sadly lacking in this respect. Due to a peculiarity of tidal currents in the southern Irish Sea, there is almost no tidal variation. The entire Mediterranean is also a complete wash out, for the same reason.

The most important pieces of equipment for sandcastle building are the bucket and spade. The bucket should be plain and round, in the shape which mathematicians call a frustum or truncated cone. It should have a flat base and slightly sloping sides. Elaborate buckets built in the shape of castles are best avoided. They are difficult to work with and they stifle the creativity of the aspiring castle architect. The spade should have a flat blade made of plastic. Although metal spades look good, they bite into toes far too easily.

The simplest kind of sandcastle is made as follows;

Once the technique of building sand pies has been perfected, a fortress may be attempted. This generally has a central keep which may be a mountain of sand with sand pies positioned strategically on it, or just a large rectangular block. Surrounding the keep, a line of sand pies with short lengths of wall in between form a defence wall. Leave a gap between two of the pies as a front gate. Finally a moat around the whole fortress finishes it off. Don't dig the moat in front of the gate.

Students of the science of fortification may wish to add other features, such as a glacis (gentle slope) or sally port (castle gate).

There are numerous variations on the basic theme which can be explored when the art of fortress building has been perfected. A giant central cone with a sphere on top is difficult to achieve but aesthetically pleasing. This style of construction encourages the use of hands, arms and other body parts instead of just the bucket and spade.

The sand pie array is another type of construction which requires immense patience. Arrays of up to 120 sand pies have been observed on beaches in Southeast Ireland.

A number of decorations are considered traditional:

Adding some beauty to the proceedings is a good way to rope in some of the female members of the party, who often consider the architectural aspects of castle building to be dull.

This form is rare, but is occasionally sighted around the coasts of Ireland and Great Britain. It appears to have been invented independently by a number of people and has been in existence at least since the 1970s. The construction material is different from other sandcastles in that waterlogged sand is used. The splodge castle is designed to look as grotesque and ugly as possible, and resembles the wax-encrusted Chianti bottle frequently seen hanging around in Italian restaurants. To make a splodge castle:

If you are fortunate enough to have a stream running down your beach, the possibilities are increased enormously. You can dam the stream and divert it towards your castle, filling the moat, making pools, channels and intricate waterworks. Of course, running water is a scarce resource at the beach; you may have to compete with other castle builders and fight for your water supply. This is in the grand old tradition of frontiersmen the world over.

Guarding your Castle against Marauders

This very important step fills the time between completing your edifice and the onset of the incoming tide. Urchins abound on beaches, both of the spiky shellfish and small boy varieties. The latter will attempt to destroy your work by kicking the castle, running across it or throwing stones at it. You must defend the castle to the last, forgoing all other beach pleasures.

While waiting for the arrival of the sea, you can amuse yourself by building tidal defences. These are various trenches and walls whose purpose is to stop the tide. The flat wall is the least effective. A large V-shaped wall pointing to the sea can divert incoming waves around the castle, with luck onto someone else's sand structure. Of course, all such attempts to stop the tide are futile, as shown by the well-known monarch, Canute1, a number of years back. They serve merely as a diversion to fill in time, and offer an opportunity for getting soaked by particularly vigorous waves.

The Grand Finale - Destruction by the Tide

If all is timed correctly, the tide should arrive at the end of the day. The sea will smash down the castle, levelling the field, and the fun is over for another day.

1He was giving a lesson to his obsequious courtiers who kept telling him he could do anything because he was so wonderful.