Why the Far Side of the Moon Looks Different Content from the guide to life, the universe and everything 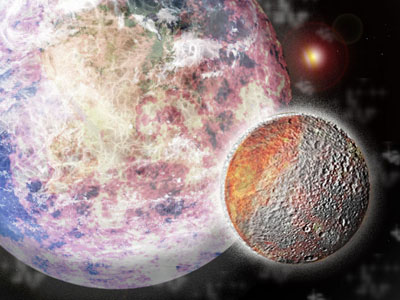 Humankind has been familiar with the face of the Moon since people first looked up into the sky. The Moon always keeps the same face towards the Earth, and that face is very distinctive. Parts of the Moon are white and other parts are dark. We called the dark parts 'maria' (pronounced MAH-ree-ah) and the white parts 'highlands'. The word maria is Latin and means 'seas' - in times gone by it was thought that they were actually seas of water. They were given names such as Mare Tranquillitatis (Sea of Tranquility) and Mare Imbrium (Sea of Showers). They kept these names although we've known for centuries that the Moon has neither sea nor air.

Because the Moon always keeps the same face towards the Earth, we never saw its far side until the invention of space travel. The Russians were the first to send an unmanned spacecraft around the back of the Moon. Luna 3, launched in October 1959, took the very first photo of the far side of the Moon. Everybody expected it to look just the same, with dark seas and white bits. Instead it turned out to be all white. The 'highlands' cover 98% of the surface of the Moon's far side.

So the two sides of the Moon, the near side and the far side, look quite different from each other. This has puzzled scientists for 55 years to date and is known as the 'Lunar Farside Highlands Problem'. In June 2014 a new theory was published which may finally explain it.

Some Facts and Established Theories

Before discussing why this should be, it's a good idea to become familiar with a few facts about the Moon and the leading theory on how it was formed:

How the Moon was Formed

The current theory about how the Moon formed is that very early on in the history of the Solar System, the Earth was smaller than it is now, about 90% of its current mass, and had no Moon. Let's call it the Proto-Earth. At that time, the Sun had far more debris orbiting it than there is now, with lots of small and medium-sized lumps of rock (known as asteroids) orbiting and occasionally crashing into each other or the planets.

Because both the newly formed Earth and the Moon were still molten due to the intense heat, their own gravity was able to pull them into a spherical shape and they settled down to be spheres.

How the Maria were Formed

Small things cool quicker than big things, so the Moon cooled down quickly. It soon developed an outer crust even though the inside was still molten. There were still many asteroids wandering around the Solar System, crashing into things. Many of these struck the Moon and the really big ones were heavy enough to break through the crust, causing the magma inside to come welling up. This flowed out over the surface of the Moon and hardened, causing the smooth, flat maria. Most of the maria are circular in shape.

Eventually the asteroids in the inner Solar System were almost all gone, having collided with the Moon or the inner planets. There are very few left nowadays, although still enough to cause concern. One as recently as 65 million years ago (1% of the age of the Earth) is thought to have wiped out most of the life on Earth, including all the large dinosaurs.

The Moon continued to cool and eventually it became solid rock the whole way through. Because the Earth is so much bigger than the Moon, it hasn't cooled down yet - the centre of the Earth is still thousands of degrees.

So Why No Maria on the Far Side?

Studies suggest that although the Moon is now solid rock all the way through, there are two distinct types of rock - a harder outer shell and a softer inner part. At the time of the asteroid bombardment, the harder part would have been solid rock while the inner softer part would still have been liquid. In addition, the harder part is thicker on the far side than on the near side.

So at the time the Moon was struck by asteroids, it had a thicker crust on the far side than on the near side. When asteroids struck the far side, they didn't crack the surface, so no magma welled up, and no maria were formed.

Until recently, however, nobody knew why there should be such a difference in the composition of the two sides.

Right at the start, just after the formation of the Moon, it was very close to the Earth, about one twentieth of the distance it now is. The authors of the paper have suggested that the Moon became tidally locked immediately, keeping the same face to the Earth. They estimate that within 100 days of its formation this was already the case. This is so short a time that the Moon hadn't even finished coalescing from all the bits of debris in orbit around the Earth. It is an eye-blink in the 4.5-billion-year history of the Moon, and is far earlier than had previously been thought by astrophysicists.

At the same time, the Earth was still very hot - somewhere between 2,500°C and 10,000°C - and remained at this sort of temperature for a couple of thousand years. It would have glowed in the Moon's sky like a giant sun. Even today, the Earth looks really big when seen from the Moon. In those days, the distance was much less, so the Earth would have looked enormous, and it was white-hot.

So one side of the Moon, the far side, was lit only by the Sun, with about as much heating power as it has at the moment, while the other side, the near side, was lit by both the Sun and the enormous, glowing Earth. The far side of the Moon cooled down quickly and formed a thick crust, but the near side was prevented from cooling by the heat it was receiving from the glow from the Earth.

A crust formed on the far side first, and then much later on the near side. By the time of the asteroid bombardment, the Moon had already moved further from the Earth, but the crust on the far side was older, thicker and harder.

Like all scientific theories, this one will have to be tested. With the recent discoveries of extrasolar planets in orbit very close to other stars, we will have plenty of chances to study what happens when a lump of rock is allowed to cool on one side while being blasted by heat on the other side. And perhaps it is time for another trip to the Moon, to do a bit of deep drilling. As well as confirming the theory, who knows what wonders we will find?