Perigee-syzygy Moon, or, 'Supermoon' Content from the guide to life, the universe and everything 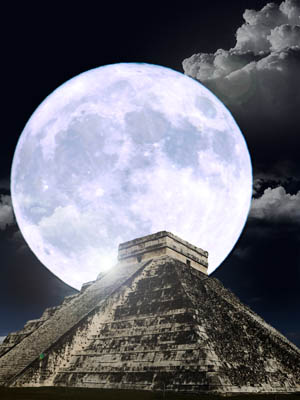 In the 21st Century we're used to 'supersized' things. They are descriptions for bigger, better, best. Some such words which immediately spring to mind are: superhero, supernova, supersonic and super-injunction. One superlative which has become a modern buzzword is 'supermoon', a magnetic word which amateur astronomers can drop into casual conversation and suddenly find themselves the centre of attention. The term 'supermoon' pre-dates the Internet but first mention of it appears to have been made in the late 1970s by astrologer Richard Nolle. Although 'supermoon' is not recognised by professional astronomers, who call the phenomenon of the closest Full Moon of the year perigee-syzygy1 Moon, they're fighting a losing battle in scoffing at the astrology-invented term. Whether it's scientifically incorrect or not, it seems the supermoon is here to stay.

The Moon's orbit is not perfectly circular around the Earth, it's elliptical, so sometimes it is closer to the Earth than at other times. This distance away over one full lunar orbit can vary by up to 50,000 km (30,000 miles), which can make the Moon appear some 14% bigger from the vantage point of the Earth.

The Moon goes through phases, waxing and waning over 29.5 days, when the whole cycle starts again. Approximately once every 14 months one of the Full Moons will occur around the time the Moon is at perigee – closest to Earth – and Hey Presto! we have a 'supermoon'. The difference between perigee moon (closest approach) and apogee moon (furthest away) is plain to see on the Astronomy Picture Of the Day webpage.

Supermoon of the Century

The closest the Earth and the Moon will be during this decade will be on 14 November, 2016, when the distance will be 356,509 km (221,524 miles), and the Moon will indeed be at full phase, making it, no doubt, the 'supermoon of the century' and a tabloid superstar. One for the diary, then.

Supermoons to Swoon Over

The effect of the supermoon can be greatly enhanced by using photogenic long-distance targets such as the Eiffel Tower and the Parthenon, but any Full Moon rising can be just as gorgeous, thanks to Earth's atmosphere causing a visual effect known as the 'Moon illusion'. Supermoons also provide unusual photographic opportunities – objects (and people) are much brighter in the glare and shadows are darker. Your favourite tree takes on a whole new hue. And, how romantic does date night sound, watching the supermoon rise above water over an eastern horizon and then chasing supermoonshadows in the supermoonlight?

The 'micromoon' – when the apogee-syzygy of the Moon, the Earth and the Sun occurs at Full Moon phase – is not likely to capture Joe Public's attention quite so much as the supermoon has. We assume this is all about bragging rights; research into small things which are revered above larger ones on h2g2 uncovered Chinese foot binding, and we decided to stop right there.

1Syzygy (pronounced siz-ej-ee) means a line-up of three gravity-bound celestial objects, in this case the Moon, the Earth and the Sun. It is a great word to impress people when explaining the phenomenon of the supermoon, but you have to be prepared to explain it.