Harvest Festival or Thanksgiving Content from the guide to life, the universe and everything 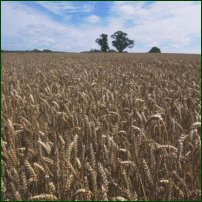 Today, Harvest Festival or Thanksgiving is celebrated every year, but just as is the case with Christmas and Easter, few people in the Western Hemisphere are aware of the true meaning of this custom. In a time when many people just go to the supermarket and buy whatever takes their fancy, it is not surprising that people don't seem to be aware of how much time and effort it takes to grow plants from seed to the fruits, vegetables and cereals they buy, because nowadays all of these are available all year round.

However, our ancestors knew what they were thankful for, which is why some forms of celebration have been held for millennia. At first, people made sacrifices to various gods and goddesses, often in the form of an animal which was killed for the purpose, or by leaving or even burning fruits, vegetables or cereals.

In later Judaism, two harvest festivals were celebrated: Shavuot (Pentecost, Harvest Offering) for the harvest of cereals in either May or June, and the Feast of the Tabernacles or Booths, Sukkot (Succoth), five days after Yom Kippur, as a general festival of commemorating the Exodus in October, lasting for a week. Both festivals are celebrated to this day.

You can find an early mention of a ritual of giving crops and animals to God in the Bible:

In the Catholic Church, an Erntedankfest is documented as early as the 3rd Century, but due to different climate zones throughout the world, there is no universally agreed-upon date.

The German Conference of Catholic Bishops from 1972 set the date to the first Sunday in October, but communities don't have to celebrate it. In Protestant communities in Germany, it is either on Michaelmas Day on 29 September, or on a Sunday close to this day.

There isn't any unique way to celebrate, either. Sometimes there are processions with decorated carts (drawn by horses) or tractors in the villages. The churches are decorated with the crops from the fields and special services are held. Other ways to celebrate are festivals which are in close connection with the seasonal work, such as the Almabtrieb, when the cattle that have spent the summer high up on the mountains are driven down to the valley for winter. This is usually sometime between Michaelmas Day and mid-October. Martinmas Day on 11 November is another harvest celebration day.

In England, as in other countries, the custom of celebrating the harvest dates back to Pagan times. Offers of corn to the gods of fertility, and a sacrifice to the spirits of the corn, usually in the form of a hare, were made to pave the way to another good harvest in the following year. Over the centuries, customs changed; the hare was substituted by a 'corn dolly' which was hung from the beam of the farmhouse until the next harvest. Once the harvest was in, the whole community gathered to a celebratory harvest supper on Michaelmas Day, when a stuffed goose was eaten, as turkeys were unheard of at the time. The celebrating of Harvest Festival in churches came into life when the Reverend Robert Hawker held a special thanksgiving service for the harvest in his church at Morwenstow in Cornwall, in 1843. The choice of songs sung at the service helped to spread and popularise the custom of decorating the churches with harvested foods. In addition to the church services, many schools throughout England celebrate the Harvest Festival, bringing food from home, which is given to people in need after having been on display during the service.

In France, La Fete de la Moisson (harvest), is an organised event, often with exhibitions of agricultural items from old and modern times, music, parades etc. Interested visitors are charged a fee for the event.

In the USA and Canada, Thanksgiving Day is a public holiday, which is on the second Monday in October in Canada and on the fourth Thursday in November in the USA.

In Canada, the date of Thanksgiving Day underwent many changes since it was celebrated regularly after the Confederation, and the reasons included such things as: 'For restoration to health of HRH the Prince of Wales on Monday' (15 April, 1872), 'A day of General Thanksgiving on Thursday' (16 October, 1902), and 'For general thanksgiving to Almighty God for the blessings with which the people of Canada have been favoured' as it is now. From 1879, proclamations setting the date were issued on a nearly yearly basis until in 1957 a last proclamation was issued, fixing the date permanently to the second Monday in October.

In the USA, the very first Thanksgiving Day is said to have been celebrated by English Separatists, better known to us as the Pilgrims, and Native Americans together in Plymouth in 1621. It was not so much an observance, but rather in the tradition of harvest festivals as they were known to the English as well as to the Natives. A traditional Thanksgiving was more of a church observance than a festival. Every colony had their own days and customs for Thanksgiving, and it wasn't until 1789 that the first national Thanksgiving Day was proclaimed for 26 November by President George Washington on Wednesday, 14 October, 1789. Like in Canada, Thanksgiving days were proclaimed in various years by various presidents, and the reasons for the observances varied, too. Abraham Lincoln was the first president to proclaim Thanksgiving on 3 October, 1863 as a national holiday on the last Thursday in November of that year, after 40 years of campaigning by magazine editor Sarah Josepha Hale and in the midst of the American Civil War. Since then, every president proclaimed one or more days of Thanksgiving every year; and the States observed this as they saw fit, until in 1941 Congress eventually declared a public holiday, to be held on the fourth Thursday in November for the whole of the USA.

In protest of the arrival of the Pilgrims and other European settlers who stole their land and killed thousands of Native Americans, many Native Americans and supporters have spent a 'Day of National Mourning' at Plymouth Rock in Plymouth, Massachusetts each year on Thanksgiving Day since 1970, even burying the rock, a symbol for racism and oppression, twice.

Today, Thanksgiving is a family gathering and millions of Americans set out to go home for the fourth Thursday in November every year to eat turkey, sweet potatoes and pumpkin pie, among other things, as a traditional Thanksgiving meal. It is not known whether the Pilgrims had turkey, but they didn't have flour, dairy products, cider or potatoes (which they thought were poisonous).

The cult about the presidential turkeys is taking a more and more weird form every year. Since the President of the USA has been given one living turkey and two dressed ones from 1947 onwards (maybe even earlier), it has been a tradition that the live turkey was pardoned and allowed to spend the rest of its life on a farm. Nowadays, two live turkeys are pardoned, in case one of the turkeys will not be available for the pardoning.

Since 2003 the turkeys have been given names by the public. Since 2005 they have been flown to Disneyland to be part of the annual Thanksgiving Parade there. You have to wonder - whatever will be next?