Buying and Cooking a Turkey Content from the guide to life, the universe and everything 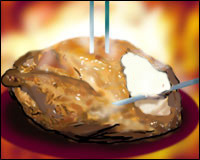 The turkey is thought to have first made an appearance in England in 1526 when a certain trader, William Strickland, bought six birds from American Indian traders whilst in America and sold them for tuppence each in Bristol. Henry VIII was the first English Monarch to try it when its popularity as an alternative to the more usual Royal fayre of beef, venison, red deer, mutton, swan (alternating with goose or stork), capon, coney, carp, pheasants, herons, bitterns, shovelards, partridges, quails, cocks, plovers, gulls, pigeons, larks, pullets, chickens, lamb, kid and rabbit, not forgetting the boars head bedecked with rosemary and bay,1 grew because the turkey was cheap, domesticated and fast to fatten up.

By the 18th Century turkeys were driven to market in large flocks, on occasion their feet being protected by little boots. Unlike their wild cousins, the domesticated turkey cannot fly.

As tastes changed and consumers preferred 'white' meat to the 'dark' meat of the wings and thighs, the turkey was bred to produce larger breasts. Most modern 'tom' turkeys are unable to fertilise the female eggs because of the size of their chests, so nearly all breeding is by artificial insemination.

Turkey breeding and rearing in Britain is regulated by the British Turkey Industry which aims to guarantee quality, traceability and good bird welfare.

The range of turkey products has increased dramatically in the last few years. Where once it was only possible to buy a whole bird, now, with the advent of freezing, there are far more choices; minced, turkey chunks, breast steak, escallops, drumsticks, sausages, stir fry strips, burgers, bacon rashers and crown roasts. Out of the 10 million units of turkey sold last Christmas, 87% of people in the UK chose a traditional roast turkey - two out of every three whole birds were frozen.

Available throughout the year in supermarkets and other outlets. Allow plenty of time for defrosting.

Alternatives to the whole bird

If using a frozen bird make sure that it is completely defrosted by following the guidelines given on the packaging. A small bird of around 5lb - 2.25kg - will take at least 20 hours, a larger bird of 25lb - 11.25kg - two whole days! Very small birds up to 5lb - 2.25kg - may be defrosted in a microwave. This option is not recommended for larger ones.

Contrary to older recipes, it is not now thought safe to put stuffing in the body of a turkey, only the neck, but the cavity may be filled with sliced onion, lemon, orange or fresh herbs to taste. Stuffing can be prepared weeks in advance and frozen or made the day before. It should be allowed to cool completely before use. Sadly the older tradition of cooking the turkey overnight so that the smells greet you on Christmas morning is also considered dangerous.

As a general guide, allow 18 minutes per pound - 450grams. Weigh the turkey after stuffing to calculate the cooking time. Fan-assisted ovens cook at a higher temperature so remember to take this into account.

There are plenty of ready-to-use stuffings of all flavours and textures on the market. Usually made with boiling water, the addition of a beaten egg (before the water) will produce a lighter mixture. Try mixing two or more bread-based packet stuffings together and adding a little finely chopped onion.

Other Ideas and Accompaniments

If you would rather stuff the neck of your turkey with sausagemeat then cook the stuffing for 20 minutes in a small baking tray towards the end of the cooking time. Either grease the pan, smooth in the mixture and dab a few pieces of butter or margarine over the top or form into balls. If you like a crunchy stuffing then cook uncovered, if you prefer a softer result cover with cooking foil.

Try putting beef chipolata (small, thin sausages) around the edge of the tray with the turkey an hour before cooking time is due to end. They will absorb the flavour!

No turkey dinner is complete without cranberry sauce. Again there is a wide choice of ready-to-use ones on the market, but it is delicious and easy to make at home.

Finally; a rich gravy. There are many brands of gravy browning and many flavours, but one made from the juices of the cooked bird is by far the best.

After removing the turkey from the baking tin, pour off the clear fat which has formed, leaving just the brown sediment. Sprinkle on a little salt and pepper and add 1oz - 25 grams - of plain flour, stirring all the time over a low heat. Make 0.5 pint - 10fl oz - of stock, use chicken or vegetable flavour if possible, add to the tin and stir constantly until the gravy boils. Strain into a warmed gravy boat. If you want a more substantial gravy, fry some finely chopped onions or shallots in the original juices before straining off the fat. Cook them until soft but not brown.

1All items on a menu served to Henry VIII.2This term may only been used where the birds have had, during at least half their lifetime, continuous daytime access to open air runs.3The turkeys are chilled quickly with blasts of cold air.