How to Build a Snowman Content from the guide to life, the universe and everything 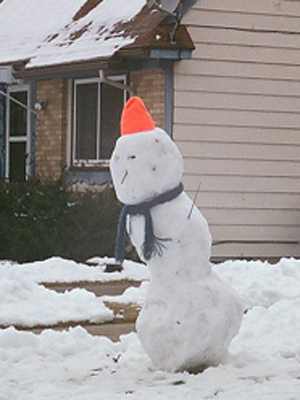 Put simply, a snowman is a figure modelled out of snow. They can be of differing sizes, usually dependent on the amount of snow and the size/strength of the person(s) building the snowman. However they are not usually taller than an average person. They are overwhelmingly male, as the name suggests.

There are two ways of building a snowman. The simpler is just to pile up a large mound of snow for the body and place a ball on top for the head. The more complex (and arguably, more traditional) is to roll three balls. One large one and one medium sized one for the body, and one smaller one for the head. Both methods are detailed below.

Step 1: Ensure that there is snow. Otherwise you will have nothing to build your snowman out of. Ensure that there is plenty of snow to build him. If you have a large area the snow does not need to be so deep because you can gather it from further away. However if you only have a small area, for example a small garden, the snow will need to be deeper. The snow must also be of the right consistency. If it is too powdery it will not compact very well. If it is too wet it will not mould well. Sometimes the snow has pieces of ice in which also doesn't work very well.

Step 2: Wrap up warm. This includes layers, coats, scarves, hats, wellies or other suitable shoes. There is debate over whether gloves are the best idea when building a snowman. The argument against is that the snow will make your gloves wet1 which just makes your hands even colder. It may be a good idea to take a pair of gloves to wear when you are not actually touching the snow, for example when walking home.

Step 3: If you are making your snowman using the mound of snow version, gather up lots of snow and pile it into a mound as high as you want his shoulders to be, compacting and shaping as you go. Try not to use snow too close to the ground surface to avoid getting too many sticks, leaves and mud in the body of your snowman. If you are using the three balls method you will need to make two balls for the body - one larger than the other. To make the balls take a large handful of snow and compact it into a ball as you would to make a snowball for a snowball fight. Then roll this ball along the ground so that the snow sticks to it until it is the desired size. You may need help to push it when it gets very big as snow is quite heavy when compacted. If there is a slope nearby you could start at the top and roll it downhill to make it easier. Try to roll it so that snow sticks to all sides and makes an even shaped ball. Then place the medium sized ball on top of the large ball. If it rolls off, try flattening the two sides that will be placed together. 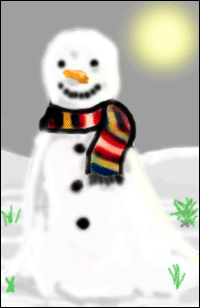 You should now have the basic shape of your snowman. To make him look individual and unique, and also more like a person, you will need to decorate him.

You can make arms by finding two sticks and inserting one either side of his body so that they stick out. Do this carefully so that he doesn't break apart when you stick the stick in. Or you can mould arms out of snow by simply adding bulges to his sides. Alternatively, and easier, you can leave him armless if you wish.

Traditionally, these are made from small lumps of coal. Three are inserted down his front for buttons, two in his face for eyes, and a row are made into a smile for a mouth. However as most people no longer have lumps of coal to hand, stones or pebbles can be used instead.

The commonest identifying feature of a snowman is his carrot nose. Simply take a carrot and insert into his face in the appropriate position. Again, try to avoid breaking the snow as you do so. If you don't have a carrot to hand you could again use coal, a stone, a fir cone, tangerine or whatever you can find that would do the job. Use your imagination. Alternatively you could attempt to sculpt a nose out of snow. However this may be fiddly if the snowman is only small.

Various items of clothing can be used to make your snowman look more human. Scarves and hats are the easiest items to place on him. If you have old hats etc that you no longer want you may wish to leave them on him. However it is much more likely that all you'll have is the clothes you're wearing so you'll probably just want to put them on him for a while, perhaps while you take a picture or just stand back and admire him. It is not recommended that you give your snowman too many of your own clothes as you'll get very cold very quickly, and they will be wet when you take them back.

As has been mentioned, snowmen are predominantly male or androgynous. However in this modern and enlightened society in which we live, it seems only appropriate that we could also have snowwomen. If you wish, you could decorate your snowperson to be a female, perhaps with a flowery hat. If there is plenty of snow you could even make an entire snowfamily, possibly even with a snowdog. The opportunities for snow sculpture extend as far as your imagination.

How long will he last?

Unfortunately the best things in life do not last forever and your snowman is no exception. Exactly how long he will last really depends on two variables. The first of these is the weather. If it rains this will almost certainly melt your snowman, as will a significant increase in temperature. The second is who encounters your snowman. You will usually find that most people are very considerate and will find your snowman charming and lovely and will simply look and maybe even chuckle to themselves when they see him. However there are some people who will find it funny to damage your snowman and possibly even knock him down. If the snowman is in your garden the only real risk is from siblings, but if he is in a park or field he may be knocked down quickly. There is nothing you can do about either of these circumstances, other than try not to be too upset when it happens. At the time of writing, as far as this Researcher is aware, no form of counselling exists for the loss of a snowman.

1Assuming you have normal woollen gloves and not the fancy waterproof kind people take skiing.