The Snowflake - Nature's Masterpiece Content from the guide to life, the universe and everything 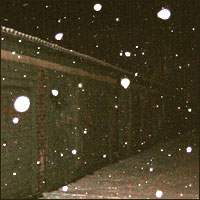 Love it or hate it, in many parts of the world snow is a fact of life at least part of the year. School children delight in waking to a snow-covered landscape, planning their snow forts and digging out scarves and hats for snowmen. Many adults, on the other hand, dread the snow for all its work, hassle and treachery. Rare is the individual who looks forward to setting their alarm an hour early in order to clear the path and the drive of snow, dig out the car and brave the roads (along with other even less-enthusiastic drivers) to get to work on time.

To the uninitiated snow is much more magical. Ideas of snow conjure up scenes of crystalline fantasy landscapes sparkling beneath the sun. Snow means sledding and snowball fights. Those seeing snow for the first time might just be compelled to roll naked in it, just for the sheer, freezing exhilaration of it.

With anticipation or dread, should one consider how the white stuff came to land on the lawn in the first place before getting on and just dealing with it? It's not absolutely necessary, but since we're here, let's.

Anatomy of a Snowflake

At a glance, it would be easy to say that snow is only rain that has the misfortune to fall when it's cold out instead of when it's warmer. In reality, that would be more accurate of freezing rain or sleet, and how do you tell one raindrop or sleetdrop from the next? Rain contains no artistry; the snowflake is an altogether different masterpiece.

A snowflake is born of a microscopic particle of dust1 which drifts through a cloud collecting water vapour. In the freezing atmosphere the mass crystallises, and due to the chemical make-up of the water2 it forms a hexagon.

As the crystal drifts though the cloud it encounters fluctuations in temperature and continues to accumulate water vapour. The new water vapour coming into contact with the already frozen crystal also freezes, and even the slightest difference in temperature dictates how the crystal will grow. Snowflake crystals form in temperatures between 0° and -15° Celsius (32° and 5° Fahrenheit), and generally take the shape of plates or columns, depending on the temperature range.

Spikes grow from the corners of the hexagon, which is why a snowflake will always have six sides. The intricate patterns are designed by the path the flake takes from formation to the ground; narrower spikes are formed when the flake passes through warmer temperatures, wider formations are made in the colder temperatures. Differences of just a degree or two change the formation of the crystals.

Well, no. It's possible for two smaller snowflakes to be identical, but as the crystals grow it becomes increasingly unlikely, as there is more opportunity for variances in the patterns. The larger a snowflake becomes before hitting the ground, the more likely it is unique.

It is said that, on average, snow is about one tenth as dense as standard rain. This means that for every millimetre that would have been rain, approximately a centimetre of snow will fall instead. This can be true in many instances but isn't always accurate - snow density depends on water content and can be much lower than this average.

One of the largest snowfalls on record measured an astounding 189 inches (4.8 metres) during one storm in 1959. From 13 to 19 February the storm hammered Mount Shasta in northern California. Another record-breaking storm in the 1990s left 39 inches (1 metre) in just 24 hours near Buffalo, New York.

There are many different types of snow. Heavy, wet snow makes the best snowballs and builds the best snow forts because it packs well. Light powdery snow doesn't stick together much, and is easiest to clean off the car before you drive. Crusted snow can stay pristine and beautiful for days; the top layer freezes hard overnight and forms the crust, preventing the powder underneath from blowing away3.

It's possible to make ice cream from snow. The simplest recipes require only a few ingredients4 and are popular with kids having a snow day from school. It is not possible, however, to preserve snowballs in the freezer for an impromptu snowball fight in July. Ice balls tend to leave bruises and break bones.

If you live in an area where it snows infrequently and you simply must have a memento when it does, you can preserve individual snowflakes.

1Think about that next time you try to catch a snowflake on your tongue.2H2O: two Hydrogen atoms stuck either side of an Oxygen atom.3It is the melting or collapse of this crust that leads to avalanches.4Milk or cream, sugar, vanilla and clean snow.