The Pomegranate - 'Jewel of Winter' Content from the guide to life, the universe and everything 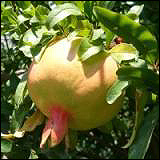 In the ancient world, the succulent pomegranate was a highly-prized fruit. Over many centuries, artists, poets and authors have celebrated the pomegranate's attributes: it has been linked with romance, longevity, fertility and sex appeal.

The Jewel of Winter

The pomegranate (Punica granutum) is fondly known as the 'Jewel of Winter' because the fruit is usually in season from September to November in the Northern Hemisphere and between March and May in the Southern Hemisphere. Pomegranate plants prefer a sunny location and deep soil with sufficient drainage. Propagation can be by seed, cuttings or layering.

The garnet-red (sometimes white or orange-red) flowers of the pomegranate shrub (or small tree) are called balaustine. A double-flowered variety of pomegranate is grown for decoration. The foliage is dark green, shiny and narrow; and the stems are thorny, making pomegranate shrubs useful for hedging.

The size of the fruit is similar to an orange and its skin1 is leathery and inedible. The inner flesh is a juicy, edible pulp which encloses many small seeds separated by bitter-tasting, creamy-coloured membranes.

One of my earliest memories is when I was at primary school; the teacher brought in some pomegranates which she sliced up, giving each of us a slice to eat. This was part of a Religious Education lesson, and was given to us as an example of a fruit that's grown in the Holy Land. I suppose pomegranates must have still been quite an exotic fruit in my childhood for the teacher to consider it worthwhile to bring one in.
— An h2g2 Researcher

The pomegranate is a native fruit of Southern Asia, Saudi Arabia, Iran, Bengal and Northern India, where it is dried and traditionally used as a spice named anardana. The fruit appears quite prominently in ancient Chinese architecture and paintings.

Ancient Egyptians were buried with many things to prepare them for their journey to the afterlife, including pomegranates. Images of pomegranates are also found in the paintings depicting the life of the deceased which adorned the walls of tombs.

Aristotelian philosopher Theophrastus (c372 - 287BC), a founder of the science of botany, provided a description of the pomegranate fruit around 300BC.

Gaius Plinius Secundus (23 - 79AD), better-known as Pliny the Elder, knew the pomegranate as Malum punicum (the apple of Carthage) and wrote about it in his Naturalis Historia.

The pomegranate fruit was an emblem in the coat of arms of Catherine of Aragon (1485 - 1536). She was the widow of Arthur, Prince of Wales but, more memorably, was King Henry VIII's first wife. However, when Queen Catherine didn't produce a male heir, His Majesty cast a furtive glance around the court for younger and more promising breeding stock, finally settling on Anne Boleyn. With a new queen ensconced in the Palace, her first decree was a new coat of arms, showing a white dove pecking at a pomegranate.

Spanish settlers introduced the pomegranate bush to California in 1769. The 'royal' fruit (so-called because its prominent calyx looks like a crown) was relished in Western culture until around the late 19th Century, but since then its popularity has waned somewhat.

The pomegranate grows, thrives, and bears most admirably.
— Thomas Affleck, Plantation and Garden Calendar for 1860

Due to its round shape and calyx, the pomegranate has a dubious connection to a weapon. The word pomegranate comes from the French name pomme grenate ('seedy apple'). 'Grenade' is taken from the grenate part — this is how the hand grenade got its name.

The Qur'an describes a heavenly paradise of four gardens with shade, springs and fruits, of which the pomegranate is one. Each fruit contains one seed that has descended from paradise, according to Islamic legend. The prophet Mohammed decreed that followers should eat pomegranates 'to purge the body of longing': a sort of anti-aphrodisiac or a pre-bromide substitute for monks, perhaps.

In Judaism, the seeds are supposed to number 613, one for each of the commandments. Pomegranates adorned the pillars of King Solomon's Temple and decorated the robes of Jewish kings and priests.

Pomegranates feature in paintings and on statues of the Virgin Mary and baby Jesus. They are also mentioned in The Bible2. According to some legends, the pomegranate was the 'tree of the knowledge of good and evil' in the Garden of Eden.

In Buddhism it is one of the three blessed fruits (the others are the citrus and the peach). The pomegranate represents 'the essence of favourable influences' in Buddhist art and according to Buddhist legend the demoness Hariti, who ate children, was given a pomegranate to eat by Buddha in order to cure her of that dreadful urge.

A picture of a ripe, open pomegranate (showing the seeds) is a welcome wedding gift in China, where it represents fertility, abundance, and a blessed future. Pomegranates also feature prominently in Greek weddings and funerals.

Pomegranates grow abundantly all over Afghanistan, where they hold the annual Anar Gul, a festival in honour of the red pomegranate blossom. The country's president, Hamid Karzai, is encouraging farmers to grow the fruit instead of their usual crop of opium poppies, which are used to make heroin. However, due to the lucrative drug trade, it is doubtful that the poor farmers will acquiesce.

In the myth of Persephone, the pomegranate stood for persistence of life, fertility and regeneration. After being kidnapped by Pluto (Hades), god of the Underworld, Persephone nibbled four pomegranate seeds offered to her by her captor, not knowing that the pomegranate was the symbol of the indissolubility of marriage, thus binding herself to him forever. After Jupiter (Zeus) intervened and settled the dispute by dividing the year into seasons, Persephone's return to her mother Ceres (Demeter), the goddess of growth and abundance, signalled the start of spring.

In Persian mythology, Esfandiar ate a pomegranate and became invincible. Alternatively, in Greek mythology the pomegranate is frequently represented as a symbol of fertility. Legend has it that in 814BC the Phoenician queen Dido3, founded the city of Carthage. Aeneas, a young god on his way back from the Trojan Wars, visited Carthage and offered the queen a golden pomegranate. The two shared it and they fell madly in love. Aeneas knew that his destiny lay in Italy, so grief-stricken Dido killed herself with Aeneas's sword. Whatever its romantic history, we do know that Carthage was burnt to the ground by the Romans in 146BC.

How to Eat a Pomegranate

Cut the fruit in half and scoop out the kernels with your fingers, a spoon or a cocktail stick. Open your mouth, taste the succulent, juicy fruit and savour the sensation as it slides down your throat. Yes, it's messy and sticky, it will stain your tablecloth and dribble on your clothes, but it's fun. Pomegranates are also great as a snack for toddlers.

All sorts of pomegranates are of a pleasant taste and good for ye stomach.... The juice of the kernells prest out, being sod and mixed with Hony, are good for the ulcers that are in ye mouth and in ye Genitalls and in ye seate, as also for the Pterygia in digitis and for the Nomae and ye excrescencies in ulcers, and for ye paines of ye eares, and for the griefs in ye nosthrills.... The decoction of ye flowers is a collution of moist flagging gummes and of loose teeth... ye rinde having a binding faculty... but ye decoction of ye roots doth expell and kill the Latas tineas ventris4.
— The Greek Herbal of Dioscorides

The pomegranate is listed as a treatment for tapeworms and diarrhoea in Andrew Chevallier's Encyclopedia of Medicinal Plants.

Pomegranates are a source of vitamin C, folic acid, potassium, polyphenols and antioxidants, which help to decrease the risk of heart disease and cancer. It has long been known that the juice has natural antiseptic properties — when applied to dirty scratches and cuts, it helps guard against infection. Roman philosopher and author Pliny the Elder (see above) prescribed pomegranate juice for pregnant women suffering from morning sickness, along with 25 other remedies. According to new research in 2005, pomegranate juice works against prostate cancer cells in laboratory tests.

Russian and Iranian pomegranate shrubs can withstand much colder climates than American varieties and the fruit is much larger and a deeper red in skin and seed.

Pomegranate juice can be purchased in the supermarket (or you can juice it yourself!). With bananas and a dash of orange juice it makes a wonderfully tasty non-dairy smoothie. Grenadine syrup is sweetened, thickened pomegranate juice. The juice can also be used to make jelly and wine.

Pomegranate molasses is an ingredient in Middle-Eastern dishes. It is often used as a marinade for meat dishes and as part of the dressing for tabbouleh, the national dish of Lebanon.

Hopefully, now that people know they need to eat five portions of fruit and vegetables a day in their diet to maintain a healthy lifestyle, the pomegranate may experience a resurgence in desirability.

1This can vary in accordance with the pomegranate's variety; some are pink-blushed yellow, some are shades of red and there is a purple/black variety.2Numbers 20:5, just in case you wanted to know.3She was also known by the name 'Elissa' or 'Elissar'.4Pomegranate rind and root bark was recommended as a treatment for tapeworm infestation.