The Discovery of Fire Content from the guide to life, the universe and everything 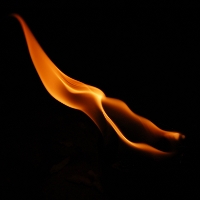 When early humans first started messing around with it, out on the plain, just after teatime1, they discovered it had many useful properties. Small animals, when placed inside the crackling orange flame, became crispy and began to smell and taste better. Some rocks when subjected to the same treatment bled out metal in a shiny grey liquid, which became hard and could later be beaten into a variety of interesting shapes, including spears to bring down beasts, which aided man in his long struggle to the top of the food chain.

The long, cold winter evenings simply flew by. This was due, at least in part, to the fact the long winter evenings were now a little less cold and dark. That and all the new sharp things and decorative ornaments the humans now had to play with.

So Who Exactly Discovered Fire?

Quite when the first human created fire is a fairly moot point.

Man's use of fire may have started with someone bravely lifting aloft a blazing branch ripped from a tree which had been struck by lightning. But as for creating fire from scratch, that would probably have come a lot later, perhaps when someone first tried striking two pieces of flint together near some dry twigs. Whether these actions came out of luck, judgement or boredom is lost in the mists of time.

Several religions believe that the knowledge of how to make fire was passed down to man by God, either directly or via a rebellious angel or demigod.

Greek mythology, for example, talks of the titan Prometheus who stole fire from the gods to give to man to balance up the fact that his brother Epimetheus had given all the other animals on Earth a load of godly gifts like speed, strength and great eyesight. Zeus, the king of the gods, forgave Prometheus at first, but grew angry with him later when Prometheus tried to help mankind to trick him. Zeus punished Prometheus by having him chained to the top of a mountain and every day of his immortal life an eagle would swoop down on him and eat his innards.

Think of Prometheus if you are having a bad day, it may help put things in perspective.

A Word of Caution

Nowadays mankind has become so sure of its control of fire that some people will happily take part in fire eating, while pyromaniacs actually enjoy setting light to a whole range of flammable items.

It always pays to remember, however, that fire is hot. Fire is very, very hot.

If it can make small animals crispy, just think what it can do to your fingers.

1Although the discovery of drinking tea was yet to catch on, so it must have been a pretty dismal teatime.