Wolves Content from the guide to life, the universe and everything 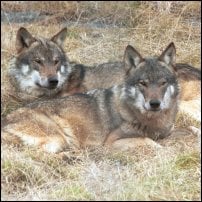 For as long as humans have been around and decided it might be a good idea to kill other animals and eat them, humans have had a rivalry with wolves (scientific name Canis lupus). This has spawned numerous stories depicting wolves as killers and liars, such as The Three Little Pigs, Peter and the Wolf, Aesop's fable The Wolf and the Lamb and Little Red Riding Hood - the story of a near-sighted, ditsy little girl who couldn't even tell that a cross-dressing wolf was impersonating her grandma.

The actual truth about wolves is that they learned a long time ago not to interact with humans, and most actively avoid them. However, this does not mean a wolf will not attack a human. If you believe that just the fact that you're a hairless biped makes you a tough hombre, try walking through the woods alone with a broken leg and a bloody arm. Wolves will avoid humans most of the time, yes, but please don't walk around with the equivalent of a large neon sign saying 'ALL YOU CAN EAT!' or give them your nearest and dearest domesticated animal to befriend - they won't. In fact, as wolves lose their habitats to the human population, an ever increasing number of them have been putting up a fight and have attacked people. One shepherd in France was attacked while out gathering his sheep, and people in India have died due to wolves.

For Those Looking for a Definition

For those unfamiliar with what a wolf is, it can be described as a dog-like animal with pointy ears and a great love of howling. Wolves can live to the ripe old age of 20 in captivity, but tend to live up to half that age in the wild. There are several sub-species of wolf, including the timber wolf, Rocky Mountain wolf, Arctic wolf, Mexican wolf, Japanese wolf and Indian wolf. On average, a wolf measures 36 to 63 inches (91 to 160 cm), has a tail length of 13 to 20 inches (33 to 51 cm) and weighs 18 to 79 kg (40 to 175 lbs).

Not all stories paint lupine in a bad light. Legend has it that the founders of Rome, Romulus and Remus, were raised by wolves. And many people actually live with a descendent of the wolf perhaps without being aware of it, for the domesticated dog (Canis lupus familiaris) is directly descended from the lupine family.

There are many similarities between a dog and a wolf, and a few crucial differences, too. For instance, dogs are much more sociable than wolves, as they have been selectively bred for a very long time for their sociability. An example of such behaviour can be seen by looking at the story of Greyfriars Bobby. Other side-effects of breeding for temperament are that the tail of a dog usually hangs down while wolves' are erect, and many dogs have floppy ears. Of course both the dog and wolf can communicate by howling, and both feed in order of rank. But when it comes to scavenging the dog hunts alone while the wolf doesn't.

In fact, as dogs and wolves are so closely related, they can pass on genes through interbreeding. Black dogs were traditionally popular among native Americans and came into contact with wolves; the two mated and produced black offspring. This flow of genetics was thought impossible at one stage, because they were thought to be two very different species, but it turns out that they are not. Researchers have also found evidence that dogs and wolves have interbred in Romania and western Russia; but Italian wolves have so far never done so.

The most common wolf species is the grey wolf, which once resided all over the northern hemisphere. However, after being hunted to near extinction, populations have been discovered roaming free only in Alaska, Canada and Asia.

Red wolves too are considered an endangered species. They were in fact believed to be virtually extinct, except for captive ones which were used in a successful breeding programme and released back into the wild plains of the south-eastern United States.

The Arctic wolf (Canis lupus arctus) is now the only sub-species that roams over the whole of its original range, where it's now protected. Its range is throughout the Arctic, excluding the permanent ice sheets and sea ice.

Wolves tend to live in a family group called a pack, which consists of a breeding pair (the alpha pair), their cubs, and unmated offspring of the previous two or three seasons. It is common to have up to 20 wolves in a pack.

There are also 'lone wolves' - usually young animals that have left the pack to go in search of their own territory. They generally maintain their distance, keeping away from other wolves - unless they're potential mates. Once a LW finds suitable and unoccupied territory, it will claim it by scent-marking; then set about attracting a mate to start a new pack.

Wolves communicate in a variety of ways; vocally and with body language. Howling is their main source of communication - a trait that has been picked up on and used in horror movies which feature werewolves. By howling, wolves can tell one another to be alert to their surroundings and warn of potential threats such as other packs, which prevents encounters that might lead to fighting.

Usually only the alpha pair will breed, and their pups will be brought food that has been hunted down by the adults. Wolves mate in winter. The females are pregnant for just nine weeks before they give birth to their litter, which can range in size from two to ten pups. When the pups are old enough, they will go hunting with the rest of the pack.

The pack tends to hunt together and will bring down caribou, elk, deer and moose. Wolves hunt in packs because such fully grown prey is far too powerful for a single wolf to tackle. Once a kill has been made, they eat as much as they can for they don't know when or where they will have their next meal.

Because food in the Arctic is so scarce, nothing is wasted. So a wolf will eat every part of an Arctic hare: skin, fur and bones. A single wolf in the Arctic has been known to eat up to 45 kg of food in one sitting.