Sheep Content from the guide to life, the universe and everything 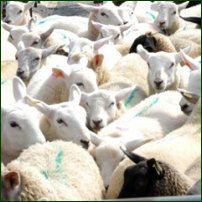 Some of the most influential animals to aid in the continued survival of the human race are quite probably the various breeds of domestic sheep. How so? Well, let's consider the uses of and advances made with sheep - rams, lambs and ewes all. Sure, other animals may also be important, but none are as comprehensively useful in comparison to the mighty Swiss Army Knife as the sheep. So, here is a brief and uncomplicated look at the many applications of this incredible animal, with the strangely sing-song scientific name of Ovis aries...

Baa Baa, Black Sheep
Have you any wool?
- Nursery Rhyme

One of the more obvious purposes of the sheep is the harvesting of its wool, or fleece. Wool can be made into many things - jackets, blankets, towels, draperies, or any other cloth. Many people enjoy the pastime of 'knitting', an often recreational pursuit that involves making clothing out of wool. Wool is the equivalent of hair on a sheep, and it is sheared off using clippers - a process not unlike a haircut. It is then cleaned of 'dags' and other dirt and muck the sheep may have picked up by laying about in a muddy field all day.

Dags are unkempt areas of wool around the sheep's backside, but the term has also been used in Australian slang for someone who is a bit silly. Unfortunately, a sheep's rear can also become flybown, meaning that flies will lay their eggs in the animal's flesh and maggots will eat away at both the living and dead tissue. Lovely image, eh? Once the wool is clean, it is then manufactured into yarn, and even dyed different colours to create a finished product that can be sold to make, among many other things, itchy jumpers, felt or toys for cats.

Mary had a little lamb. It sure was tasty with some new potatoes and a spoonful of mint sauce.
- an h2g2 Researcher

Sheep make good food. Sheep meat is eaten by a very large number of people all over the world, in particular those from China, Australia1, New Zealand and Wales2. The countries of Australia, New Zealand and Wales may owe some of their Rugby Union prowess to their men and women chasing down and tackling sheep when they're hungry - so it is surprising that China has not emerged as a power in the international game. Sheep meat, usually lamb or mutton, can be cooked in any style and is safe as long as it is done correctly.

Lamb, especially New Zealand lamb apparently, contains good amounts of essential amino acids3 required for protein building, iron that is fantastic for promoting healthy blood production and brain development in human children, calcium and potassium. And, for all those men who are reading this, lamb is also rich in zinc, required for growth, healing factors (the immune system) and sperm production4. Lamb is also part of a traditional non-allergenic diet which includes pears and rice. This is used as a total exclusion diet when testing for food allergies - new items are added slowly over time.

Some organs of the sheep are considered delicacies though, such as the eyeballs, testicles and glands (sweetmeats). Sheep meat is also used in haggis, a dish most commonly associated with Scotland. Haggis is made from the stomach, liver, heart and lungs of a sheep, and so is a delicacy that can be considered an acquired taste. Mouth-watering stuff.

Sheep milk is good. Really. An alternative to cows' or goats' milk, it can be utilised in just the same manner as these others including making chocolates, cheeses (like feta), creams, yoghurts, fudge and so much more. Sheep milk still contains lactose, however the protein molecule (both casein and whey) is much smaller and therefore more digestible than bovine milk. So although those with lactose intolerance should be wary of sheep milk, it's a little better than cow's milk for digestion.

The skin of the sheep is also very useful. It can be stripped from its wearer and tanned to make moccasins, jackets, boots, slippers, medicine, gum, shampoo, candles, rugs and all sorts of other things you shouldn't really think about too much. It was also once even used as a form of parchment. Often a little bit wrinkly, it was said to be difficult to write straight on and is perhaps why the handwriting is a tad messy on some medieval documents. As a result of the care in producing modern sheepskin products though, they can be rather expensive. The properties of the skin and wool also give it the advantages of being semi water-resistant, static-free, wind-proof, cold-proof - look, it can pretty much do the same for you as what it did for its previous owner.

Can You Stomach It?

Now we come to the intestines. Until plastics and other polyurethanes became so popular, sheep intestines were used for a wide variety of applications, the most common being condoms and instrument strings. Yes, 'catgut' was actually made from sheep's innards, not cats. However, that is not their only use. Sheep intestines have been used as sausage casings, and for other foods such as the Middle Eastern delicacy fawaregh, where they are very carefully scrubbed clean then stuffed with rice, mutton and chickpeas. However, the intestines have been found to contain parasites and other nasties, which can be fatal if ingested. The other product of sheep intestines, that is sometimes overlooked, is in fact its poo. Sheep poo is a wonderful manure, good for helping plants grow and even making paper.

In days of yore, sheep could be remarkably valuable animals, not just for the meat and such but also for the economics involved. Even one small flock (or herd) of sheep could give a range of people jobs and income. From the shepherd through to the land-owner, the humble sheep brought about a rich and diverse employment base with every single product made from sheep giving work to possibly thousands, including sheepdogs (yes, even other animals have benefited from the sheep's versatility). However, in modern times, owning even just one sheep can be a drain on resources, both financially and environmentally...

The lazy person's alternative to lawn-mowing.
- an h2g2 Researcher

Taking into the consideration that sheep enjoy eating grass, they graze like crazy. Many green fields of the world would be grotesquely over-grown if it were not for the sheep. And indeed some areas can become increasingly under-grown! The animal can be selective about what it eats though; it has a split in its upper lip which allows it to choose which leaves or grasses it munches on, with some breeds being so selective as to decide not to eat baby Christmas trees and so are employed to crop the grass surrounding plantations. Picky or not, a single sheep can consume a staggering 2 to 4.5 pounds of grasses and plants every day - one reason why some places actually pay farmers not to have any sheep!

Do Androids Dream of Electric Sheep?

What does the future hold for the sheep? This doesn't mean consulting the horoscope (Aries for those of you unfamiliar with the Zodiac). An amazingly intelligent creature (visit the Fact Sheep website to see just how intelligent), the sheep has provided humanity with many goods; it has given us food, clothing and employment, plus a fantastic scape-goat5 for testing things on, so its charity continues. The sheep, or more precisely Dolly the Sheep, has assisted with genetic research and no doubt her relatives will aid in the struggle to finally figure out life, the universe, and everything. Or just eat all the grass.

If you can't get to sleep, the other good use for sheep is to count them as you attempt to drift off. This is best done using your imagination, as wandering out into the fields at night looking for sheep to count with a torch in one hand and a calculator in the other really won't help with your insomnia.

1Where they are so enamoured with the beast, a giant concrete one dominates the skyline at a place called Goulburn.2There is a high likelihood of insinuation concerning sexual activities with sheep with men from these countries. There may be truth to the rumour, but it's best not to push the ish-ewe.3Meaning it contains 'high biological value' (HBV) protein, which contains all the essential amino acids required for growth, repair and maintenance of body proteins. The alternative, if vegetarian, is soya beans or tofu.4Why certain would-be Casanovas eat oysters, as they contain high levels of zinc.5No terrible pun intended.