Goulburn, New South Wales, Australia Content from the guide to life, the universe and everything 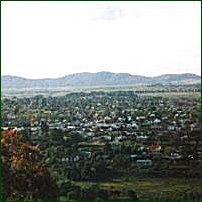 Goulburn, located in the southern tablelands of New South Wales, is a unique city. It is home to Australia's largest and nastiest prison, has a giant concrete sheep (see below) and a large lighthouse on a hill 200 kilometres inland. The lighthouse works however, as there have been no reported nautical disasters in the history of the city. Most Australians who have heard of Goulburn usually say:

Why would you stay in that cold hole of a place?

The fact is, some people like four real seasons, and snow is a thing to be celebrated. However, droughts also plague the area and the city is running out of water. This has forced some of the residents to consider recycling their own pee.

About two hours' drive south-west of Sydney, one hour north of Canberra, and two hours from the nearest eastern beach, Goulburn used to be a busy stop-over point for people travelling to Sydney on the Hume Highway. However, this ended in 1992 when a bypass cut the town off from the rest of the civilised world. The city has both an airport and railway station, the latter being built in 1869 to meet the growing wool-trade demands.

Goulburn was founded by convicts in the early 19th Century, much to the surprise and disdain of the Wiradjuri aboriginal people who had already founded it as Burbong. Goulburn was named after Henry Goulburn, Under-Secretary for War and the Colonies, and a pom1. Touted as Australia's first inland city, Goulburn is the seat of the Anglican Diocese (with a very pretty little cathedral), and it was the last 'established' city in Australia to receive a Royal Letters Patent from Queen Victoria on 14 March, 1863. Other features include the beautiful green-stone Catholic Cathedral and the very puritan Uniting (Methodist) Church. A Buddhist monastery close by and a Greek Orthodox church give the city some ethnic flavour.

Beautiful cream-puff colonial architecture abounds in Goulburn. The Post Office clock tower looks like a creamy-white wedding cake. The local courthouse is a domed Victorian confection, which has the effect of trying to scare the bejesus out of the convicts, and a nastier-looking British Lion of Justice has not been sighted anywhere.

A lot of people work at Goulburn Correctional Centre2, or Gaol. These people are affectionately known as 'screws'. The screws in natural homelife are just decent hard-working Aussies who get to wear a uniform and are able to shoot at people climbing over walls. A lot of other people are employed at the abattoir, or the 'abbs'. Again, these are hard-working Aussies who chop heads off animals and sweep up guts.

Since 1984, Goulburn has also been the site of the New South Wales Police Academy, where all the NSW Police are trained in the fine art of policing. The NSW Police are the direct descendants of the NSW Corps, or the 'Rum Corps', sent to guard the convicts in 1788. They are known by an assortment of names that would be offensive to most polite conversationalists. The police earn their graft in NSW as the convicts rebel daily - it's tradition.

Goulburn used to have the largest psychiatric hospital in regional New South Wales too, and this was named Kenmore Hospital. Kenmore was closed down and its residents were either put in group homes, quite a few of which are still in Goulburn, or left on the street to fend for themselves. The buildings of old Kenmore Hospital are reportedly haunted; there's also a museum in one of the old wards.

Goulburn is probably most famous for being a 'wool' town though. The Jewish society of Goulburn developed the city with the wealth acquired from trading in superfine Merino wool. There's a tiny little derelict Synagogue and Jewish cemetery dedicated to their memory. Shearers and other farm-working jobs still exist in Goulburn, and the abattoir employs many locals - producing a lot of beef for local, national and international consumption.

There are some great little restaurants in Goulburn, but visitors will appreciate the ambiance of the Paragon Cafe with its Greek flavours, humongous T-bone steaks and creamy pastas. Poets are also known to hang out in the Paragon, trying to be Bohemian or acting like Jack Kerouac on a bad day. 'Vogonish'3 poets can be found at the Exchange having a counter-lunch, so this is preferable for those who like their poems and conversation a little less demanding.

There are several pubs in Goulburn, a Soldiers' and a Workers' Club, and the little Goulburn City Club that has blues and jazz performers - as well as a never-ending art show. The Goulburn Club is the haunt of many would-be poets, intellectuals, musicians and artists. Flamingos Nite Club offers an alternative where you cannot avoid squelching across the floor in spilled drinks. Anybody who does not recognise evolution as a fact should observe the primate behaviours in Flamingos at closing time.

Goulburn has its own brewery called Bradley Grange, reportedly the oldest in Australia, and although the beer is not bad, it tastes a bit like creek water. Not as good as Tasmanian beer, where they actually get rainfall, but much better than Fosters. The brewery is also home to the local gay scene, and while the Researchers have been too chicken to check it out, local gay mates (friends) report that it's a good night out.

You can farm-stay (rent a cottage), camp or stay in a flash hotel. Hitchhikers will note that there is a good sleeping spot under the bridge on the Braidwood Road, but care should be taken in winter as the temperature can drop to around about -17°C.

Abseiling down the Bungonia Gorge to the Shoalhaven River is a favourite, as is bush-walking. Kangaroos are plentiful, and you might spot a koala or something even more unique. You will definitely spot sheep. For the kids, or those who need to brush up on their Latin and maths, the South Hill 19th-Century school offers a trip back in time - and you can dress up in the clothing of the 1880s. But it's the giant concrete sheep which attracts most visitors.

A 15-metre-tall, 18-metre-long cement Merino sheep nicknamed 'Rambo' by locals4, commemorates Goulburn's long and prosperous wool trade. It contains a gift shop on the ground floor and an 'educational' display about the industry on the second floor. Visitors can climb to the top and look out through Rambo's eyes over the dry, flat and brown grassy vistas if they choose. The attraction first opened its doors (underneath the belly, near the - well, the Merino is a ram, you figure it out), on 20 September, 1985, and remains open from 8am to 8pm, seven days a week. A restaurant is attached, but the food is standard truck-stop fare. It fills a hole, but don't expect a taste sensation.

1Australian slang for an Englishman. Most Aussies are descended from 'poms', and although one shouldn't disrespect one's ancestors, they are still a bit miffed that they were chucked out of the UK just because they nicked stuff.2A high security prison opened in 2001 for male inmates, holding such notables as Ivan Milat - the backpacker killer.3See Douglas Adams' Hitchhikers Guide to the Galaxy.4It's a big male sheep. A ram. Get it?