The Theory of Evolution - Part I Content from the guide to life, the universe and everything

...The world becomes full of organisms that have what it takes to become ancestors. That, in a sentence, is Darwinism.
- Richard Dawkins 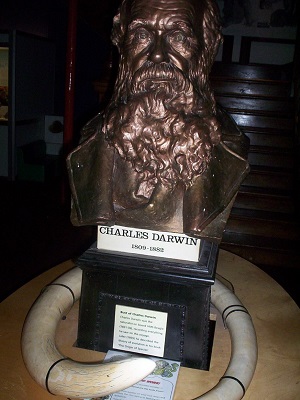 The theory of evolution is a staggeringly beautiful and rather clever concept that aims to describe how animals, plants, bacteria and all other living things have adapted, and continue to adapt, to their surroundings. The theory allows mankind to perceive life's history down the eons and understand how and why all living things came to be.

Evolution is the grand unifying theory of biology. It is a solid core running through all modern research from molecular biology to genomics to ecology. Where once biology was a disjointed group of subjects whose main role seemed to be just to classify life into neat categories, it is now at the forefront of scientific research. Indeed, the study of heredity - genetics - is said to be leading mankind into a biotechnological golden age with ever-more potent pharmaceuticals, cleaner fuels and improved crops.

A Very Brief History of Darwin and Natural Selection

A very observant Christian man named Charles Darwin once noticed whilst on a voyage to the Galapagos Islands that some of the little finches there had different beaks that were perfectly shaped to enable them to get to their respective food source, that they seemed to be adapted to fit their environment. After some conversations with his friend and fellow naturalist Alfred Russel Wallace, and some serious thinking, Darwin published his groundbreaking and controversial book On the Origins of Species by Means of Natural Selection in 1859.

To put it simply, the theory of natural selection states that a trait that gives a survival advantage is more likely to be inherited. Or put even more simply: the survival of the fittest.

With it being the 1800s, however, Darwin et al didn't know about genes. Darwin realised that traits were inherited, he just didn't know the little details. The modern synthesis of evolutionary theory takes all this into account. Natural selection is now just one facet of the dynamic, forever-argued about theory that is neo-Darwinism.

There are other microevolutionary forces1 that complement natural selection to create this modern definition of evolution. But before these are discussed, it would be useful to go over a bit of background information, namely 'alleles'.

Genes are the basic units of inheritance - one gene codes for one protein. Alleles on the other hand are variants of a trait or gene within a population. For example, the gene that encodes the protein melanin comes in varying forms within the human population. The more melanin you have, the darker your skin. All melanin is produced using the same gene; the variation comes about because of different alleles of that gene.

The concept of the allele is a useful one, as they don't just apply to genes. You can point at any given trait of an organism and say 'an allele controls that' and you'd be right. The colour of a dog's coat is controlled by many genes, but it can be said that it is one allele. Once you've identified an allele you can collect a lot of data and work out the 'allele frequency' within the population. This enables geneticists to uncover a lot of information about the organism they are studying. The forefather of genetics, a monk named Gregor Mendel2 did just this way back in the 1850s. It would be useful to note at this point that in population genetics time is not measured using hours, years or decades, time is measured using 'generations'.

Gene flow happens when individuals from one population migrate to another and interbreed with its members (all of the same species of course). This generally mixes things up in the new population by adding new alleles into the fray, or tipping the balance of the allele frequencies within the population. Gene flow tends to increase genetic diversity and therefore increases the options natural selection has at its disposal.

Genetic drift occurs randomly. It is the flux of allele frequencies within a population over time due to random sampling error. To illustrate, if a population has 100 individuals and there are two alleles - A and B, both at a frequency of 50% - in the population then it is statistically possible that next generation could have an allele frequency of 51:49, and the next generation different again. This seems at first inconsequential, but down the generations can have a powerful effect. Alleles can become extinct or they can become 'fixed' within a population. The effect is greatly exaggerated when the populations are small in number - a small change has a greater effect. If the population is large however, it is more shielded from the effects of fixation and extinction of alleles. For a more detailed explanation, see the entry on Conservation Genetics.

Mutation occurs at the level of the genes. Genes are made up of DNA, which is in turn a massively long polymer of things called 'nucleotides'. There are four types of nucleotides: Adenine, Cytosine, Guanine and Thymine, or A, C, G and T for short. These 'letters' act like a basic language, which codes for the different proteins that enable life to happen. It is the specific order of these letters that determine which protein is to be synthesised. However, these letters are subject to change or mutation.

Mutation can happen in a variety of ways. For instance, because DNA does not copy itself absolutely perfectly it is inevitable that errors will occur. A letter can be mistakenly lost or added (a 'frameshift mutation'), dramatically changing the resultant protein. Alternatively, a letter can be substituted for another (a 'point mutation'), changing just the specific amino acid that the letter helped code for. Environmental factors such as UV light, ionising radiation and even mechanical damage can cause mutations. It should be noted that mutations are more often harmful than beneficial. Just when you have a nice gene working properly, along comes a mutation that messes up its function. Because of this mutations can be lethal, especially if this happens in a really important gene that you need for, say, respiration or some other major metabolic pathway.

Meiosis describes the generation of sex cells. Although not a 'microevolutionary force' per se, it does play an important role. Let's use mammals as an example: all mammals have two sets of chromosomes3 (referred to as 'diploid' or 2n) that are paired with each other.

Sex cells are unique in that they have one set ('haploid' or 1n). One set of haploid chromosomes is inherited from the mother and one from the father to make a new individual with the normal two sets (2n). Every generation of individuals arises with novel genetic combinations, ready to be tested in the trial that is natural selection. On top of this is 'crossing-over' or 'recombination'. In each human parent during meiosis (before the diploid cell splits into a haploid sex cell) our 46 homologous chromosomes pair up and swap genetic material so that the genes received by the next generation will be thoroughly jumbled up in relation to the previous generation.

The interaction between an individual's genes and its environment results in its physical form. Or, to put that sentence another way, the 'genotype' interacts with the environment to give its 'phenotype'.

Mutations generate alleles. If the new allele coincidentally happens to be beneficial to the individual by increasing its fitness4 then the allele is naturally selected and it increases in frequency in the population over time. These new alleles could migrate and establish themselves (or indeed become extinct) in new populations via gene flow and genetic drift. These same alleles can be further mixed up to create new varieties via sex and crossing-over during meiosis. All microevolutionary forces interact with each other resulting in a near-continuous flux at the genetic level, which is channelled into evolutionary adaptations to the environment.

It is vitally important to remember that when beneficial mutations occur they are preserved. The chances that a mutation will be beneficial are slim, but they only have to happen once. Take the timespan that evolution occurs over and the probabilities start to plummet. Add to this the fact that mutations are cumulative - the selected individuals go on to accrue more mutations and more adaptations. The effect is one of a slow increase in complexity of living things over the eons.

Other Entries in this Project

1Relatively small evolutionary changes that tend to form new subspecies or races.2No, really. He was a monk and he invented genetics.3Well, all except one: the red viscacha rat of Argentina incredibly has four ('tetraploid' or 4n).4The relative ability to produce offspring.