Koalas' Fingerprints Content from the guide to life, the universe and everything 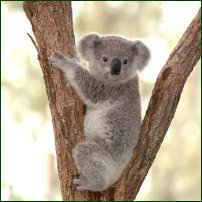 With their fluffy ears, big eyes and hard black noses in baby-featured faces, koalas are one of the classic symbols of Australian wildlife. Tourists from all over the world are happily snapped with these cute marsupials, but the vast majority will depart again without realising the most incredible thing about them. Koalas have fingerprints. Not an outstanding revelation? Read on.

Koalas are only found in Australia, and are the only surviving members of the family Phascolarctidae. Early settlers called them 'the Native Bear', and although they do have bear-like features, they are actually marsupials (even the scientific name Phascolarctos cinereus means 'ash-coloured, pouched bear'). Hunted to the verge of extinction in the early 20th Century (for their tough and surprisingly uncuddly fur), koalas are now a protected species and are found wherever there is forest on the east of Australia1.

But we didn't come here to learn all about koalas. Let's take a look at something even more fascinating...

Australia has been a completely separate continent for millions of years and all of its truly native mammals are marsupials, the koala among them. This isolation has allowed evolution to pretty much do what it wants; species have had the opportunity to develop strange characteristics with no great outside influence.

For example, the koala eats eucalyptus leaves almost exclusively, as most people know; what is less common knowledge is that eucalyptus is largely indigestible, nutritionally poor and contains many toxic phenols and terpenes. This is not a good food source, and a highly surprising selection to be the basis of any diet. However, this also means that the koala can exploit its abundance in the knowledge that no other species is competing for it. In fact, it has evolved very well in order to take advantage; it has a very tough liver to root out the toxins and an enlarged gut to make sure it gets every ounce of goodness out. Its gut bacteria is an excellent fermenter, and mothers even feed their young 'pap' (soft excrement) to make their digestion easier. The koala has adapted very well to its surroundings.

But What About the Prints?

Well, perhaps the most amazing revelation about koalas came in 1996, when an Australian scientist called Maciej Henneberg noticed that, like humans, koalas have fingerprints. Whereas we have lines and ridges across our palms as well, koalas just have them on their fingertips and on patches of their palms. Realising that if anyone had noticed this before, they had certainly never studied it, he investigated by running some koala and human prints through an electron microscope. He was astounded to find that they were almost identical:

The width of the ridge, its shape, general size and pattern is the same... I have a colleague who is a specialist of genetics in human dermal ridges and fingerprints. I showed her pictures of both human and koala fingerprints, without telling her which was which. When I asked her to pick the human print, she pointed without hesitation to the one of the koala.

The revelation was quickly picked up by the press, who happily reported that human fingerprints left at a crime scene could just as easily be those of a koala – and in doing so, missed an even bigger story.

Henneberg had stumbled upon a perfect example of convergent evolution. This means that different species in different parts of the world develop the same physical characteristics for the same purpose2. Just like our ape ancestors, the koala has developed fingerprints in order to achieve a better grip while climbing. Of course, it's nothing strange for another animal to have fingerprints - many of our primate relatives have them, and chimpanzee prints are very similar to ours too - but it is mind-bogglingly astounding that such a distant relative could have developed the same physical characteristic in total isolation.

Around 80 million years or so ago, the main lines of mammals split into marsupials and, well, all the others3. In most parts of the world, the marsupials were quickly out-competed by the rest of the mammals and either became extinct or, as in south America, retreated to small, isolated outposts4. It was only in Australia that the marsupials did the 'out-competing'.

At some point, if evolutionary theory is correct, a small mutation in the fingers of a distant ancestor of the koala suddenly gave it a slightly better grip on its tree. In fact, a very similar mutation gave a primate thousands of miles away on an unconnected continent the same advantage. Enough to make a difference to these creatures' lives, each evolved ridges and lines on its hand in a very similar way; in fact, so similar that an electron microscope couldn't tell the difference.

So if you go to Australia, don't just have your photograph taken with a koala. Make sure you get a good set of prints, too.

1There have, however, been recent concerns about the koala's vulnerability. See BBC News.2Coincidental evolution is a little different, and refers to gene mutations within a species.3Apart from the subclasses Australosphenida and Eutheria, all the other lines have become extinct.4The possum is also common in parts of north America. Interestingly, red-necked wallabies are also doing well in parts of England.