Sunday Morning Birdlife in Sydney, Australia Content from the guide to life, the universe and everything 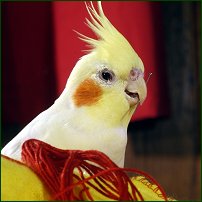 Sunday - ahh! Sunday in Sydney - a day for rest and sleeping in. Well, it would be, were it not for the fact that come the springtime, mornings tend to get very noisy in Sydney. The gentle, early morning twittering of magpies and Rainbow Lorikeets usually gets drowned out by the raucous, 110 decibel cry of the Sulphur Crested Cockatoo. These noisy birds, envious of the lorikeets enjoying breakfast, attempt to drive them away from their food by kicking up a loud protest. This goes on for a while, until, eventually, the cockatoos realise that the lorikeets are simply ignoring them.

Anyway, the early morning peace is restored. Restored, that is, until ten minutes later, when the Kookaburras start laughing at the futile attempts of the bumbling cockatoos to assert their territorial rights over the laughing Rainbow Lorikeets.

Finally, the ritual is over. It's 7am and the assorted roadworks and traffic noise now drown out the birds' morning chorus. And so, on Sunday mornings in springtime, sleep returns to Sydney.

The Rainbow Lorikeet* is widely distributed along the east Australian coast, south from Cape York and down into Victoria. Often noisy flocks of up to several hundred may converge on flowering trees to feed and roost. They grow to about 30cm (12") long and weigh about 125 grammes.

A young bird will rapidly become very tame, and will be a constant source of amusement. It's not uncommon for a wild bird, who has been regularly fed by a household, to fly in through an open window or door and remind everyone loudly that it's well past feeding time. They are constantly playing; one of their favourite tricks is to play dead by going to sleep lying on their backs with their feet up in the air.

Cacatua galerita or the Sulphur Crested Cockatoo grows to about 50cm (20") and weighs 1kg (2lbs). It can be found in an area extending from Tasmania upwards through Victoria and New South Wales all the way up to the northernmost tip of Queensland; and through the northern part of the Northern Territory into the Kimberly area of Western Australia. The Sulphur Crested Cockatoo forms flocks of several hundred birds. They often feed on the ground (predominantly on seed, nuts and fruit), and in such situations some of the flock will act as sentry birds in trees to alert the rest of the flock if danger approaches. When flying as a flock, they will frequently call out with a raucous, deafening screech.

These cockatoos can make an excellent pets, however they tend to bond with one favourite person eschewing the company of everyone else. They are clever and consequently need a lot of toys and attention to stop them becoming bored. They're not usually noisy except for at dawn and dusk though they are known to screech loudly during the day.

It is the opinion of some, however, that Sulphur Crested Cockatoos are noisy, evil, vicious and destructive creatures.

The Laughing Kookaburra* is a very common Australian bird. Let's face it, it is an icon. Their natural habitat is eastern and south-eastern parts of Australia. They now range throughout the south-western corner of Western Australia, having been successfully introduced there in 1897. The kookaburra is the largest member of the kingfisher family and can live up to 20 years. It hunts snakes, lizards, small birds and rodents but consumes mainly insects.

1Forget about Polly or Pretty Boy. Any self-respecting cocky will tear your nose off for even suggesting names like those.2Based on the Sulphur Crested Cockatoo's observed dietary preference.