Using Calligraphy Content from the guide to life, the universe and everything 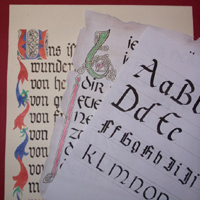 Calligraphy is an art; an art based on making beautiful curves and lines. It's not just about writing to get an opinion clear, but to make it please the eye and also look divine.

The word calligraphy is derived from the Greek for 'good' or 'beautiful'. Some think it's the best name it could ever have.

About two thousand years ago, when the letter forms reached a peak of perfection, the Romans cut their alphabet into stone. Their letters looked rather decorative, because of their special way of cutting, with some thick, and some thin lines. These letters were majuscules (capital letters or upper case). It was some time before what we now call the minuscules (small letters or lower case) which we would recognise today, were used in manuscripts. Then, when paper and animal skins were used, the early scribes wrote with hardened feathers, cut into a pen-shape. The split broad-edge nib gave the letters their characteristic thicks and thins. We still use an adaptation of those early pens today and call them calligraphy-pens.

You will need one or more calligraphy pens, preferably with changeable nibs in different sizes, some layout paper, a sharpened pencil with a hard lead, and a long ruler and an eraser for removing the guidelines. Start with an extra broad nib; this will show your letters clearly. Gradually progress to the smaller size nibs when you are getting the hang of it.

Making individual strokes and patterns is a good way to become familiar with your new calligraphy pen(s). Always hold your pen nib at the same angle through a sentence. If you change it, the type of writing will change also, so the result will look messy.

Calligraphy Styles and How to Use Them

Measure out the correct height for the guidelines of each calligraphy style by turning your pen so that it is horizontal and making a series of little steps downwards like a diagonal line on a chessboard. These are called nib widths. The little steps should just touch one another and not overlap.

Hold your pen at the correct angle for each alphabet style. As mentioned before, the letter-shapes change when your pen nib is at an different angle.

Holding your pen at an angle makes the thick and thins on the letters in calligraphy. Do not use your pen to exaggerate the strokes. This often makes the letters look silly.

It is always quite messy and hard to learn calligraphy - but with patience and enough sheets you soon get the hang of it. Good luck!