Flies Content from the guide to life, the universe and everything 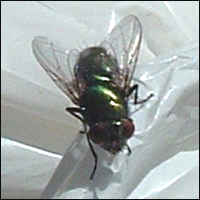 We are plagued by these nasty little creatures throughout the world. Midges are certainly among the smallest flies, being about 1.3mm in length; while the mydas fly, found in South America, is one of the largest species with a wing span of up to 7.5cm across.

There are around 100,000 kinds of flies worldwide, which forms the largest part of the insect family. Unlike most other flying insects, they have only two wings. Their scientific name, which is Greek, is diptera and means precisely that...'two wings'.

We are all familiar with the common house fly1, which irritatingly buzz around our homes, beating their wings about 200 times per second. These insects seem to act like spies... The flies on the wall make us feel as if they are making reports on us and taking them back to their base. Their eyes are composed of thousands of individual lenses; you cannot escape their gaze. They make the bristles on the back of your neck stand on end.

Interestingly, though, there are many insects which we do not normally think of as flies, like mosquitos, but they too are every bit a member of this two-winged family. Some crafty flies imitate bees, our pollen-collecting friends, and wasps, looking and acting very much like them; but, as they only have one pair of wings, the imitators can be easily recognized as being members of the fly family. The four-winged 'flies' such as butterflies, caddisflies, dragonflies, are not really flies at all, as their names imply.

Many of these dirty creatures that feed on us and our food outnumber the human race manyfold. People try to combat these six-legged fiends, with varying degrees of success, with sprays or deadly fly swats. If you don't have either of these, a rolled up newspaper makes a good substitute. In addition, some plantlife helps rid us of these troublesome creatures; there are many insectivorous plants, such as the Venus Flytrap, that consume large quantities of insects. Insect infestation is also tackled by attacking or removing their breeding grounds, such as stagnant water, decaying meat or rotting vegetation.

Although most flies are completely harmless, some are among the most dangerous pests known to man, carrying germs that cause serious diseases such as malaria, sleeping sickness, filariasis, and many more. They poke their noses into our business; they spread diseases and plagues, killing more people than any war.

Actually, they don't really have a nose, but instead, a kind of mouth that's almost funnel-shaped. The thickest part is at the head, and the tube-like section called the proboscis narrows to a point. Biting flies don't really bite; instead they feed by using the proboscis like a penetrating straw. The non-biting fly has a sponge-like tip to their proboscis called the labella. If the food they require is not in liquid form they break it down by secreting saliva, which liquifies it prior to ingestion.

Gnat is a general term that is given to a variety of small fly. Some feed on the blood of animals, including human beings, giving a painful bite. Others do not bite and feed on vegetation or waste. Flies love human waste, not only can they feed on it, they use it as a breeding ground; human waste and stagnated water are their favourites. The way in which the gnats eat can vary depending on what they feed on, but in most cases they stick their mouth into the food and suck the juices out, like sucking liquid through a straw.

Midges are also members of the fly family. They look like tiny mosquitoes, which are their distant cousins; but true midges do not bite. These insects often appear at dusk in large numbers. Some people have not heard of midges, and may call them gnats; both are correct, as 'gnat' is a general term for small fly.

Sand flies, which are often called 'biting midges', are found mainly close to water. Their bite can be very painful.

Oddly, the gnat enjoys a very specific climate, and refuses to go any farther north than a certain line of latitude, roughly 32.8N, or the area of the USA known to the world as 'The South', which is generally understood to be as far north as Kentucky, as far south as Northern Florida, and as far west as Lousianna.

The gnat is attracted to the heat, humidity, and carbon dioxide surrounding large mammals. It's an almost imperceptibly small bug, and infests many regions of the southern United States. Unfortunately, it is not nearly imperceptible enough, and this is what drives millions of Southerners mad.

People who might be concerned about inhaling or otherwise ingesting a bug, find that visually tracking the gnats' trajectories is nearly impossible. The common reaction is to flail one's hands about in an attempt to knock, usher, or scare away the gnats, and is completely ineffectual... except as comic relief to onlookers.

Gnats are completely harmless, and it's extremely unlikely that you'll actually inhale one; so relax. If you feel the hand-flailing reflex coming on, simply do as the Southerners do; purse your lips and lightly blow toward the beast. It's the most effective method of temporarily ridding oneself of the pest.