Venus Fly Traps Content from the guide to life, the universe and everything 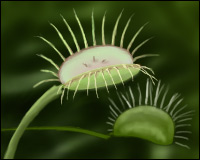 The Venus Flytrap (Dionaea muscipula) is the most well-known of the more than 500 species1 of carnivorous plants. You are not, however, likely to run into a four-feet-tall man-eating Venus Flytrap monster deep in any tropical jungle. This is because the Flytrap, disappointingly enough, is native only to the not-so-tropical coast of North and South Carolina, USA. It is actually a perennial bulb, and doesn't usually grow much larger than six or seven inches in any direction. It is also monotypic, meaning that it is the only species in its genus. Different varieties of Flytraps, such as the Dente, which has shorter, more menacing teeth, and the Akai Ryu, which is completely red, are cultivars of the Venus Flytrap; that is to say, they have been genetically modified to look like that, and are not actually a different species.

Like most insectivorous plants, the Venus Flytrap grows naturally in boggy areas where the acidic soil is devoid of the essential nutrients that plants need to grow. A long time back in its evolutionary past, the Venus Flytrap realised that it was never going to 'make it' unless it did things a little less traditionally. So it found a different means of getting its vitamins and minerals- by eating bugs.

The Venus Flytrap begins its hunt for dinner by secreting sweet-smelling nectar. When an insect lands on the head of the trap, it looks for the source of that yummy smell and walks right into the plant's open jaw. If the plant is lucky, the insect will promenade around the trap long enough to touch two of the usual three trigger hairs 2 located inside the jaw. When it does, the trap quickly snaps shut, trapping the victim inside. The victim's struggles only stimulate the plant to shut tighter, sealing the mouth and filling it with digestive enzymes3 rather like saliva. These enzymes dissolve the hapless insect, turning it into supper for the Venus Flytrap. After five to ten days, the trap will reopen, having licked the plate clean, so to speak, leaving only the indigestible skeleton behind.

If you would like to grow a Venus Flytrap but do not - like most of the global population - live in the Carolinas, then there are certain things you will need to know before you grow. In fact, even if you do live in North or South Carolina, there is some essential information you will need to raise a healthy and functioning plant.

As the Flytrap is so used to growing in an environment void of the basics, you will have to do your best to avoid pampering it. In fact, you will very likely find yourself bending over backward to avoid being too hospitable, putting more effort into 'neglecting' your Flytrap than you would into caring for a delicate exotic plant.

Firstly, the Venus Flytrap requires a moist environment to grow in - preferably with over 50% humidity. If you live in a semi-dry location then you will likely need to keep your plant in a terrarium. Luckily, terrariums are easy to make and care for, and are a pretty smart option, even if you live in a humid area.

A terrarium can be built out of a one-litre bottle, for one plant, or a fish tank, for several. The only criterion is that it be a clear, partially-enclosed container.

Make sure your terrarium never dries out. If you cover the top then the water will keep condensing and falling, removing the necessity of constant watering. However be sure to open the terrarium often, to allow your plants a breath of fresh air.

Growing Without a Terrarium

If you choose not to keep your plant in a terrarium, you can raise the humidity around it by placing a pan with about an inch of water underneath it. Elevate the pot so that the bottom is just touching the water, not submerged in it. The potting mix should stay wet, but not soggy.

Proper Care of a Venus Flytrap

No matter how or where you keep your Venus Flytrap, it will need a lot of indirect sunlight. A window facing south or a fluorescent light bulb on for ten to 15 hours daily will do the trick. But be careful not to use incandescent bulbs, as they generate too much heat - and don't place your plant in direct sunlight; it will very likely cook.

The water you use for your Venus Flytrap should preferably be rainwater, or distilled water. Tap water is full of chlorine and minerals that your plant's sensitive roots are unused to. If you must use tap water, let it sit for several days so that the chlorine has time to evaporate.

Do not fertilise your Flytrap! Flytraps are used to being deprived. Fertiliser scares them to death. Literally.

Insects and Other Delicious Edibles

The most enjoyable part of owning a Venus Flytrap is observing its eating habits. If your Flytrap is not in a terrarium, then there is no need for you to feed it at all. Eventually a bug will find its way to your plant and get eaten. And Venus Flytraps can get along quite well without eating for a month or two.

If your plant is in a terrarium, then it will be perfectly happy if you feed it a bug no more often than once or twice a month. If you find yourself addicted to watching your plant chomp down on helpless insects, then there are certain pointers you should be careful to follow.

Never feed your plant hamburger or any other protein and fat-based meat. Fatty meat will rot the plant and kill it. Venus Flytraps are insectivores. Their diet should reflect that.

Never feed your Flytrap more often than once a week. Every ten days is even better.

Artificially springing the traps, (with your finger, for example) drains the plant's energy, and can cause the head to become less sensitive and possibly die.

Live food is preferred, as the struggling insect aids in the digestive process. However, dead bugs can be fed to your flytrap providing they died of natural means - ie, not by pesticide. Crickets can be bought in the local pet shop and cut up to be fed to your plant. You can feed them to your plant using tweezers. Try to avoid touching the plant yourself.

Make sure that whatever you feed your plant is no larger than around a third of the size of the trap you are feeding it to. Large insects, as well as some ants, can cause leaf-burn, killing the trap and stressing the plant.

Venus Flytraps have an active season from May to October. During this period they will grow, and should be kept constantly damp. Temperature should be kept in the range of 21 to 35 ° C (70-90 F).

During the winter, Flytraps enter a period of dormancy for about three months. At this point most - or all - of the plant's foliage will die. The entire plant should be kept somewhere with a temperature range of 8 - 10 ° C (45 - 50 F). The bulb4 can also be removed, sprayed with fungicide, and wrapped in damp, living sphagnum moss, placed in a plastic bag, and refrigerated. Try not to expose the bulb to frost for an extended period of time.

Do not attempt to keep a Venus Flytrap active during its dormant period. The hibernation is necessary for its health.

When the Bugs Bite Back

Sometimes, especially in the springtime, Venus Flytraps can fall prey to the very insects it eats. Grasshoppers and caterpillars can devour large parts of the plant, but this is not very common. More frequently aphids infest the plant, slowly killing it. An insecticide might work, and some growers have had luck placing the plant in a plastic bag with a flea collar. Others claim that the easiest way to kill pests is to immerse the entire plant in distilled water or rainwater for 24 - 36 hours. Anything infesting the plant will drown, and the Venus Flytrap won't mind the dip too much.

If your plant has a black spot fungus, it is probably too humid. Treat your Venus Flytrap with a fungicide, and lower the humidity level.

If your Venus Flytrap is showing extreme signs of distress, don't give up on it. Trim back black leaves with scissors, and check the bulb for fungus. The bulb should be creamy white. Dust the bulb with fungicide and replant it. Even if most of the plant has died, the bulb stores enough energy to produce new growth. Some plants have been known to die back quite a bit while acclimatising to new conditions.

In short: Never give up on a Venus Flytrap unless the bulb is mush.

If your flytrap grows a flower stem with clusters of white blooms, trim it back when it reaches three inches. Although experienced growers can coax seeds from a flytrap, the flowers will exhaust and possibly kill the plant. Unless you are growing the flytrap for seeds, clip the stem before it gets too large. The flowers won't be too much to look at anyway.

The Life Cycle of a Venus Flytrap

In the first year a tiny seedling emerges, growing fully functional trap leaves of 1 - 2mm. The entire plant will rarely get larger than a penny. In the second year, after its first dormancy, the plant will grow to an inch across, and have traps up to 3/8 of an inch. In the third year, the plant will be even larger, with traps up to half an inch, now capable of catching large prey. The Venus Flytrap will get to be about two inches tall, and some may begin to flower. In the fourth to sixth year, the Venus Flytrap will have reached maturity, and will flower every year. Flytraps of this age may also begin to split beneath the soil, producing new bulbs that can be separated and repotted. In the seventh year and beyond, the Venus Flytrap will grow even larger, sometimes producing monster traps over an inch long. It may also continue to split and divide, producing larger bulbs each time.

1 Organisms that can interbreed with each other and produce fertile offspring 2Or one trigger hair twice. 3 These enzymes are proteases and peptidases that break down proteins into amino acids that the plant can reassemble into proteins when it needs them to grow. Also included among the enzymes are phospatases which break down phosphorus-containing compounds in animal bodies. The plant will use this phosphorus to make DNA.4 The onion-shaped central part of the plant that resides just below the surface of the soil