Carnivorous Plants Content from the guide to life, the universe and everything 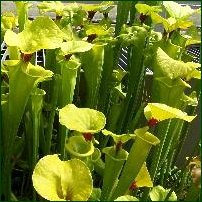 Carnivorous plants are plants that, instead of just getting the nutrients they need from the soil, consume other creatures as food. They live mainly on insects but some also eat small rodents and frogs. There are many different families of carnivorous plants, and they can be found all over the world.

Many carnivorous plants use similar methods to trap prey; so it is easiest to introduce them by how they trap their prey. There are four main types of traps with many different subtypes:

The pitfall, or pitcher trap, is usually a leaf that has fused together at the ends to create a tube with water pooled at the bottom. The insects are attracted to the plant by a secreted nectar-like substance that sends the animal into a stupor when it lands on the leaf. The insect then falls down the slippery trap and into the liquid below, where digestive enzymes begin to work on the insect's body.

The simplest example of this type of carnivorous plant is Heliamphora: The marsh pitcher of the Tepuis Mountains in Venezuela. This family is a very simple ground growing trap – just a leaf fused together to make a trap that fills with water. They also have a simple spoon (really an inadequate pitcher lid) to attract insects. Bacteria digest their prey for them.

Sarracenia: The trumpet, or North American pitcher plants, of the USA, are closely related to Heliamphora but this family has much more elaborate traps, which are usually brightly coloured and also grow on the ground. These traps secrete nectar, which attracts the insects and makes them drunk or dizzy. When the insect lands in the pitcher, it finds itself in an area with downward pointing hairs so it can only go further into the trap, and not escape by climbing back out.

Darlintonia: The cobra lily is closely related to Sarracenia and use a similar method but with one difference: these plants confuse the insects into thinking that there is a way they can fly out of the trap. These apparent holes are only fake windows, and the insects are stunned by the impact and fall into the bottom of the trap.

Nepenthes are vines that grow in southern Asia and Borneo, and they are the most elaborate pitfall traps. The pitcher is formed from a swollen leaf tip, and can be huge. The largest species is Nepenthes raja, which has been known to catch rats that come to drink water from the trap. The traps, like Sarracenia , produce a nectar that attracts insects to the trap. Once inside, the insect finds itself on a waxy area where it cannot keep its footing, and it falls straight into the digestive juices below.

Sticky traps simply trap the insect on a sticky substance. There are two different types:

Pinguicula: Butterworts looks like a perfectly normal plant. There are no signs that it is carnivorous. It works like flypaper, not attracting the flies, but just waiting for any that happen to be about to land.

Drosera: Sundews are more complex; they attract the insects by looking like glistening nectar, confusing the insects into landing on them. Once they have, they realise their mistake, because the glistening drops are really drops of glue on the tip of long tentacles that stick to the insects and block their pores. As the insect struggles, more of the tentacles move towards them, preventing escape. Sundews are found in bogs all over the world and come in both tropical and temperate forms.

The Dionaea muscipula (Venus flytrap ) uses a different method: the snap trap. Each snap trap has a few trigger hairs on its inside surface. If an insect touches a hair twice in about twenty seconds then the trap snaps shut. Very little is known about how this happens; what is known is that the reaction is triggered by an electric signal similar to nerves in animals. Though slower than the nervous reaction in animals, the Venus flytrap reaction is relatively fast.

Utricularia (Bladderworts) are the underground, or water based, carnivorous plant; they trap the insects in a bladder that grows off the main stem of the plant. The bladder has large guide hairs growing out of it; these guide the insects towards the closed mouth of the trap. At the mouth of the trap there are trigger hairs which stimulate the trap to open when the insect touches them. The insect is then sucked inside. The bladder is sucked into a concave shape by a vacuum contained inside, so when the trap opens, air and water rush inside, tumbling the insect along. After the insect is caught, the water is pumped out by absorbent hairs that release the water outside the bladder.

Like most plants, carnivorous plants need insects to pollinate their flowers. So how do they prevent themselves from eating their pollinators? Several methods have evolved toward this purpose.

Sarracenia have tall flowers— usually as much as twice as tall as the pitcher traps. They are usually pollinated by bees, which enter an internal platform in the flower through the petals. They then have to wiggle through the stamen and onto the stigma, where they pollinate it.

Sundews and Venus flytrap flowers both become quite tall, as well. They tend to have small flowers; only a few species have larger ones. Many are self-fertile, which means that if they are too effective at trapping their prey they can still reproduce.

Nepenthes flowers consist of a large number of tiny flowers on a large spike. They have four short petals from which the male or female parts emerge. They produce nectar to attract pollinators, however it is thought that much of the pollen is transferred by the wind.

Where to See Them in the Wild

Sarracenia can be found all over the United States of America, however the best place to see them is the Everglades in Florida.

Darlingtonia is native to the Rocky Mountains in the USA.

The Venus flytrap can only be found in southeastern North Carolina.

Sundews grow on every continent except Antarctica. The tropical species grow mainly in Australia. Three temperate species are native to the UK and can be found in Scotland.

Butterworts can also be found in the UK and in the Scottish highlands. The tropical species occur in Mexico. Bladderworts are found all over the world, including in the UK.

Borneo is by far the best place to see Nepenthes; 32 species of these plants are found there. Many are also found on Mt Kinabalu in Southeast Asia, including N.Raja. Nepenthes are found all through that area of Islands.

The name Nepenthes comes from the drug Nepenthe, used in the Iliad to alleviate sorrow and grief.

There are two species of carnivorous bromeliads.