Celebrity Bodyguards Content from the guide to life, the universe and everything 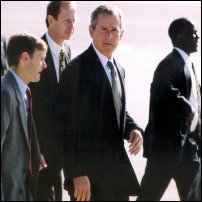 Security!
– Janice Dickinson's tongue-in-cheek response to the tongue-lashing she received from Lynne Franks in the 2007 jungle voyeurfest I'm A Celebrity...Get Me Out Of Here!

There was a time when the ultimate celebrity accessory was a tiny dog bedecked in jewellery, transported in a designer handbag. But now the popularity of the 'celebrity' (as opposed to 'star') has given rise to a new breed of human, that of the celebrity bodyguard – or 'personal protection officer' (if you're posh).

One of the most romantic films of the 1990s, thanks mainly to Whitney Houston's blockbuster smash hit 'I Will Always Love You', The Bodyguard added a touch of glamour to what must be one of the most dangerous occupations on the planet, ranking not far behind bomb disposal trainee and PA to a supermodel.

Not all bodyguards look like Kevin Costner or Nicolas Cage! If you're thinking of employing one: vetting is essential really, and if you're really famous, a confidentiality clause in the contract would be helpful. Otherwise, if you part company acrimoniously there's likely to be some tittle-tattle in the Sundays or maybe even a pending bestseller. For example: Tony Barretto told the world about daily life in the Britney Spears household after she sacked him for refusing to babysit her children. Now we all know why she shaved her head1.

Invisible, unless there's a threat. Prince Charles was giving a speech in Australia when a student with a grudge opened fire (twice) in a botched assassination attempt. Anyone who has seen the video footage would testify that they never saw the Protection Officer until the Prince was endangered, then there he was, using his body to protect the future king. Royal Protection Officers are usually serving members of the Metropolitan police force. Police are well suited to become PPOs because they are trained to 'protect and serve'.

A bodyguard will protect the principal by tossing himself between the threat and the principal while his buddies deal with the threat. He is trained to be part of a team of at least three people and usually more. Sometimes we find he is prepared rather to 'take one' for the team, if not the principal, because of a peculiar sense of honour, but they don't intentionally 'take one' if it can be avoided. They prefer to tackle the perp before the threat is realised, or tackle the principal to get them out of the line of fire. And, that the statistical likelihood of surviving a hit is rather good because the perp is normally aiming for a fatal point on the principal, and the randomness of throwing oneself into the line of fire is far more likely to take the hit in a survivable way.

Before deciding whether or not to sign up to become a trained bodyguard, you should consider the following 'job description':

It's a regulated industry by the Security Industry Authority SIA at bodyguard or Close Protection Officer (CPO) level, at normal security, and door supervision level. It is up to the person wanting to do the guarding to find a suitable course of training, and it is also up to the person wanting to be guarded to only accept someone with suitable credentials. Take care, or you could end up with a cross between Jimmy Fivebellies and André the Giant sporting appropriate accessories of sunglasses, earpiece, knuckle-duster-size ring, just-visible holster strap, etc. Coupled with the attitude of an enraged bull elephant, you would then have the stereotypical celebrity bodyguard. Caveat emptor2.

Or: This is how it's supposed to be.

Training includes some expected and other not-so-obvious drills:

Whilst doing a debus drill in a wallior we staged an accident. Full screw tells the boss it's clear to reverse, then gets the blokes all set. Boss faces backwards and off he goes. We then lie down in front of the wagon and play ran over. He panicked, jumped out while it was still reversing. Got his head tangled in the head set, slipped and broke two of his fingers. He still ran over to start first aid though. Bloody nice bloke!
– Anonymous trainee recounting a painful practical joke.

The upside of all this stress is job satisfaction, and, of course, the pay. The expected remuneration for a bodyguard in 2007 was £100 to £150 a day plus expenses for low-risk jobs, but when the scale of danger rises to high-risk, over £500 a day could be earned.

Some bodyguards are employed by interested parties to keep their prize earner safe from their own indulgences. For example: studio bosses hired bodyguards for John Belushi during the filming of Animal House to keep him from taking drugs; a herculean task. One, local cop Patrick Murphy, even did stunt driving in the film and co-ordinated fight scenes. His reward was being presented with an autographed original script signed by the entire cast, with a personal letter of thanks from the director John Landis.

You're female? That doesn't exclude you from being in the personal protection business. Have you seen Tom Cruise's sister on crowd control duty? Then there's Major Erica Bridge heading the King's Troop, The Queen's personal protection unit. Major Bridge was the first ever woman appointed to the post in 350 years.

Some bodyguards become famous in their own right. Take Steve Wilkos, for example. The former US Marine and later Chicago policeman was recruited for Jerry Springer's television programme in 1994, when security guards were required for a show about the Ku Klux Klan. Springer kept Wilkos on afterwards to help control guests and audience members as the show sometimes got a little out-of-hand. Eventually the audience began chanting for 'Steve' whenever they sensed overboiling pots, pre-volcanic action or just plain smelled blood. Wilkos became so popular with American audiences that NBC gave him his own talk show The Steve Wilkos Show in September 2007. Wilkos has even been featured in an episode of The Simpsons!

Another famous bodyguard is the thick-set ex-wrestler employed by Simon Cowell. Tony Adkins protects his boss from handbag-wielding female relatives of failed X-Factor auditionees. He also forcibly ejects the (sometimes seriously deluded) contestants who refuse to take 'No' for an answer and leave quietly after they've entertained the nation with their abysmal performance and made themselves a laughing stock.

Elvis Presley had a veritable army of bodyguards, who were collectively known as the 'Memphis Mafia'. Since his death some have stepped into the limelight to talk about their boss – it's almost as good an earner as impersonating Elvis.

Indira Gandhi, the Prime Minister of India, was shot dead on 31 October, 1984, by two assassins who were believed to be her own bodyguards.

It's a bad idea to hire security men who aren't trained for the job. Apparently, previous instances where rock bands had employed these people whose day job was riding motorcycles, there were no problems. However, at a free outdoor concert at Altamont on 6 December, 1969, the Rolling Stones hired the San Francisco Hells Angels for their security team and the event turned into one of the most violent and tragic concerts in rock history. Meredith Hunter, 18, was close to the stage brandishing a gun when he was set upon and stabbed to death by 'security men'. Witnessing this, lead singer Mick Jagger ceased singing and attempted to calm things down before requesting an ambulance. In total over 800 people were injured at that concert, and three other people as well as Hunter died: two were run over by vehicles while in their sleeping bags, and one person, reported as 'high on LSD', drowned in a ditch.

Unlike in Hollywood films, it's not a good idea to become personally involved with someone you employ, as it's practically impossible to remain professional and do your job properly if that line has been crossed. Princess Stephanie of Monaco had two children with her bodyguard Daniel Ducret, then married him but they divorced a year later. First Lady Eleanor Roosevelt was rumoured to have had a close personal relationship with Earl Miller, her bodyguard. Evidence of a deep affection between the two are some surviving letters and photographs. Princess Diana is said to have had an affair with one of her minders, ex-motorcycle policeman Barry Manakee, who subsequently died4 in a road traffic accident after he had been assigned to other duties.

It's a mad, mad world. A 'nobody' can appear on a TV show with their every move (including toilet/shower habits) recorded for the delectation of voyeuristic home audiences and suddenly they're the Next Big Thing. To suddenly go from a relatively-anonymous life to being stalked by paparazzi can't be that much fun, but it seems to be what some people want. The higher the celebrity, the more chance of attracting nutters, weirdos or just plain old stalkers. Those who can afford it get themselves a bodyguard to keep other people away. There's a hint of irony there, somewhere.

1Because she wanted the collar and cuffs to match.2Let the buyer beware.3This may not be so obvious.4No conspiracy theories here!5Allowing for inflation that figure would be worth around ten million dollars today.