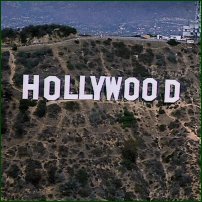 We've all seen it in countless movies and on just about every programme on the subject of the American film industry: HOLLYWOOD.

In the early 1920s the region of Los Angeles known as Hollywood was already home to a number of film studios and as a result the population was on the up. To meet the growing demand for housing, publisher Harry Chandler and movie director Mack Sennett decided to venture into property development in the Hollywood Hills. They set up a company and went into business building what would become the home of the Hollywood dream in Beachwood Canyon.

In order to advertise and brand their new properties they came up with the notion of a great sign for the development, and in 1923 the HOLLYWOODLAND sign was erected. Yes, that's right, Hollywoodland was the original sign planted on the highest peak in Los Angeles: Mount Lee. The letters were 50ft tall, 30ft wide and illuminated by 4,000 light bulbs. The whole site was monitored by a maintenance-cum-security man encamped in a small cabin behind the second L. The sign cost in the region of $23,000 to erect but when viewed from Beachwood Drive it spelled opulence.

The original plan was that the sign should stay in place for about 18 months - just long enough to establish the development, but it attracted tourists right from the word go, so it stayed.

The sign stood on the hill in all its glory for nine years without incident, but one failed Hollywood dream would change all that.

Peggy Entwistle was born in London but her mother died when she was very young, so her father moved them both out to New York. Tragedy struck again for Peggy when her father was killed by a passing car and at 17 she decided to make a career on the stage. She found work on Broadway but following some upsets in her personal life and in the grip of the great depression, she moved to Los Angeles to start again.

Peggy managed to get some work with RKO, but it wasn't the success she had hoped for. Following a night of drinking, her own depression set in and on 18 September, 1932 she got up close and personal with the Hollywood sign. She clambered her way up the slope to reach the sign, neatly folded her coat and placed it with her handbag, which contained a suicide note, at the base of a maintenance ladder. She climbed the ladder to the top of the letter H where she said goodbye to Hollywood and took a dive to her death. She was just 24 years old and her actions meant that she never got to read the letter which arrived days later offering her a starring role in a Beverly Hills Playhouse production.

Peggy's death came to epitomise the shattered dreams of Hollywood, and for a time were inextricably linked to the sign, but depression of a grander scale was also beginning to take its toll.

The stock market crash of 1929 had triggered a depression which saw the collapse of the markets - including the housing market. This meant that the property company could no longer pay for the sign's caretaker, so when his job was eventually cut in 1940 the sign began to suffer.

The sign stood unattended until 1949 when a storm took down the letter H.

OLLYWOODLAND was becoming a bit of an eyesore and a talking point - but not in a good way, so the local Chamber of Commerce stepped up. They offered to remove LAND and maintain the rest of the letters. So, at last we have the HOLLYWOOD sign.

The Chamber of Commerce did their best and worked hard on the upkeep until the 1960s, but it was a bit like painting the Forth Bridge since it was a never-ending task. They managed to enlist the support of a local club to try and keep up with the maintenance of what was fast turning into a white elephant. Unfortunately, just as the whole sign was sitting pretty following the fresh initiative, one of the Os fell off and crashed down the hill.

Still, love was all around in the 1960s and with a little help from its friends the sign became a celebrity cause. Adopt-a-Letter was launched by Hugh Hefner(Y) at his Playboy mansion, and he found some strange bed-fellows in Gene Autry(L) and Alice Cooper(O), who were each willing to part with $28,000 to finance their letters.

In 1973 the sign was named as an official historic monument, but that didn't stop further indignities. The late Danny Finegood was one of the most prolific sign-changers. His first assault on the sign was in 1976. On New Year's Day to celebrate the relaxation of marijuana laws, the student Danny hung fabric to alter the sign to read HOLLYWEED. In 1979 he honoured the visit of Pope John Paul II by changing it to read HOLYWOOD. In 1987 during the Iran-Contra hearings he managed to make it OLLYWOOD, but his grand finale was his political comment on the 1990 Gulf War when the sign read OIL WAR ... which was a bit of a cheat. Very few saw Danny's last offering due to the swift actions of Park Rangers who managed to remove his artwork before sunrise.

In 1992 the California Attorney General decided that, following competing claims, the sign's guardianship would lie with three agencies, the City of Los Angeles, the Chamber of Commerce and the newly created Hollywood Sign Trust. The sign is now protected by a fence and alarms - trespassers will be prosecuted, but not always.

The sign had a narrow escape in 2001 when a plan to repaint it red, white and blue was stymied by LA councillors. The prospect of showing support for US servicemen by emblazoning the sign in the stars and stripes was thought to not only be disrespectful to the flag, but would cause damage to the historical integrity of the sign. There were also fears that this might have resulted in the sign becoming a high profile terrorist target.

In early 2007, two Illinois teenagers holidaying in the area started a fire which threatened to see the end of the sign. The fire consumed 150 acres and required the efforts of some 200 firefighters to bring under control. The teenagers, while very sorry, were charged with the felony of arson.

For the more considerate and indeed energetic tourist there is (no thanks to the above teenagers) the opportunity to trek to Mt Lee from the surrounding Griffith Park. For the added expense of a little energy you can view the rear of the sign up close and of course the Los Angeles basin - well worth the extra effort.

Imitation is supposedly the greatest form of flattery, but it's doubtful if Hollywood would be impressed by some of the attempts to replicate their sign on the other side of the Atlantic.

In 2003 the Accrington1 Observer reported that local artists had lost the plot. In a competition to source six new landmarks for the town it was proposed that at a cost of an estimated £50,000 the name of the town could be spelled out in nine-metre-high letters on top of a local beauty spot. It was decided that the maintenance of a Hollywood-type sign would be more trouble than it was worth.

The sign has of course featured in many films including Mighty Joe Young (1998) and The Rocketeer (1991) - which also has an interesting alternative take on the removal of LAND from the sign. There is only one movie actually called Hollywoodland (2006) which revisits the famous Hollywood death of one-time Superman George Reeves. This movie is set some ten years after the LAND was lost. There is an official Hollywood Sign site on which you will find a more extensive list of movies in which it appears.

1Accrington is a small town in Lancashire, England.