Route 66 in California Content from the guide to life, the universe and everything 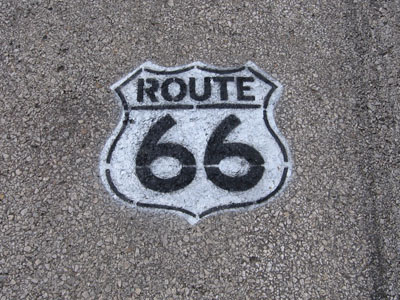 California. The destination. The terminus.

Millions of travellers bound for California's golden shores have crossed the Colorado River and traversed the unforgiving Mojave Desert over the years. Miners in the gold rush years, Okies in the dust bowl years, soldiers in the war years. After World War II it was American families on holiday, drawn to the adventure and romance of the west.

Of California's 320 miles of original highway 66, more than 90% are still driveable. Despite this, it is only remotely recognisable as a piece of American motoring history; what hasn't succumbed to the elements of the harsh Mojave sun has been absorbed by the endless urban sprawl of the Los Angeles metropolitan area. The Mother Road is still here, it's just difficult to see.

The old National Trails road that crossed the Colorado River at Topock, Arizona, was carried by a 1916 steel arch bridge; this became the first Route 66 crossing, taking westbound travellers into Needles, California. Although the steel arch bridge survives, it was bypassed in the 1940s by a red rock bridge, which was in turn demolished to make way for the interstate crossing. Needles is still the first town Route 66 travellers will encounter.

Needles, like nearly all western California Mother Road towns, is but a shadow of its former self, still clinging to life. Named for the pointed peaks of the Black Mountain range visible to the southwest in Arizona, it is the last vestige of modern amenities drivers encounter before striking the Mojave Desert proper.

Among the remnants of the highway's glory days, Needles offers the El Garces, a 1908 Harvey House. The El Garces was closed as a hospitality facility in 1949 and abandoned by the railroad in 1988, but saved by a preservation group. The 1920s Palms Motel is still standing as well, but now rents rooms by the month instead of by the day.

Prior to 1931, Route 66 bore travellers to Goffs, though even after it had been bypassed it survived for a time because drivers preferred the old road to the new one, which had a steeper and more difficult gradient. In modern times, Goffs is the first in a long string of ghost towns that once provided respite for desert-crossers. The Goffs general store is abandoned, but the classic 1914 mission-style schoolhouse has been fully restored and is now a museum.

Until Interstate 40 opened, Essex was a must-stop spot on the Route 66 map. The town's well was available to motorists to stock up on free water before making the treacherous desert crossing1. The well in Essex still stands, but is no longer functional.

Where the Cars Are

In the 2006 film Cars, hot-shot race car Lightning McQueen finds himself lost on the backroads on his way to a race in California. While the fictitious town of Radiator Springs is a conglomeration of many forgotten towns on the Mother Road, it is said to draw most heavily from Amboy, California.

Amboy was a lively mecca during the highway's prime. The town built itself around Roy's Motel, established in the late 1930s. By the mid-1940s the owners had added a service and repair shop and a cafe, and business boomed. Through the 1950s and 60s, Roy's had about 100 year-round full-time employees operating all three businesses 24 hours a day. In the 1970s when I-40 opened it was like someone turned off the tap - the flood of traffic turned into a mere trickle overnight. Amboy continued to survive for a time, but by the turn of the 21st Century there was virtually nothing left. The buildings still stand, and by all accounts remain in well-kept condition, but none are open for business.

In a seemingly endless trail of ghost towns, Amboy is but one more between Needles and Barstow, including Baghdad, site of the former Baghdad Cafe (no remains), Siberia (also void of features), and Ludlow. Newberry Springs is now home of the new Baghdad Cafe, the one that was featured in the 1987 film of the same name2.

Are We There Yet?

During the years that Route 66 was in commission, crossing the desert was one of the most dangerous parts of the journey. It wasn't curvy or hilly, but unbearably hot - summertime temperatures during the day could reach in excess of 120° Fahrenheit. Travel was only attempted during the evening or overnight hours to avoid the worst of the heat, and still cars would commonly overheat, leaving motorists stranded miles from the nearest service facilities.

The trek across the Mojave continues to be a treacherous path in modern times even though our vehicles are more sound and better maintained, not to mention air conditioned. It's still essential to carry plenty of water and, during the summer especially, to travel in the evening. In the age of the interstate the danger is that many of the towns that provided services to earlier travellers have died away in the absence of the traffic that used to be theirs, making services and amenities even fewer and farther between.

Most of the Mojave crossing is unremarkable, save for the occasional rock graffiti3 on the roadside. Then weary travellers come upon Barstow.

The hub of the Mojave is Barstow, the crossroads of several paths through the desert. For the Route 66 follower, the last leg of the trek is about half over. After the miles of unbroken sand it's a good place to stop, and it has its own Mother Road gems to offer sight-seers. Rooms can still be had at the El Rancho, built from the ties of a failed railroad. The last Harvey House on the old road is the Casa Del Desierto, built in 1910. This was the setting for the 1946 film The Harvey Girls with Judy Garland and Angela Lansbury. The Casa Del Desierto suffered damage in an earthquake in the early 1990s but has since been restored and now houses the Barstow Chamber of Commerce and the California Mother Road Museum (with free admission!).

From Barstow, Route 66 turns south for a bit, passing through Oro Grande and Victorville. On either bank of the Mojave River, both towns were settled on the promise of gold mining in the area but survived by the boom of the cement industry, providing the materials that built Los Angeles and the rest of southern California. Victorville has also been a popular filming location for classic westerns. Guests can stay overnight in the western-themed New Corral Motel and take in the Route 66 Museum before taking on the scenic drive through Cajon Pass to San Bernardino.

San Bernardino can easily be mistaken for the beginning of the end. Once considered the eastern end of the Inland Empire4, now it is the centre of nearly three million acres of San Bernardino County, part of the 35,000 square-mile Los Angeles Metropolitan Area. Though there is yet another 80 miles of Mother Road before Santa Monica it is easy to concentrate on the end of the road; the Pacific Ocean is less than two hours away. The observant tourist can still spy Route 66 remnants between the flashy contemporary storefronts that line much of the road from here to the coast.

The very first McDonald's restaurant was opened in San Bernardino in 1948, the building now houses a museum. In Rialto you can 'Do It In A Teepee' at the last of the three remaining Wigwam Village Motels. Rancho Cucamonga boasts one of California's oldest wineries and the Route 66 Memories curio shop. Before reaching Pasadena the road passes the 1926 Mayan revival-style Aztec Motel in Monrovia and the Foothill Drive-In Theater which is still screening films in Azusa.

The Colorado Street Bridge spanning the Arroyo Seco canyon in Pasadena predates Route 66 by more than a decade. Though the bridge has been restored and is still open to traffic, recent condominium development mars the picturesque quality the structure once had. The Arroyo Seco Parkway bypassed this bridge in 1940. Also in Pasadena, the 1915 Fair Oaks Pharmacy is now open as an old time soda fountain.

Although original plans called for highway 66 to end in downtown Los Angeles, the road was extended to Santa Monica as the Los Angeles area grew. This stretch of road passes through Hollywood, West Hollywood and Beverly Hills. They may be hard to spot amidst the modern structures of urban sprawl, but Los Angeles County has more than 30 locations listed on the National Register of Historic Places that stand on or within one block of old 66.

Officially, Route 66 ended at Ocean Boulevard, one block east of Palisades Park on the oceanfront. But after more than 2,400 miles, who's counting? Commemorating the end of the road is a plaque dedicating the Will Rogers Memorial Highway.

The End of an Era

In the 1970s California 66 was bypassed by Interstate 40 from Needles to Barstow, Interstate 15 from Barstow to Rancho Cucamonga and Interstate 10 from Rancho Cucamonga to the coast, robbing motels and attractions of the traffic they needed to survive. The franchising of the McDonald's name in the 1950s and the countless restaurants that sprang up copying their fast-food style surely contributed to the demise of the family-owned diners and drive-ins along the route.

The California Route 66 Preservation Society works to hold on to the relics that remain. They also sponsor the Route 66 Rendezvous in San Bernardino every September, celebrating the cars of the road with car shows and competitions.

1In those days it was common for service stations to charge for water. A dime would buy a glass of drinking water or a gallon of radiator water.2The new Baghdad Cafe is the former Sidewinder Cafe, a longstanding Mother Road business. The name was changed while the film was being made there, and when production wrapped, the name stuck.3Words or names spelled out in rocks or debris along the side of the road.4Vineyards and citrus groves as far as one could see.