Route 66 in Illinois Content from the guide to life, the universe and everything 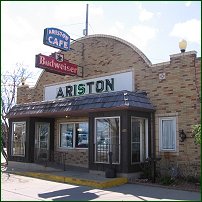 Grant Park in Chicago, Illinois, marks what was for decades the beginning of the Great American Road Trip. Route 66 started its southwestward progression from the intersection of Jackson Boulevard and Lake Shore Drive until traffic in downtown Chicago resulted in Jackson Boulevard becoming a one-way eastbound road. It retained its status as part of Route 66, the end of the line for eastbound travellers, but westbound 66 was relocated a block north to Adams Street at the intersection of Michigan Avenue.

Over the years, like all stretches of the Mother Road, 66 has taken different paths through Illinois but it generally followed the Pontiac Trail. The Trail, established in 1915, was the first major road from Chicago to St Louis, Missouri. Being an important route, it was one of the first slated for paving when funds were made available in the early 1920s, and as a result was completely paved by the time it became part of Route 66 in 1926. It was the first fully-paved highway in the state of Illinois.

Illinois had one of the longest stretches of Route 66. Along approximately 300 miles Illinois also has managed to preserve more of what Route 66 was than other states it passed through. Illinois 66 was bypassed by Interstate 55 in the late 1960s.

A Taste of the Past

Predominant among the remnants of 66 in Illinois are the restaurants. From Lou Mitchell's just a few blocks west of Grant Park to Scotty's Roadhouse in Hamel and beyond, classic cuisine isn't hard to find.

In Braidwood the Polk-a-Dot Drive-In began serving from a rainbow polka-dotted school bus in 1956 and has since evolved into a classic 50s diner and Route 66 landmark. The Riviera Restaurant in Gardner was a favorite hangout of Al Capone's. Cayuga is the home of the Old Log Cabin Restaurant, which turned its building around to face the highway1 when 66 was realigned to pass behind it instead of in front. The first Steak 'n' Shake appeared in Normal in 1934.

The Dixie Truckers Home in McLean is possibly the oldest truck stop in America. It has been open 24 hours a day since opening in 1928, except for one day after a fire in 1965. The Dixie also houses the Route 66 Hall of Fame which celebrates the people of the Mother Road. The Cozy Dog Drive-In has been a Route 66 mainstay since 1949 and is still run by its original owners, the Waldmire family. Just down the road in Litchfield, the Adam family has been serving travellers in the Ariston Cafe since 1924.

Servicing the Engine as Well as the Curiosity

Illinois 66 boasts several vintage gas stations enjoying a prolonged life under the protection of the Illinois Route 66 Preservation Society. The beautifully restored Odell Standard Station in Odell sold petrol from 1932 into the 1960s and continued to service cars until 1975 when it closed for good. William Soulsby opened Soulsby's Shell in Mount Olive in 1926, after his passing the station was run by his children until it could no longer pass EPA requirements and was closed in 1991. It underwent restoration in 2003 - 04. When Bill Shea's Service Station stopped pumping gas he continued to build on his collection of vintage gas pumps and now operates the old station as a service station museum. His exhibits even include a whole other vintage gas station.

Another old service station in Staunton is now Henry's Rabbit Ranch, which doesn't sell rabbits but does sell plenty of Route 66 souvenirs as the Route 66 Visitors Center. In Williamsville, Die Cast Auto Sales is also housed in a vintage station.

Other Points of Interest

The oldest business on Illinois 66 is still family-owned and still in the business it set out in. After settling Funks Grove at a grove of maple trees, the Funk family started making maple sirup in 1824 and selling it in 1891. Funks Grove Maple Sirup2 still sells out every year.

In La Grange, just south of Chicago, the Wishing Well Motel has been welcoming Route 66 travellers since 1941. Down the road in Springfield, the Pioneer Motel is another classic Mother Road fixture. The Land of Lincoln Motel in Granite City at the east end of the Chain of Rocks Bridge is the last chance for a vintage night's rest before crossing into Missouri.

Abraham Lincoln made his home in Springfield, Illinois, and so has the Lauterbach Giant. Giants were a common means of advertising in the 1950s and 1960s; standing usually about 20 feet tall they were easily seen by motorists driving by. The Lauterbach Giant stands holding a tyre in front of Lauterbach Tire on 66. Other giants in Illinois include the Jack Hammer Giant in Joliet, the Paul Bunyon Giant in Atlanta and the Gemini Giant at the Launching Pad Restaurant in Wilmington.

In Litchfield is the last remaining drive-in theatre on 66 in Illinois, the Sky View, which still shows movies during the summers.

For the Safety of Our Travellers

North of Litchfield near Raymond, Illinois, along a stretch of old 66 that is now frontage road for Interstate 55 stands the Our Lady of the Highways shrine. The nearby plaque declares 'Mary, Loving Mother of Jesus, Protect us on the Highway.' The shrine was erected by a local family in the 1950s to watch over Route 66 travellers.

1The building was 'turned around' simply by relocating the front door to what was formerly the back of the building.2As the Funk family, the grove and the maple sirup all predate Route 66, during construction of the highway it was arranged for the Funk property to be protected by a trust. In this same trust it is specified that the traditional spelling of 'sirup', with an 'i', should be used.