Missouri, USA Content from the guide to life, the universe and everything 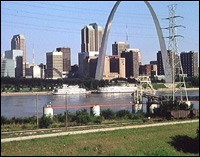 Missouri was the second territory of the Louisiana Purchase to achieve statehood1, joining the Union on 10 August, 1821, as a slave state under the Missouri Compromise. The Compromise awarded statehood to Maine at the same time, as a free state, so that the representation of slave and free states would continue to be balanced in Congress. Although a slave state, Missouri stayed with the Union during the Civil War, even while some of its residents fought for the Confederacy.

The state of Missouri covers 69,674 square miles (180,455 square kilometres) west of the Mississippi River, near the geographic centre of the United States (Lawrence, Kansas, 200 miles west of St Joseph, Missouri). It is one of two states surrounded by eight others:2 (from north, clockwise) Iowa, Illinois, Kentucky, Tennessee, Arkansas, Oklahoma, Kansas and Nebraska. The highest point is Taum Sauk Mountain in the Ozarks at 1,772 feet above sea level; the lowest is in the town of Arbyrd in the 'bootheel' at only 230 feet above sea-level.

Some other Missouri facts and figures:

Before the arrival of European settlers the area was occupied by several Native American tribes including: the Osage, Fox, Oto, Iowa, Missouri, Shawnee and Kansa. France made a claim on the land as part of the Louisiana Territory in 1682 and established the first permanent European settlement at Sainte Genevieve on the banks of the Mississippi River in the mid 1700s. By 1762 France had ceded the territory to Spain, who oversaw the development of a fur-trading post at Saint Louis a little further north at the convergence of the Mississippi and Missouri Rivers in 1764.

Spain secretly returned the territory to France in 1800, but when Napoleon Bonaparte realised he would have to abandon his hopes of a French empire in the New World he offered to sell the land to the United States. In 1803, the US purchased the Louisiana Territory from France for $15 million. President Thomas Jefferson then organised the Corps of Discovery, better known as the Lewis and Clark Expedition, to explore the territory in hopes of finding a water route to the Pacific Ocean. The expedition began on the banks of the Missouri River in St Charles, just west of St Louis, in May of 1804.

Missouri became US territory in 1812. When it became the 24th state in 1821, the state capital was temporarily set up in St Charles until a permanent location could be found. Five years later the capital was moved to a more central location in Jefferson City, just 20 miles north-east of the geographic centre of the state. The new capital building was completely destroyed by fire in 1837, rebuilt by 1840, and destroyed again by fire in 1911. The current capital building was completed in 1917. Meanwhile, in St Charles, the original state capital building, is still standing.

When gold was discovered in California in 1849, several Missouri cities were major points of departure for fortune-seekers going west. Wagon trains stocked up and headed out from St Joseph, St Louis and Independence, and Missouri became the gateway to the West.

The Lay of the Land

North of the Missouri River, the state is mostly glaciated plains with rich soil and most of the agricultural business is located there. Along the western state-line are the Ozark Plains, not as fertile but still farmable. Eastern Missouri is dominated by the convergence of the rivers. The largest land area in the state is the Ozark Mountain region south of the Missouri River. The Ozarks feature the Mark Twain National Forest and most of the state's caves, as well as the Lead Belt in the eastern part of the region. The far south-eastern corner and the bootheel form part of the Mississippi Lowlands, extending into neighbouring southern states.

The weather in Missouri must be seen to be believed. Officially it is classed as 'humid-continental', humid being the operative word. Summers typically start in mid-April and last through mid-October; winters cover most of December through to February. Spring and autumn are noticeable for rain and tornadoes. Annual precipitation varies by ten inches or more from north (~36") to south (~46"), mostly in the form of rain but with the occasional snowstorm thrown in for variety. Temperatures have been known to fluctuate by more than 30 degrees from one day to the next, but average summer highs are in the 90s and winter lows in the teens (temperatures in Fahrenheit)3. Don't let that fool you though, the highest and lowest temperatures on record in Missouri were both recorded in Warsaw (eastern Ozarks): 118°F on 14 July, 1954 and -40°F on 13 February, 19054.

The Nuts and Bolts

Early industry in Missouri centred around lead mining starting in the Lead Belt area near Potosi. Missouri now provides 90% of the nation's non-recycled lead. Other natural resources include iron ore, zinc, barite and limestone. In addition to mining, Missouri has active industries in transportation equipment including car manufacture and car parts, beer and other beverages, defence and aerospace technologies and food-processing. Missouri's three largest industries are manufacturing, tourism and agriculture, with major crops of soybeans (most profitable), sorghum, hay, corn, wheat, oats, barley, tobacco and rice. Half of the state's product in agriculture is from livestock, primarily cattle, calves, hogs and turkey.

Missouri is home to several corporations' world headquarters, including Anheuser-Busch, Solutia, Monsanto and Hallmark. The Bass Pro Shops world headquarters in Springfield is one of the state's most popular tourist attractions.

Known as 'The Cave State', Missouri has over 5,300 caves. Prior to the development of refrigeration technology, these caves with their naturally cool interior temperatures were essential to brewing beer. Beer was introduced in the US around 1840, and by 1860 there were 40 breweries in the St Louis area alone, each doing business in its own cave.

Not just for brewing anymore, many caves in the state are open to the public for tours including:

State parks in Missouri offer a wide variety of recreation, from the 1.5 billion year-old red granite Elephant Rocks to the 225-mile Katy Trail following the Missouri River from St Charles to Clinton. Route 66 passes through Missouri from St Louis to Joplin, and is highlighted in the Route 66 State Park. Trail of Tears State Park commemorates another famous path through the state, including a portion of the trail used by the Cherokees on their forced march from Tennessee to Oklahoma.

The Weinstrasse, or wine road, features 11 of Missouri's wineries. Weinstrasse follows State Highway 94 from St Charles to Jefferson City, roughly the same route the Katy Trail takes along the river.

With more than 30 theatres featuring live music and variety shows, Branson is the Vegas of the Midwest (without the casinos, of course). Country and western performers Andy Williams, Mickey Gilley, Ray Stevens and the Oak Ridge Boys all operate theatres in Branson, as well as comedian Yakov Smirnoff. The the Baldknobbers Theatre is a Branson original, there before Branson was 'cool'.

Kansas City is Missouri's largest city and has more fountains than any city in the world except Rome. It's well known for its barbecue, with more than 90 devoted restaurants, and hosts the largest barbecue competition in the world - the American Royal BBQ Contest - every October.

Also known for its music, Kansas City has a rich history in jazz dating back to the 1920s when city leadership largely ignored Prohibition, allowing bars and taverns to continue to operate. Musicians flocked to KC unable to find places to play elsewhere. Live jazz is still popular fare in many KC nightclubs.

Kansas City is home to two of Missouri's five major professional sports teams - the football Chiefs and the baseball Royals. It also features the American Jazz Museum, the Negro Leagues Baseball Museum and more than 40 art galleries including the Nelson-Atkins Museum of Art.

Missouri's status as gateway to the West is most celebrated in St Louis, home of the Jefferson National Expansion Memorial - better known as the Gateway Arch. The memorial also hosts the Museum of Westward Expansion.

The football Rams, the baseball Cardinals and hockey's Blues are all found in St Louis.

Missourians You May Have Heard Of

Missouri has sent its share of sons and daughters to fame, many to Hollywood including Kevin Kline, Scott Bakula, Vincent Price, Ginger Rogers and Betty Grable, to name just a few. Musically, it has spawned such performers as Josephine Baker, Charlie 'Bird' Parker, Melissa Ethridge, Chuck Berry, Sheryl Crow and Nelly.

John J Pershing of Laclede has been the only American to become a six-star general, General of the Armies, during his lifetime. Pershing was promoted for his service in WWI to the position that was created for him over all of the army. The official rank of General of the Armies has only ever been awarded to one other soldier; George Washington received this rank posthumously in 1976 to recognise his status as being above all other generals in the Army (including Pershing).

Mickey Mouse creator, and possibly the most famous animator of all time, Walt Disney, grew up in Kansas City and briefly considered building his first theme park near St Louis before deciding to go to Florida instead.

Mark twain is a river term meaning 'two fathoms', or twelve feet, when 'mark twain' was sounded it meant the water was deep enough for passage. Mark Twain is also the pen name of Sam Clemens, Hannibal native and author of American classics like The Adventures of Huckleberry Finn and A Connecticut Yankee in King Arthur's Court.

The thirty-third President of the United States was Harry S Truman of Lamar. When Truman became President Missouri adopted The Missouri Waltz as its official State Song, under the (mistaken) impression it was his favourite. Truman wasn't the first Missourian to hold the Presidency though, David Rice Atchison was President for a day in 1849 between the terms of James Polk and Zachary Taylor5.

Missouri has the reflexes of its own celebrated mules; this is a state with a kick.
- John Gunther from Inside USA

1Louisiana being the first.2The other being Tennessee.3For the metrically-challenged that would be highs between 32°C and 36°C, lows between -7°C and -10°C.447°C and -40°C respectively.5Taylor was a deeply religious man and wouldn't take the oath of office on a Sunday, when Polk's term expired.