Route 66 in Missouri Content from the guide to life, the universe and everything 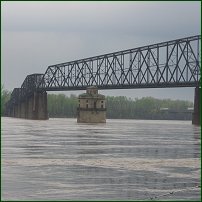 In 1936 Route 66 entered Missouri by way of the Chain of Rocks Bridge over the Mississippi River from Illinois. The bridge was built in 1929 as a toll bridge and was in service until 1968, which was a year after the opening of the New Chain of Rocks Bridge which carries Interstate 270 traffic across the river for free. Slated for demolition in 1975, the Old Chain of Rocks Bridge was spared when scrap metal prices plummeted and destruction was no longer financially viable. After being restored in 1997 the bridge was reopened in 1999 to pedestrian and bicycle traffic. Today travellers can begin their Route 66 Missouri excursion by parking, taking a stroll on the bridge and enjoying the view of the St Louis skyline in the distance to the south.

Although Route 66 has been decommissioned and entirely bypassed, the Missouri Route 66 Preservation Association still works to preserve and promote the route through the state. In 1990 they were successful in having the entire length of the Missouri alignments declared as a Historic Highway, and the state highway department has marked the entire route with markers stating such.

From St Louis, Route 66 used to wind a leisurely path through the Ozark Mountains to Joplin before crossing the Kansas state line. The path isn't so leisurely anymore as old 66 has been bypassed by Interstate 44. I-44 manages to go through most of the towns linked by 66 with a few exceptions, and your tour of Missouri should take you through Stanton, Rolla, Lebanon, Springfield, and Joplin. Once past Joplin I-44 completely gives Kansas a miss and goes straight for Oklahoma, but the original highway can still be followed.

In St Louis you should stop by Ted Drewes Frozen Custard at 6726 Chippewa. Drewes has been a St Louis institution since 1931, this location on old 66 was opened ten years later and is still open from February to December. In the summer heat you can enjoy treats such as the Dutchman Delight, Sin Sunday or the All Shook Up Concrete. In the cooler month of December Drewes is happy to sell you a Christmas tree with your custard.

Southeast of St Louis along Interstate 44 in Eureka the Route 66 State Park spans the Meramec River with a portion of the original route. The Visitor Center is inside the Bridgehead Inn, formerly known as Steiny's Inn, a 1935 roadhouse. The park is dedicated to the historic highway.

About another half hour down I-44 you will come to Stanton, Missouri, where you will find Meramec Caverns, one of the largest caves in Missouri. On several occasions the caverns served as a hideout for Jesse James and his gang, and it is also rumoured that the passages were part of the Underground Railroad1. The caverns were opened to the public in 1935 and include more than 26 miles of passages on at least seven underground levels. Meramec Caverns is open for tours year-round. 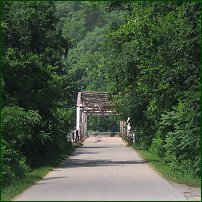 Continuing on I-44 you will pass through Rolla, home to a branch of the University of Missouri, before coming near to Devil's Elbow. In the early days of Route 66 Devil's Elbow was a prominent town along the highway. The bridge at Devil's Elbow offers spectacular views of the Missouri bluffs over the Big Piney River. Built in 1923, the two-lane bridge was bypassed by the four-lane Hooker Cut in 1941 which rerouted 66 to accommodate heavier traffic due to World War II preparations. In the early 1980s the Hooker Cut was bypassed by the new Interstate 44, taking the main route even farther from Devil's Elbow. The town has persevered and hungry passers-by can still enjoy a sandwich and a beer at the Elbow Inn.

After passing through Springfield, another host to the University of Missouri, the original route would have taken you through Carthage before coming to Joplin. I-44 misses Carthage, but if you miss it you'll also miss the 66 Drive-In Theatre. One of two drive-ins left on the Missouri stretch of 66 (the other being the Holiday Drive-In at Springfield), the 66 was first built in 1949 but was later left to ruin with the advent of the cinema. Saved and refurbished, the drive-in was re-opened in 1998 and now runs movies from April through September.

There are countless branded chain hotels all along Interstate 44, but to really get the feel of driving the Mother Road these should be bypassed without a second thought in favor of the original roadside motels. While the simple beauty of the Coral Court is gone, several others remain. Notable for their eye-catching neon signs, you're sure to find good old-fashioned hospitality at any one of these.

In St Louis there's the Wayside Motel or La Casa Grande Motel on Watson Road. A bit to the south in Gray Summit you'll find the Gardenway Motel which used to be adjacent to The Diamonds Restaurant. The restaurant is now closed, but the Gardenway is still a comfortable place to spend the night.

The Sunset Motel in Villa Ridge is a shadow of its former glory but still a viable option. A popular stop along the route is the Wagon Wheel Motel in Cuba made up of stone cottages. The Munger Moss Motel began as a barbeque restaurant in Devil's Elbow and has evolved into a motel. When the Hooker Cut moved Route 66 to bypass Devil's Elbow, the Munger Moss moved down the road to Lebanon2 and continues to enjoy renewed interest in the old highway.

You can still spend a night at the Rest Haven Court in Springfield, not to be confused with the Rail Haven Motel which is now a Best Western affiliate. The Boots Motel in Carthage opened in 1939 to serve not only Route 66 travellers, but also those on Route 71, its north-south equivalent. It's rumoured that Clark Gable once stayed in room 6 of the Boots. After closing in 2005, the Boots escaped demolition and has found new life as the Boots Apartments.

1The Underground Railroad was a network of secret locations that helped hundreds of slaves escape to the free states in the north before Abraham Lincoln's Congress passed the Thirteenth Amendment freeing all slaves.2The Elbow Inn is in the former Munger Moss Barbeque building in Devil's Elbow.