Route 66 in Oklahoma Content from the guide to life, the universe and everything 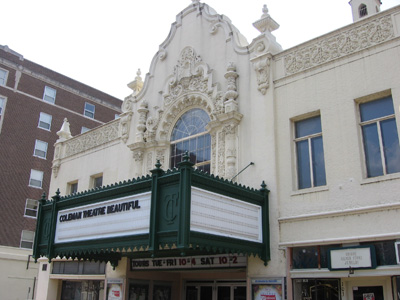 Cyrus Avery was always a proponent of improving American roadways, not only in his native Oklahoma but all across the United States. He placed himself in the midst of highway development as a member of or consultant to many boards and committees devoted to creating a new highway system. He spoke passionately at rallies and lobbied heavily on behalf of his home state.

His fervour and persistence paid off; when the highway system was finally mapped out, not only did a major east-west route pass through his hometown of Tulsa, Oklahoma, it passed right in front of his own service station and motel!

The Birthplace of the Mother Road

Of the eight states that 66 passed through, Oklahoma claimed the longest stretch - over 400 miles. These days, Oklahoma gets to claim the most miles of original, unmolested road that was the Main Street of America. With a few exceptions it is still possible to travel nearly the entire length of Highway 66 in the Sooner State, and some areas even maintain original single-lane roadway and original concrete pavement.

Oklahoma has more vested in the history of 66 than just its origins. World-famous cowboy Will Rogers was born near Claremore, and in commemoration Route 66 was renamed the Will Rogers Memorial Highway in 19521. The first Route 66 Highway Association was formed in Tulsa (although it was later chartered in Missouri), and after WWII the national Route 66 organisation was headquartered in Clinton. Clinton is also the location of the Oklahoma Route 66 Museum, Oklahoma being the first state to have an official museum. Down the road in Elk City is the National Route 66 Museum.

Even though Frank Phillips's Oklahoma-based petroleum company wasn't located on Route 66, many of the towns he marketed to were, so when deciding what to call his new gasoline the Mother Road came into play. Phillips 66 gas stations and their distinctive red and white highway shield-shaped logos are still found in 26 states. An early Route 66 promotional stunt to attract traffic to the new highway was the Great Continental Foot Race of 1928, sometimes referred to as the First Annual International Trans-Continental Foot Race, but more commonly known as the 'Bunion Derby'. Conceived at a dinner meeting of US 66 civic leaders in Oklahoma City, the race followed the entire length of Highway 66 from Los Angeles to Chicago before heading to New York. Of the 275 entrants from all over the world the race was won by Oklahoma's own Andy Payne of Foyil.

Mention of Route 66 and Oklahoma together often conjure recollections of John Steinbeck's 1939 novel The Grapes of Wrath. Like the Joads in this legendary book, thousands of Oklahoma farmers and their families fled the Dust Bowl2 during the drought years of the Great Depression with hopes of a better life in California. Joined by hundreds of thousands of migrants from Arkansas to New Mexico they experienced Route 66 as a road of defeat as well as one of opportunity.

Given Oklahoma's role in creating the Mother Road, ironically it was the first to bypass it. In 1953 the Turner Turnpike between Oklahoma City and Tulsa bypassed about one hundred miles of US 66 even before Eisenhower's Interstate System was created. After the Highway Act of 1956 was passed the turnpike became part of Interstate 44 which eventually replaced the entire length of 66 between St Louis and Oklahoma City. Although this would bring about the end of Highway 66 over the next thirty years, Oklahoma wasn't about to let go of its 66 heritage. In 1989 it was the first state to organize an historic preservation society devoted to the old highway, it was also the first to mark segments of the original route with historic highway markers which the other states later modelled their own on.

There's no other place
Like this place
Anywhere near this place
So this must be the place
-Sign in Texola, OK

Although this sign refers to the old tavern on which it resides, it could very well apply to any of the roadside attractions in Oklahoma. A giant whale, a round barn, a gangster hang-out, a totem pole and a ghost are just a small slice of the Americana to be found in the Sooner State.

Older than the road by at least a century, the Spook Light is occasionally seen in northeast Oklahoma near an old Quapaw Indian Reservation. The light has been seen as far away as Baxter Springs, Kansas, and Joplin, Missouri. In recent years it has been explained away as headlights off in the distance, but some sightings date back to the late 1800s, and Indian legend tells of sightings in the 1700s. The light appears to bob around about a mile in the distance and is rumored to be either an Indian or a miner using a lantern to search for his decapitated head.

From Quapaw, Route 66 passes through Commerce, hometown of baseball legend Mickey Mantle, before heading to Miami (pronounced 'my-am-ah') and the Coleman Theatre Beautiful. The theatre opened in 1929 and has never been closed, even in the midst of extensive restoration. This included acquiring and restoring the original custom-built Wurlitzer pipe organ which had previously been removed and sold. An unofficial visitors centre can be found in Afton at the recently remodelled Afton Station which offers a few Route 66 trinkets alongside a replica Packard Showroom.

The 'Largest Totem Pole in the World' isn't really the largest any more, but at 90 feet tall with a base circumference of 30 feet, it once was. The totem is part of Totem Pole Park in Foyil which features more than a dozen other totems as well as The Fiddle House, all the handiwork of Ed Galloway. Although the handmade fiddles showcased in the Fiddle House were mostly stolen in the early 1970s, the house itself remains, supported by an additional 25 totem poles. From Foyil to the southwest is the Will Rogers Memorial Museum in Claremore before coming to Catoosa, home of the Blue Whale. 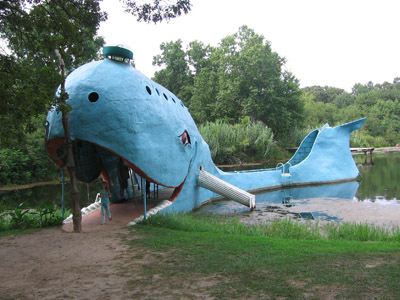 The Blue Whale of Catoosa has been a roadside oddity since the early 1970s. It was built as an attraction for a roadside water park and incorporated slides into the water and a sun bathing deck into its design. Nearby sits a building shaped like an ark that used to house an alligator exhibit. The water park closed in 1980 but the Blue Whale remains: it and a picnic area have been restored, but sit in the shadow of the abandoned ark.

The Main Street of America took many paths through the city of Tulsa over the years, an early alignment followed what is today Admiral Place. There isn't much of old 66 left on this stretch save for the Admiral Twin Drive-In Theater, the first of three left on Oklahoma's Mother Road. Many former gas stations, diners and motels have been razed in favor of more modernised conveniences. A later alignment on 11th Street crossed the Arkansas River on a beautiful Art Deco bridge. The bridge has been closed since 1972 and is awaiting preservation while traffic speeds past on a newer bridge nearby. The Metro Diner has fared somewhat better as a 50s-style diner that's a favourite with travellers and locals alike. The Western Capri Motel and Gateway Motor Inn still welcome nightly visitors just as they always have. KVOO-98.5 FM, the 'Voice of Oklahoma', has been broadcasting country and western favorites to 66 travellers since the early 1920s.

In Sapulpa, Frankoma Pottery has turned out handcrafted terra cotta pottery from local raw clay sources since 1933. The Rock Cafe in Stroud has been serving customers since 1939. A 1930s cottage-style Phillips 66 station has been restored in Chandler, and customers can fill up in vintage style, perhaps before setting out for another day on the road after a night in or at Chandler's Lincoln Motel. Just before reaching Oklahoma City, the famous Round Barn, built in 1898, sits along Route 66 in Arcadia.

Oklahoma City and Beyond

Again in Oklahoma City, Route 66 has more than one alignment. One goes past the Capitol Building, another cruises by the Milk Bottle Building - an oddly-shaped triangular building with a giant milk bottle on the roof. The capital city also offers barbeque at the County Line Restaurant, which reportedly features trap doors and false doors that in bygone years provided hiding places for gangsters like Pretty Boy Floyd. 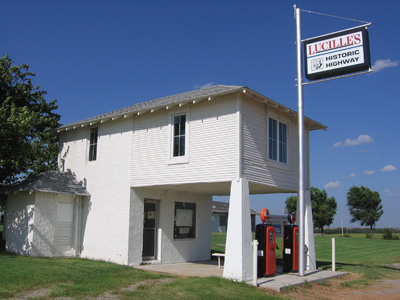 After a few hundred miles of southwesterly travel, once through Oklahoma City Route 66 heads more due west, and remaining roadside attractions are fewer and farther between. In Yukon, the Yukon Motel still welcomes Mother Road travellers just as it has for decades. Lucille's Store and Station in Hydro was a Route 66 mainstay until original owner Lucille Hamons passed away in 2000. The property was auctioned on Ebay in 2001. Weatherford boasts one of the few remaining Route 66 drive-ins, the 66 West Twin Drive-In.

In Clinton the Trade Winds Inn and Route 66 Restaurant remain, in the 1960s it was a favorite stopping place for Elvis Presley. On many trips Elvis stayed in room 215 until it was found out by the locals who then couldn't stay away. The Trade Winds is now a Best Western, but Elvis's favourite room is marked by a plaque on the door and breakfast is still served in the restaurant.

The Glancy is another vintage motel still welcoming 66 travellers in Clinton. Nearby is the Oklahoma State Route 66 Museum, which is reportedly a bit better than the National Route 66 Museum just up the road in Elk City, although both museums are well worth a visit. The remainder of Route 66 through Oklahoma fails to yield as many classic roadside treasures, although a few relics remain.

In 1999 the 106th US Congress passed the Route 66 Corridor Act which set aside ten million dollars as federal aid to states for preservation projects on Route 66. Oklahoma has plans to designate all remaining stretches of 66 as a State Scenic Byway which will afford it even more protection. The avid support the highway receives in its home state ensures its heritage will remain, allowing future generations to get their kicks on Route 66.

1In addition to his ties to 66 in Oklahoma, Rogers made his home on a ranch near the terminus of 66 in Santa Monica, California, after becoming famous in films.2During the droughts gusty winds whipped across the plains thieving topsoil and creating great dust storms all across the southwest. Loss of topsoil and lack of rains made farming all but impossible. Dust permeated everything, killing livestock and people alike. Those that chose not to migrate remained in the most abject poverty, many living in towns constructed entirely of cardboard and scrap.