Route 66 in Texas Content from the guide to life, the universe and everything 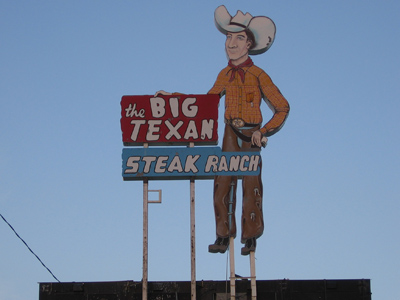 Route 66 maintains a relatively straightforward east-west path through the northern part of the Texas panhandle. The Main Street of America occupied 178 miles of Texas real estate from Shamrock to Glenrio, now fractured by Interstate 40 but still somewhat intact.

A word of warning: Don't stop to eat before Amarillo. Not that there isn't anywhere decent to eat along the road, you just need to build up your appetite on the way.

Thousands of miles from the Emerald Isle is Shamrock, Texas, a small town with a lot of Irish pride. The Saint Patrick's Day festivities in Shamrock include green-bearded men and 'jail' sentences for citizens not seen to be properly celebrating1. If you're not travelling in March you may choose instead to see the restored Tower Station and Cafe, formerly the U-Drop-Inn, a museum and visitor's center at the intersection of highways 66 and 83.

In its heyday, McLean, Texas, boasted 16 service stations and six motels, and for a time there was a Prisoner of War camp which housed German prisoners during WWII. At least one motel has survived, the Cactus Inn, recognisable by its 32-foot Saguaro Cactus sign still beckoning to weary travellers. McLean is also the site of the Devil's Rope Museum, home to the World's Largest Barbed Wire Collection in addition to some of the state's Mother Road memorabilia.

When Highway 66 was established in 1926, less than half of it had been paved. Into the early 1930s the four western states (Texas, New Mexico, Arizona and California) had less than 65 miles paved total between them. Amidst the wealth of unimproved road was the Jericho Gap, a treacherous stretch that stranded many a motorist in the mud overnight. Nearby residents could earn a living just pulling cars out of the Gap, which was located just east of Groom. Even though it was eventually paved, it was inevitably bypassed by later alignments. 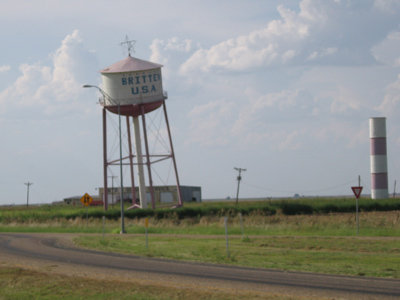 The 'Leaning Tower of Texas', or the Britten, USA water tower can be found in Groom. Erected with one leg purposely shorter than the other three to produce its dramatic angle, the tower is a remnant of the Britten Truck Stop. The angle was intended to pique the curiosity of passers by, inviting them to ask questions (and have lunch). While there's no longer anyone to answer the questions (or cook lunch), the tower remains a photo opportunity on your Route 66 journey.

The largest and oldest town on Texas 66 is Amarillo, notable for a couple of ranches. The Big Texan Steak Ranch has been an Route 66 feature since 1959. 'Big Bull', an 88-feet-tall cowboy invites hungry folks in to try the 'Free 72 ounce Steak'. The dinner is free to any diner who can eat the whole steak as well as the accompanying salad, baked potato, shrimp cocktail and buttered roll within one hour2. Cost of the meal for the unsuccessful is around $50, but don't be fooled - free dinners have been claimed by (among others) a 63-year-old grandmother, an eleven-year-old boy, and a ballplayer who ate the whole thing in less than ten minutes!

Once your appetite is sated, you should visit the other famous ranch in Amarillo, the Cadillac Ranch. Commissioned by Stanley Marsh, this roadside attraction features ten Cadillacs buried nose down in a row. It serves as a monument to America's road travel, and is quite a spectacular sight.

West of Amarillo you will pass through Bushland3 before arriving in Vega where a 1920s service station is now the Route 66 Club and Cafe. Vega is also home of the oldest hardware store on 66, Roark Hardware, in the event you're pondering home improvements as you're passing through.

What used to be Zella's Diner down the road in Adrian is now the Midpoint Cafe. It is located exactly on the midpoint of Highway 66: by the old road it is 1,139 miles east to Chicago, and 1,139 miles west to Los Angeles.

The last dot on the west side of the Texas map is Glenrio, a small town that straddles the Texas/New Mexico state line. Glenrio used to feature the First/Last Motel in Texas, whose sign still stands in front of an abandoned cottage. Now nearly a ghost town, in 1938 some scenes of The Grapes of Wrath were filmed here.

1All in good fun, of course!2You were warned not to eat before you got here.3Despite the obvious connection, this is not the hometown of either Presidents Bush.